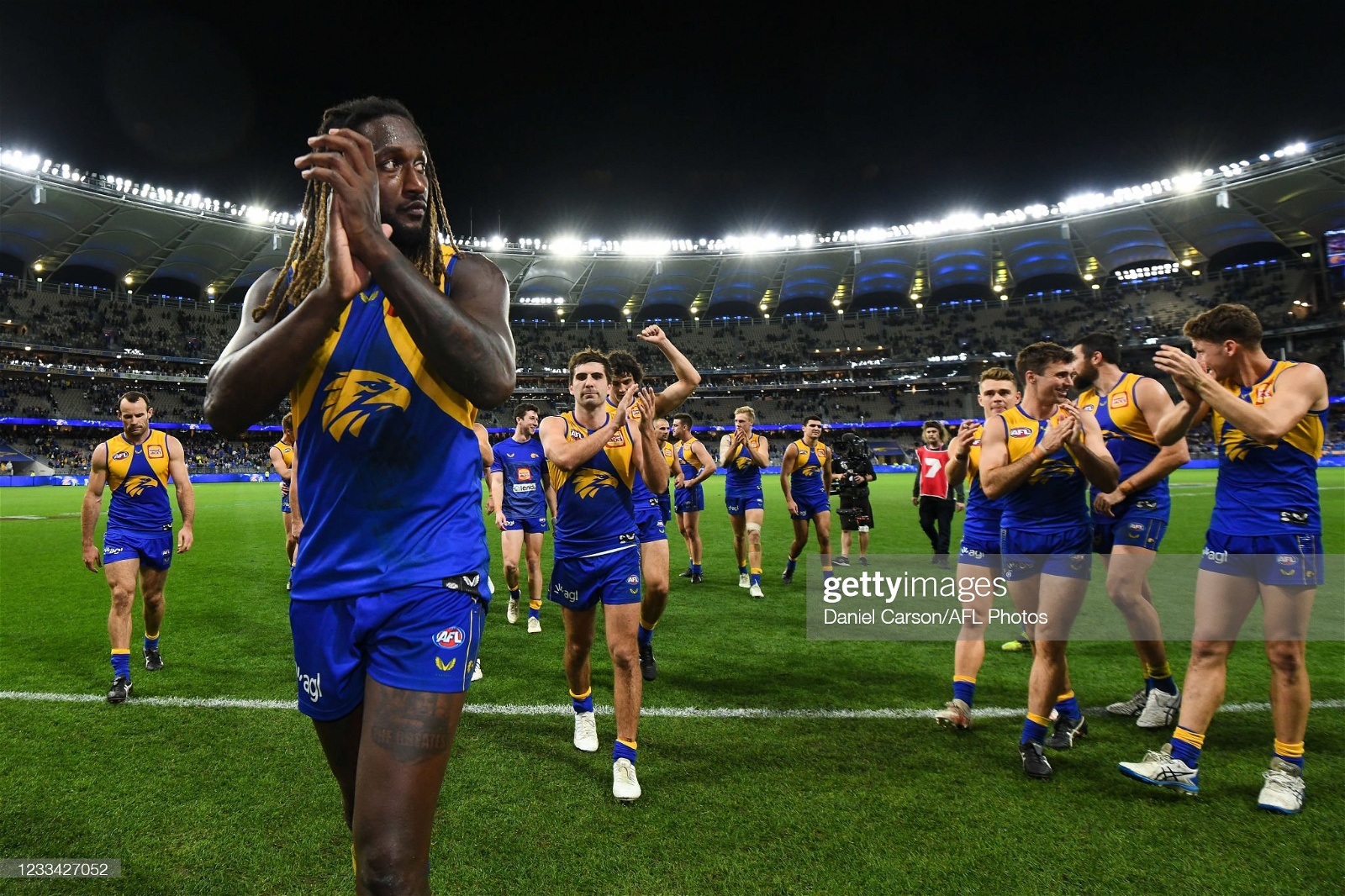 West Coast AFL Season Preview: Can the Eagles go from sore to soaring?

When it rains, it pours. The West Coast Eagles have started 2022 with a horror run of injuries, but is it all doom and gloom at Lathlain?

West Coast AFL Season Preview: Can the Eagles go from sore to soaring?

When it rains, it pours. The West Coast Eagles have started 2022 with a horror run of injuries, but is it all doom and gloom at Lathlain?

After missing finals for the second time in Adam Simpson's coaching reign, the West Coast Eagles had plenty of work to do for the 2022 season in an off-season from hell.

A concussion-related retirement, a vaccine-hesitant star, the AFLW pride jumper debacle, and a myriad of injuries - it's been the worst off-season for any AFL side.

Injuries are an ongoing concern for West Coast, as numerous of the best 22 players, missed several games last year.

However, last season wasn't all doom and gloom, as ruck Nic Naitanui played out a full season in spectacular fashion, and Willie Rioli finally made his return to the club. It came after two years in limbo awaiting his sanction for urine tampering.

Missing finals in 2021 should hopefully give West Coast the spark needed to take on 2022, but the off-season has could've derailed the blue-and-gold clad side before they hit the field.

How they can improve?

To improve, the West Coast Eagles needs to enter 2022 with a new game plan. It should enable quicker ball movement, pressure on the opposing ball carrier, and consistency, which fits current playing trends.

Even with the ball in hand, the movement was bordering on stagnant with little urgency and speed. As a result, the output was stunted tremendously, and they struggled to find avenues into its forward 50.

This was noticeable in the Eagles' usually impenetrable defence. At times a lack of pace and slow decision making caused the ball to reenter the defensive 50 only just after it exited.

In 2021, West Coast ranked 14th in contested possessions, which indicates a lack of output, but what's even more alarming is the tackle ranking. Overall, it laid a league-low 1070 tackles, with broken and missed tackles seen far too often in games.

In-match consistency is another area that needs improvement, as players struggled to play out full games. First and final quarter fade-outs proved costly, with the Eagles surrendering leads, or letting opponents run rampant and create a sizable margin.

For a team expected to make finals, the Eagles seriously underperformed missing finals for only the tenth time in their 34 year-long history.

While they had some resilient wins against Richmond and Carlton, and some big wins against Port Adelaide, Collingwood, and Fremantle, disappointing losses littered the fixture.

The Eagles struggled at GMHBA, recording 97 and 92-point losses against Geelong and Sydney. The 11-win Western Derby streak also ceased to the tune of 15 points in round 22 against Fremantle.

BRISBANE LIONS AFL SEASON PREVIEW: CAN THE LIONS POUNCE BACK?

West Coast's accuracy up forward will go a long way in helping them stay in games, even with limited supply.

Jack Darling's return to the club is welcomed by West Coast because of his accuracy in front of goal. He and dual Coleman medallist Josh Kennedy are one of the more dangerous key forward duos in the competition and can create headaches for the opposition defenders.

Under their tutelage is Oscar Allen and Jake Waterman, who has shown plenty of positive signs in past seasons. Bailey Williams is another taller option up forward, with the young ruck set to spend more time in the 22 as he prepares to take over from Naitanui.

Supplementary pick Hugh Dixon has impressed throughout the preseason and provides solid depth should a key forward go down with injury.

Willie Rioli and Liam Ryan have teamed up in the past to wreak havoc, while Jack Petrucelle, by all reports, is set for a break out season.

West Coast’s list has fallen victim to a deliberating injury crisis, making the 2022 campaign all the more difficult.

Many players are in doubt for the beginning of the season, including Elliot Yeo, Oscar Allen, Luke Shuey, Liam Duggan, and Luke Edwards. Tim Kelly will miss round one after returning a positive COVID-19 test.

Jamie Cripps, Dom Sheed, and Greg Clark will be sidelined for longer, as Tom Cole and first-round draft pick Campbell Chesser make their way onto the long-term injury list.

Forward Jack Darling returned to the club after meeting the AFL’s vaccination requirements, however, he too quickly succumbed to the injury curse. As did supplementary signing Tom Joyce only days after signing.

For the Eagles, it might be their final shot at a flag with their current list - a list that should’ve won more than the one flag in 2018.

Connor West hasn't put a foot wrong during the preseason and is set to lift in 2022.

The 22-year-old joined West Coast in the mid-season draft last year and made his debut in Round 18 against Adelaide. From there, he played another five games and became a valuable pick up for the Eagles.

Last season, West helped to patch up areas that needed improvement, including ground ball gets and contested possessions. He impressed on debut, showing he was capable of slotting into an AFL side and competing with the competition's best after only a couple of weeks of training with West Coast.

With a full pre-season under his belt, he is set to have a big year for West Coast - especially given the injury-caused vacancies left for him to fill in the midfield.

His uncompromising grit and attack on the footy was on display during the preseason derby at Optus Stadium and is a sign of things to come this season.

Injuries, an aging list and a tough pre-bye run will make it difficult for West Coast to crack the eight.

Winning opening games against Gold Coast, North Melbourne, Fremantle and Collingwood is crucial but will be challenging given the extent of the injuries. They can’t afford to drop these early games as Sydney, Port Adelaide, Richmond, Brisbane, the Bulldogs, Melbourne, and GWS loom in the next seven weeks.

However, if the West Coast Eagles can show a clear improvement in gameplay, and get more game time and experience in the kids, perhaps all won't be so glum down in Lathlain in 2022.