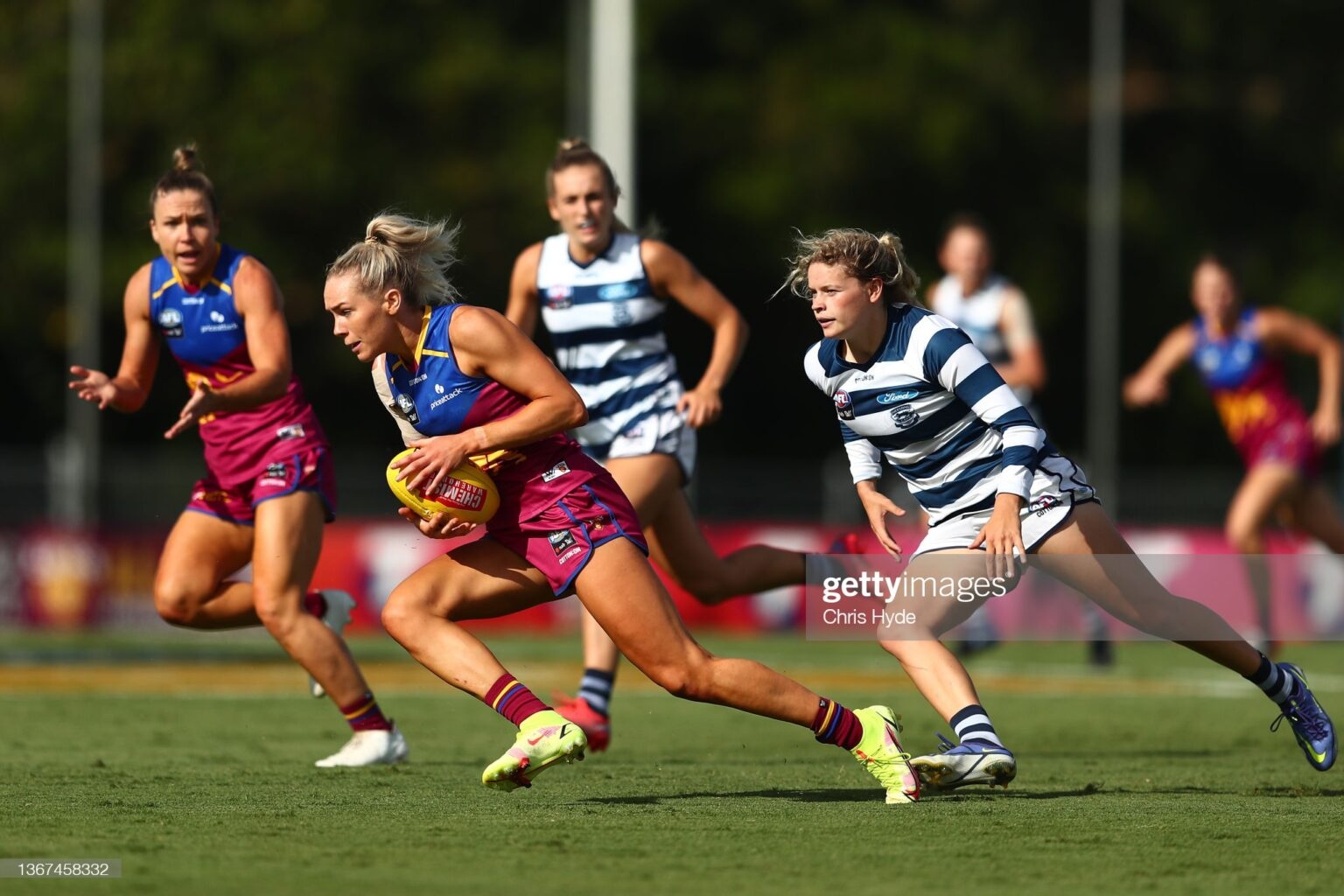 Wayward Lions hang on against Cats in AFLW thriller

Despite inaccurate kicking, the Brisbane Lions weathered a storm, and the fast-finishing Geelong Cats to win an AFLW thriller by two points.

Wayward Lions hang on against Cats in AFLW thriller

Despite inaccurate kicking, the Brisbane Lions weathered a storm, and the fast-finishing Geelong Cats to win an AFLW thriller by two points.

Despite being wasteful in front of goal, the Brisbane Lions have beaten the Geelong Cats by two points in Maroochydore.

Brisbane showed again that the forward pressure that it can apply is nearly peerless in the competition.

Geelong was the side to get on the board first, with Chantel Emonson getting the only goal of the first quarter, just three and a half minutes into the game.

The rest of the quarter was a show of forward pressure and fierce tackling, as both sides fought hard to keep the ball in their half of the ground.

The Cats' defence in particular proved tough to crack for the reigning premiers, as they forced turnover after turnover in the front half.

When Brisbane was able to penetrate Geelong's defence, the side was unable to capitalise on the scoreboard, with four behinds before Dakoda Davidson kicked truly on the shadow of half time.

The goal put the Lions in front by four at halftime, but the bigger point was a serious looking knee injury to Gabby Collingwood in the second quarter, in her first match returning from a left ACL tear. Collingwood immediately grabbed at her right knee, and raised her hand for the trainer, with a look of anguish that said she knew the seriousness of her injury.

The second half appeared to be more of the same for the Lions, as they found the ball inside 50, but were unable to convert in any meaningful way.

Eventually Orla O'Dwyer forced her way through the defensive pressure, picked up a loose ball and kicked truly, giving the Lions a second major.

Moments later, at the other end, Chloe Scheer kicked her first goal for the Geelong Cats since coming across from the Adelaide Crows. Scheer, a former North Adelaide star in the SANFLW forced a free kick from Indy Tahua, who used to play for South Adelaide in the SANFLW.

It was the first of three majors for Scheer, and it kept the Cats in the contest going into three-quarter time. The gap was just seven points, although the Lions had had seven extra scoring shots, they had just been unable to convert.

When Emily Bates goaled early in the last quarter, the gap was opening, before Scheer kicked two goals in three minutes to bring the Cats back on the brink.

Scheer had a chance to put the Cats in front late, with a set shot that she sent cannoning into the post.

It proved to be the final say for the match, as a summer storm rolled into Maroochydore.

As the rain crashed down, the intensity ratcheted up, as both the Lions and Cats laid more and more tackles and pressure. The defences each stood tall, with Jesse Wardlaw going back behind the ball for the Lions.

It proved a masterstroke as she picked up a couple of marks in the final quarter, and cut off the Cats attack in the dying moments.

In the end, while the Cats had the momentum, the clock, the rain, and the organised Lions defence proved too much, as the Lions held on for a thrilling two point win.

The Cats will take comfort from the performance, as they proved that they can match it with the established sides, and the heavyweights of the competition.

Georgie Rankin was emblematic of the pressure that the Cats wanted to apply, leading the way for the visitors with five tackles.

That pressure was the reason that the Lions dominated the inside 50 count 38-12, but were unable to convert that forward pressure to the scoreboard.

The Lions were not to be outdone with pressure, as Isabel Dawes and Courtney Hodder each laid seven tackles, and Emily Bates had six.

Bates led the way for the Lions with 24 disposals, while Tayla Hickey consistently gave the Lions first use of the ball, her 34 hitouts the second-best return of all time, and her 12 hitouts to advantage the third-most by any AFLW player ever.

The Lions will be thrilled with the win, but will likely be holding their breath that Gabby Collingwood's injury is not as serious as it seems.