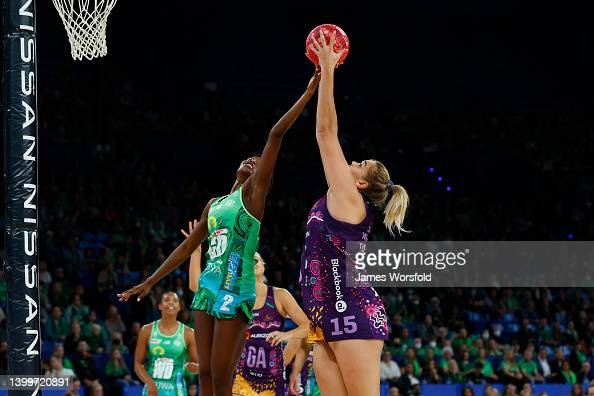 Wallam wins at home in First Nations Round

Wallam wins at home in First Nations Round

Going into the match, the win would push the Firebirds back into the top four, just in time for finals to roll around. When the two teams met in Round Three, it was, however, the Fever, who asserted their dominance in a 77-69 win.

The Firebirds had lost their last four games, putting them at four wins for the season. The Fever’s win rate reflects their position on the ladder, winning eight from eleven.

Noongar woman Donnell Wallam travelled back to her country to play the Fever in tonight’s match. Ahead of the occasion, Wallam commented on how “it’s really special that I get to travel back to my country with the Firebirds.

“It’s a really special feeling, that emotional and spiritual connection to my country and I hope that shines into this group of girls.”

It was the Fever who put down the first point, but the crowd were as equally as enthusiastic when Wallam made her first goal. Fellow Indigenous player Jemma Mi Mi made her first start for the season at wing attack. The pair are the only two First Nations players in the SSN.

The Fever’s work allowed the team to get ahead in the first five minutes. The team was missing Verity Simmons due to COVID-19 protocols and Jess Antiss, due to her foot injury.

Closing the first quarter, Gretel Bueta made a super shot, but not soon enough to count. This put the team down three, 15-18.

No changes were made to either team for the second quarter, kicked off by the Fever. It was goal for goal until a held ball was forced by the Firebirds. The Fever reacted quickly, with a three-goal run of their own.

During the Firebirds' tactical time out, Courtney Bruce moved into goal defence and Rudi Ellis came into goal keeper from the bench.

At the other end, Ruby Bakewell-Doran had been giving her all defensively, but had been unable to gain ball from her work. Her Nissan Net Points reflected this, sitting at -3.5 at half-time.

For the third quarter, the Firebirds lineup remained unchanged, while Chelsea Pitman and Sunday Aryang came on for the Fever. It was the Fever who broke the Firebirds' momentum to have slight buffer. The Firebirds responded quickly to this, to keep the pressure on.

There were six minutes to go and the Fever called a time out, with Coach Dan Ryan telling his team to “play big” and find super shots. Soon, the Fever gained from a turnover, allowing them to have a precious buffer.

Earlier in the quarter, Mia Stower had came on for Wallam, giving the team another option for two-point shots. Just before Stower made her first, Stacey Francis-Bayman left the court after rolling her ankle and Aryang came in at wing defence in her place.

Right on the buzzer, Stower made her second super shot. This put the teams 53-53, setting up for another cracking final quarter.

For the final 15, Pitman was in at wing attack, after appearing earlier in the game at centre. Stower and Bueta remained in the Firebirds' attacking end, and were up four after only three minutes. Francis-Bayman returned to court, this time at goal keeper.

The Fever reacted quickly with a tactical time out, looking for a super shot or two to stay in the game.

With a minute to go, Glasgow made a super shot that put the score at 68-71. The ball was in the Firebirds' hands, and all they needed to do was eat-up time. With a four point win, the team are now the second to beat the Fever at home this season.

Bueta was named player of the match, with a percentage of 97.6, making 40 of 41 attempts. She was the game’s leading Nissan Net Points scorer, at 137.5, her highest of the season.

Post-match, Bueta spoke about the game, sharing that the game "meant everything to us.

"Coming off four losses, for Nelly and Jem, First Nations Round, just to come together during the week and really knuckle down and grow that confidence within the group after four losses. I'm really proud of the girls."

Next week, the Firebirds will host the Giants for their home First Nations game on Turrbal & Yuggera Country. The Fever will travel to Sydney to play the Swifts.