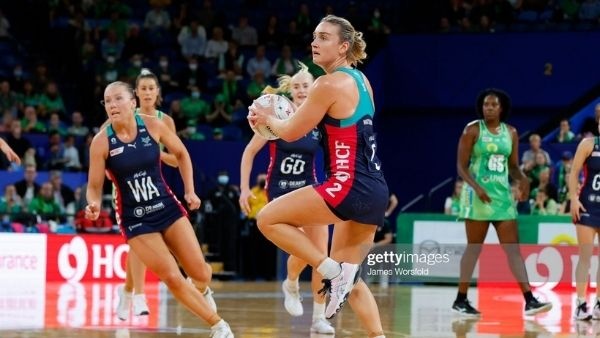 The West Coast Fever were dealt a double blow before the opening centre pass with Jess Anstiss (Foot) and Rudi Ellis (Covid health and safety protocols) ruled out of the match.

It was a different looking midcourt with Hannah Mundy in wing attack, Liz Watson in centre and Kate Moloney in wing defence.

The Vixens got off to a flyer with three consecutive goals before the West Coast Fever could get on the board, with Mwai Kumwenda getting off to a flyer. Olivia Lewis picked up where she left off from the last time these two sides matched up allowing the Vixens to regain possession.

A seven-point margin in the opening four minutes of the game saw Fever coach Dan Ryan to call a time out to try and stop the Vixens' momentum, with the Fever starting to get their groove.

Chelsea Pitman came onto the court wing attack to the start of the second quarter with Ryan looking to bring the speed in the Fever front line. An overcooked ball over the baseline in the Vixens attack end saw Jhaniele Fowler convert down the other end, bringing the margin back out to nine points.

A held ball call on circle edge for the visitors saw the Fever being able to take a step closer with the margin going eight points.

Courtney Bruce was able to stop the shooter-to-shooter pass coming up with the intercept with Fowler converting down the other end.

Kiera Austin kicked off the second power five of the match, giving the Vixens more breathing room with a seven-goal lead.

It was a Fever flurry that opened the second half with the Fever starting with a 5-2 quarter, with Bruce and Sunday Aryang really applying the pressure to Kumwenda and Austin.

Although a few turnovers from the Fever saw the Vixens bring the margin back out to nine goals, with Lewis continuing to have an impressive game.

A defensive rebound from Aryang saw the Fever bring the margin back to six with the defensive pressure from the Fever starting to increase. A super shot from Sasha Glasgow finished the quarter with the Fever going into the final break with a five-goal deficit to make up.

The Vixens started the last quarter just as they started the first, with a 5-2 quarter although Bruce tried to swing momentum back to her side with a nice intercept.

A timeout from the Fever was called to try to stem the Vixens' momentum with a chance coming with Aryang moving into wing defence and Stacey Francis-Bayman going to goal defence.

A tip from Courtney Bruce helped the Fever take the margin back to five goals with just under eight minutes to play in the last quarter.

A pick up from Emily Mannix saw the Vixen extend their lead back to eight goals ahead of the last power five of the game.

Three consecutive Supershots from Glasgow saw the final super shot period with a bang the margin bringing the margin back to four.

Although an offensive contact against Verity Simmons saw the game slip, with two minutes left on the clock and Kumwenda bringing the margin back out to six.

Speaking to the media post-match, Ryan was disappointed with his side's opening fifteen minutes of the match.

“You can’t be chasing the Vixens with that kind of scoreline and expect to win the game. Although we competed well in the second, third and fourth quarters and perhaps the opportunities to close the margin and swing momentum a little bit in our favour, the challenge after the first fifteen minutes was huge.

“We need to be better than that if we want to be beating a team like the Vixens so some hard lessons to learn in that game and simply not good enough early in the match.”

Looking at what went wrong, Ryan said that it was the attack end that was looking hesitant, feeding the ball into Fowler.

"It was the first five minutes where we were seven- one down and I think we got a bit nervous in attack when not sighting or sending to J [Jhaniele Fowler] when she was on and that allowed the Vixens to get a bit confident.

“Then we were probably a bit loose in defence and not locking down and doing our own job. We responded well after the time out to kind of get back to an even playing field and lock into what our responsibilities were individually, but the Vixens are the hardest team in the competition to get the ball off and they are so good when they are up and in control of the game.

“They just wear you down defensively and from an attack perspective they’ll move the ball until the right option opens and that’s taxing so every time you get a little opening or a little sniff you need to make that count, we didn’t do that well enough tonight.”

Melbourne Vixens coach Simone McKinnis said that her side was determined to get the win in what is the toughest road trip in the competition.

We came over here determined that we wanted to win the game,” McKinnis said post-match.

“It’s the toughest road trip and we’re doing it in the middle of a condensed season so to show how tough we are as a team and get the job done.”

McKinnis was impressed by the pressure and intent from her team right from the first whistle which is what set the Vixens up to win the game.

“I loved our start, I loved our ball movement and that just crispness and speed of ball movement. Defensively the pressure and having a go at the ball and just loved that intent and purpose right from the word go which was important for setting us up for the game.”

The West Coast Fever will remain in Perth to take on the Giants on Sunday afternoon at RAC Arena while the Melbourne Vixens will be back in Melbourne to take on the reigning premiers in the New South Wales Swifts at John Cain Arena on Saturday night.