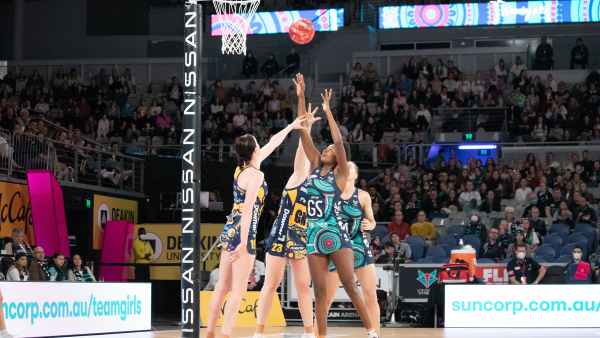 Vixens a step closer to minor premiership with win over Lightning

The Melbourne Vixens took a massive step forward in securing a home semi-final, defeating the Lightning by four points, 64-60.

Vixens a step closer to minor premiership with win over Lightning

The Melbourne Vixens took a massive step forward in securing a home semi-final, defeating the Lightning by four points, 64-60.

The Melbourne Vixens have taken a massive step forward in securing a home semi-final after they defeated the Sunshine Coast Lightning at John Cain Arena by four points, 64-60.

The Vixens move two games clear at the top of the ladder with the win, putting them on track to complete one of the greatest rises in the Super Netball history, going from wooden spooners to likely minor premiers.

Mwai Kumwenda opened the account for the Melbourne Vixens, getting the first goal of the match. A tip from Emily Mannix saw them jump ahead, sending the ball down the other end for a goal. Lightning Captain Steph Wood came off with what looked like a knee complaint, with Reilley Batcheldor taking her place on court.

A Mannix intercept allowed the Vixens to continue their fantastic start, pushing the lead out to six points. Wood came back on to the court late in the quarter, teaming up with Bactcheldor for the first super shot period.

A deflection off the hands of Jo Weston early in the second quarter saw the Vixens steam down the court and convert through Kumwenda. An Austin intercept in the centre third saw Kumwenda turn to post and extend the Vixens lead.

A Kadie-Ann Dehaney special allowed the Lightning to get one back, with Cara Koenen back on court doing the converting.

The Sunshine Coast Lightning brought the heat until the very end, winning the last quarter by two points, but the Vixens defence of Mannix and Weston were able to weather the Lightning storm and the Vixens came out on top.

The Lightning were able to win the second and fourth quarters, but it was the first and third quarter that allowed the Melbourne Vixens to create the foundations to win the match.

Melbourne Vixens' coach Simone McKinnis was impressed with the way that her side started the match, as well as being able to keep calm in those remaining minutes.

“You look at that last quarter just the fight the composure the heart that they show in the moments when it's really tight.

“I mean, Lightning had a good game and they were shooting beautifully in two point shots up until then so just to maintain that composure and keep working it and playing our game. I thought that was really pleasing, it means we maintain that position.”

While McKinnis didn’t notice too much of the physicality during the match, she said that it's important her side stays in play and contests hard.

“I actually didn't notice it so much that it was particularly physical. I think, that is each game that you play. It's quite tightly contested, so I didn't really notice that, but I think it's for us, it's important that while we want to contest hard and then be putting pressure and dictating, it's about that balance between staying in play as well is really important for us."

McKinnis said the Vixens were happy that they were able to do the dress proud, with their First Nations Round dress designed by Arrernte woman Bri Pengarte Ampa Hayes, who is an emerging First Nations artist.

“It's been a really, really nice week for us. We met Bri along with Gabby [Coffey] as well earlier in the week, where we heard their stories, and we heard the story about the design. It was just really enjoyable, and it just grows your curiosity, but I know that everybody was really proud to wear it out there today, having understood the meaning and part of it was about that resilience, fearlessness and togetherness.

“So, we were very aware of that and proud to be wearing it and hope Bri enjoy seeing us out there with it.”

The Vixens have the Adelaide Thunderbirds next week and then the Collingwood Magpies in the Queens Birthday clash to close out the regular season. With those teams fighting for a spot in the top four, the Vixens aren’t taking these upcoming games lightly.

“It's a challenging back end of the season, like today, Thunderbirds and then Magpies because they're teams that have either got nothing to lose or are fighting for their survival.

“[It's] a really good challenge for us to be able to maintain our standards to be working hard and pushing ourselves and challenge ourselves to be as best good as we can be.

"We want to win, we want to head into a final series having wins behind us, and we don't want to be giving anyone a free leg up in their positioning. So, it's about our execution and playing and maintaining standards for ourselves, and we want to finish minor premiers - that's important for us, that sets you up for hosting.

"It's a long time since our fans have seen us play in finals, so that opportunity to host the final that gives you a great opportunity, then you might be able to host the grand final here and our fans who have pledged for a couple of years without being able to play, that would be really rewarding.

“We'd get great satisfaction from that.”

The Melbourne Vixens head to Adelaide to take on the Thunderbirds, while the Sunshine Coast Lightning will host the Collingwood Magpies at USC Stadium.