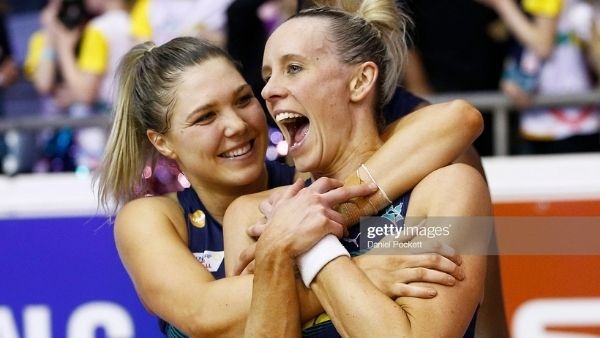 Vixens sensory room to be renamed after Ingles family

The Melbourne Vixens have announced that they will rename their globally certified sensory room after Vixens' legend Renae Ingles and her family.

Vixens sensory room to be renamed after Ingles family

The Melbourne Vixens have announced that they will rename their globally certified sensory room after Vixens' legend Renae Ingles and her family.

The Melbourne Vixens have announced that they will rename their globally certified sensory room after Melbourne Vixens' legend Renae Ingles and her family, ahead of their clash against the Magpies this weekend.

The sensory room, which will be now known as the Ingles Family Sensory Room, located at John Cain Arena, is the world's first KultureCity-certified sensory inclusive space for netball.

The room provides a comfortable and inclusive space for fans who are on the autism spectrum to enjoy the netball with their families at Vixens' home games. The sensory room offers activities such as colouring and toy blocks, and includes headphones, beanbags and soft toys.

Seats are available either behind or in-front of the glass, so fans can enjoy all the action of the netball in the comfort of the Ingles Family Sensory room, without all the noise of the game.

KultureCity is a leading not-for-profit organisation that focuses sensory accessibility. Renae and her husband Joe, sit on the board of KultureCity as passionate advocates for autism and sensory disorder awareness. Their eldest son, five-year-old Jacob, was diagnosed with autism spectrum disorder three years ago.

"It means everything to us to have this room named after us, we’re passionate about all that we do at KultureCity,” said Renae.

“We’re really excited to be honoured in this way, and that more families get the opportunities that we get with the sensory space at John Cain Arena.”

“We’re very passionate about the netball and in particular the Melbourne Vixens. We plan on going to the netball for years and years to come, and this means that we can bring Jacob to the netball.”

“We're proud to be leading the way by offering the world's first KultureCity-certified sensory inclusive space for netball.

“Renae and Joe are wonderful advocates for autism awareness and beloved members of the Vixens' family – we’re privileged to be able to name this initiative in honour of the entire Ingles family.”

Renae was a foundation player at the Melbourne Vixens when the team was founded in 2007 and played an important role in the club's first championship back in 2009. Ingles returned to the Vixens in 2018-19 after the birth of her twins, Jacob and Mila.

At all Melbourne Vixens home games, fans can purchase tickets to watch the match from the Ingles Family sensory room or collect a KultureCity pack from the information booth at John Cain Arena.

The Melbourne Vixens host the Collingwood Magpies in the first edition of the Melbourne derby for 2022, at John Cain Arena on Sunday from 4 pm AEST.