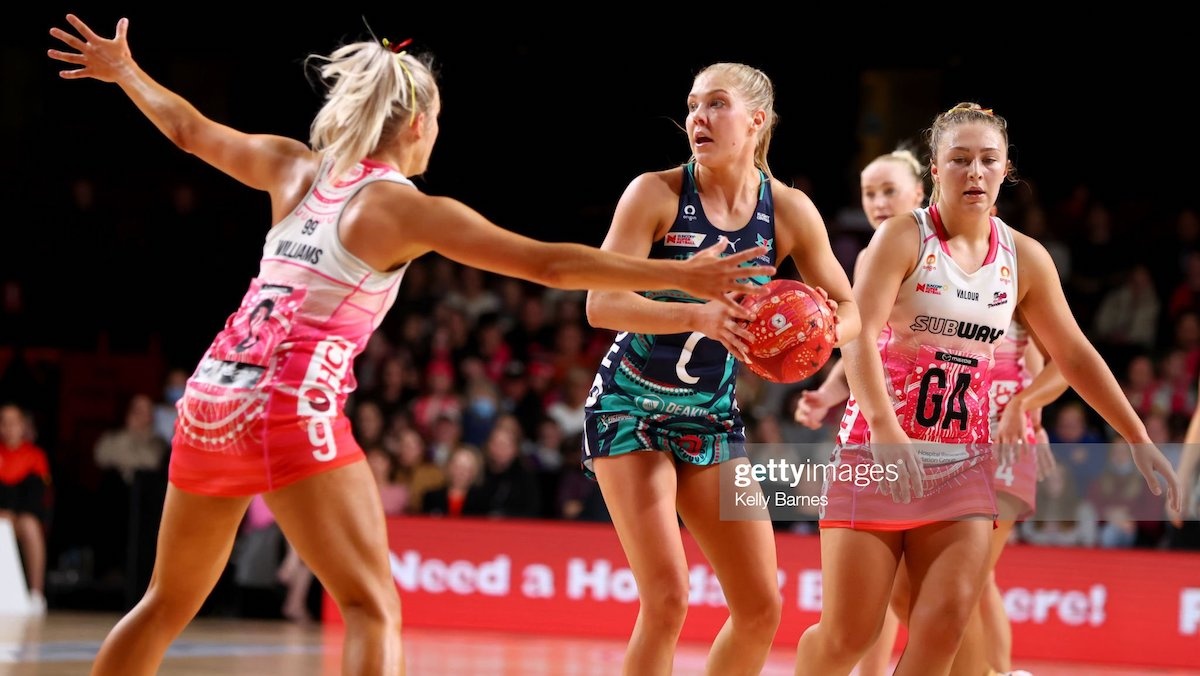 On Kaurna Country in the second weekend of First Nations Round, the Thunderbirds led for much of the evening, but didn't have the stamina to fight off the Vixens, who swung the momentum in the final 15 minutes.

An eight-point turnaround in the last pleased coach Simone McKinnis, who thought the hard-fought win had some important lessons for her side coming into the finals.

"Last quarter was great for us, I was really impressed with the way that we stood up and finished that game out, but it was a tough, tough game.

"Thunderbirds did some great stuff and played some really good netball, but it was obvious that they had a lot on the line in their season.

"But I'm really happy with the way that we found a way to get that win."

The loss was "a bitter pill to swallow" for Thunderbirds' coach Tania Obst.

"I just think it shows the margins in this league and how ruthless you need to be, and we're not there yet, and we got a lesson in that last quarter from the Vixens on how to play out a quarter, but for three quarters we were fantastic.

"So I really commend the girls on that, the team on that, and the last quarter was a bitter pill to swallow."

With Lenize Potgieter back in goal shooter, first advantage went to the Thunderbirds, who scored the first two goals, but the Vixens capitalised on a turnover and brought the scoreline back on the centre pass.

Latanya Wilson responded with an intercept and Tippah Dwan made the shot to keep the lead in the Thunderbirds' favour.

Austin converted off a ball-handling error from Potgieter, and the game went goal for goal.

A held ball call against the Thunderbirds resulted in an Austin conversion, and a couple goals later it was time for Obst's first time out.

Four in a row to the Thunderbirds, forced McKinnis into her own time out to try and find the Vixens' rhythm again, but from the centre pass the Thunderbirds converted comfortably.

In the Power Five, Austin looked to go for two, but passed off to Mwai Kumwenda under the post and then Dwan's super shot gave the Thunderbirds a strong lead, 13-10 at quarter time.

It took almost two minutes for the first score of the second quarter, when Kumwenda put one in after the ball had gone from end to end.

The Vixens scored three in a row to put scores level again, and another to Kumwenda gave them the lead.

Adelaide worked the circle well, but so too was Melbourne and its triangles.

Off a Sterling rebound, it only took three passes to get the ball in the circle, luckily Dwan was on the ball and used her leap to keep the ball in play. However, in the circle Potgieter was unable to convert.

Matilda Garrett entered the game at goal defence midway through the second, shifting Wilson out to wing defence and Hannah Petty into centre.

The Thunderbirds responded, following a technical time out, with two in a row and entering the Power Five, they were back in front by two. That margin was quickly drawn level with an Austin two-point shot.

Going goal for goal to end the quarter, the game was all square at the main break.

There was a midcourt shuffle for the Vixens coming into the second half, with Hannah Mundy moving into centre and Kate Moloney into wing defence, sending Kate Eddy to the bench.

Early in the third, Garrett left the court with an injury, returning Adelaide to its original midcourt arrangement with Williams at centre and Petty at wing defence, Wilson moved back into the circle with Jamaican teammate Sterling.

Obst confirmed post-match that the extent of the injury is unknown, but it is a calf issue that meant she was unable to return on Saturday night.

Olivia Lewis rolled on into goal keeper to try and stop the Thunderbirds attack, but after a time out, the Vixens returned to their original midcourt line up with Eddy at wing defence and it didn't have the response they were after.

The margin pushed out to as much as seven, before the Vixens started pulling it back in again with strong pressure over the ball.

A turnover out of court off the hands of Dwan sent the netball back down the Vixens end, only for Kumwenda to go up for a two point shot and get called for held against the springing defence of Wilson and Sterling.

The home side held a four goal lead at the end of the third, and the Adelaide Entertainment Centre crowd was certainly up and about.

With the goal set, the Vixens came out firing. Adelaide made a change going into the last, Williams' seven turnovers put her to the bench with Elle McDonald entering the court at centre.

A time out to the Thunderbirds was needed to reset, with Kumwenda jumping up and down getting around her Vixens after they'd pulled the margin right in.

Another change was made by the Thunderbirds, who switched Georgie Horjus into goal attack, pushing McDonald into wing attack and bringing Williams back in the action at centre.

Sterling picked up an intercept that gave the Thunderbirds the advantage again, but it was by no means a convincing lead, just one turnover.

Another deflection off the hands of Wilson pushed the margin back out when Potgieter converted. Though, conversion wasn't Potgieter's strong suit on the centre pass following a Vixens' time out, with a second attempt from under the post rebounded by the Vixens.

Dwan came on at goal shooter for the Thunderbirds, as they looked to exploit the Power Five and give the Vixens' defence a different challenge.

Both teams opted for one point shots in the final few minutes of play, some expert time-wasting by the Vixens as they passed the ball around for about a minute was exactly the finish you'd expect from the top team in the competition, now officially minor premiers.

Despite the support of a very healthy crowd in Adelaide, the Thunderbirds went down by four.

While this week's news about thehosting rights of the grand finalcertainly could have distracted the Vixens, McKinnis was adamant her side had moved on from the decision very quickly.

"We had to let the girls know, because I wanted to let them know, rather than them hearing it some other way. But that was like, okay move on, it's not in our control, and we get on and do what we do.

"And that's play, that's what's in our control, is how we perform out on court."

VIXENS A STEP CLOSER TO MINOR PREMIERSHIP WITH WIN OVER LIGHTNING

GIANTS TAKE DOWN THE THUNDERBIRDS TO STEAL THIRD SPOT

Speaking after the match, Obst was thrilled by her team's opening three quarters and was visibly devastated, just like her players, about the final minutes of the game.

"I think we were untidy with our through court attack at times, I think we could have been more up in all honesty, especially in the first quarter. I think we wasted a little bit too much ball and we weren't rewarding leads, and then were having to reset.

"So we made it a little bit more difficult than what it had to be, but again that's where we're at, at the moment, I think.

"That's really positive for us, [that we took it to the top team], it is, and I think that we did play really well. We had some really fantastic passages of play for probably, what, 50, 50-odd minutes of play, and then just really fell away at the end. Disappointingly, that probably takes away our opportunity for finals now, which I know was sort of still on the cards, I think.

The experience of playing in front of another loud, opposition crowd can only benefit the Vixens, who prepare to play a major semi-final at home before hopefully travelling to Perth for the grand final.

"We certainly take lots of learnings out of that. There was some poor execution and disappointing basic skills out there on court, which was also due to the pressure that they were under.

"We need to tidy up a little bit, and we'll choose some things to work on and another big game, we've got the local derby against the Magpies on Monday-week. So, that's important for us to really be putting out the best netball we can heading into finals...

The Adelaide Thunderbirds will end their season with a trip to Perth to face the West Coast Fever, while Melbourne Vixens will return home for the derby with Collingwood Magpies.