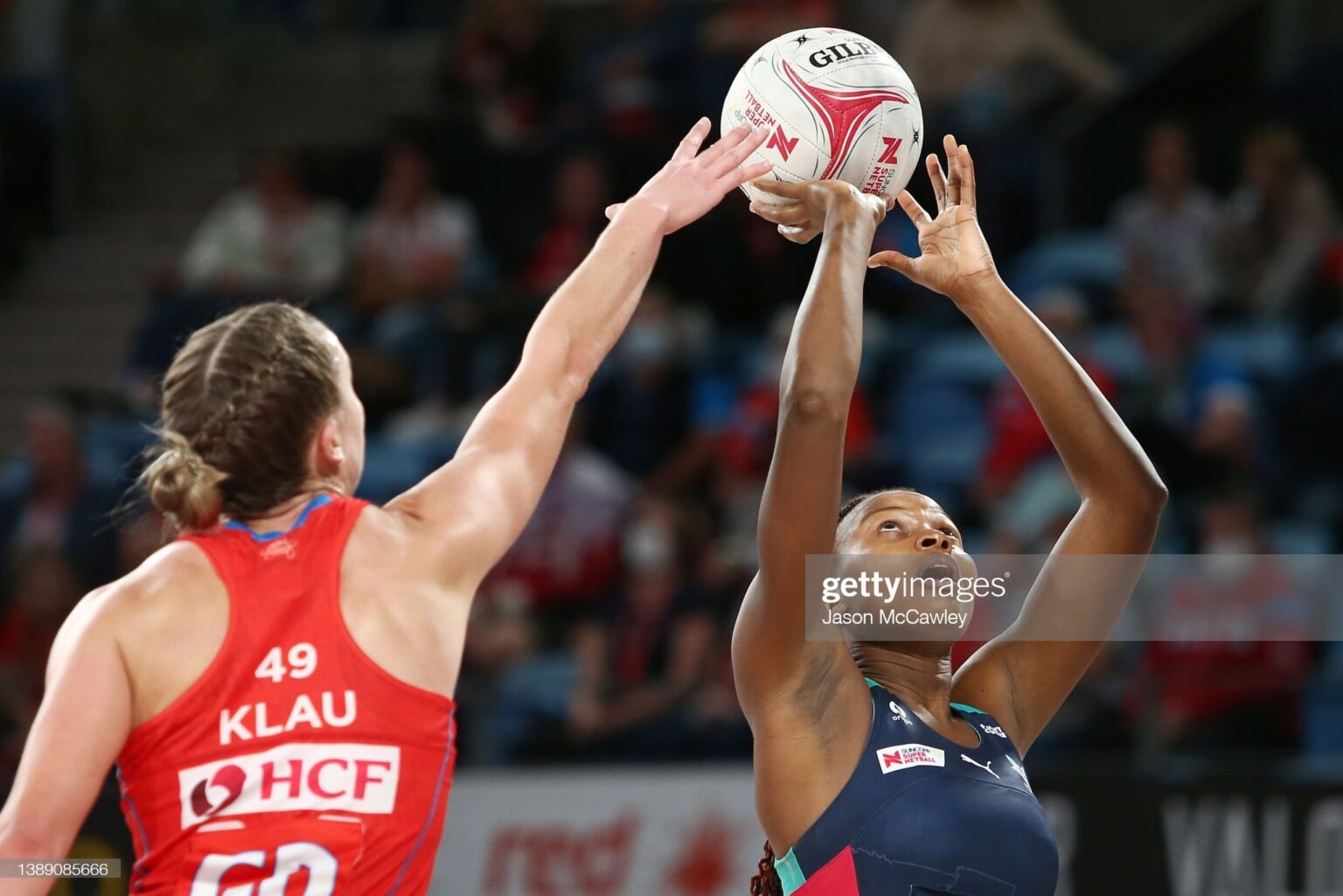 The Melbourne Vixens escaped Sydney with a narrow win over the NSW Swifts as they played their first game without Sam Wallace.

The Melbourne Vixens escaped Sydney with a narrow win over the NSW Swifts as they played their first game without Sam Wallace.

The NSW Swifts were depleted by injuries and COVID-19, but the Melbourne Vixens only just beat the Swifts to win 53-48 in Round Two.

The Swifts were missing Sam Wallace, after the star shooter tore her ACL in Round One. The Swifts were also missing co-captain Paige Hadley, who was ruled out on Friday after testing positive for COVID-19.

Sophie Fawns and Lili Gorman-Brown joined the Swifts playing group for the week, with both youngsters making their debut.

The loss of Wallace also thrust Kelly Singleton into the spotlight, as the recently-elevated training partner adapts to Super Netball level.

The Swifts struggled for fluidity early, unable to find their first option when moving the ball up the court.

The Vixens jumped out to an early lead, as Mwai Kumwenda continued her strong form from last week. Kumwenda finished with 44 goals, and Vixens coach Simone McKinnis was pleased with her performance.

"She’s great, and she was taking some really strong balls and some great shooting out there from MJ," McKinnis said after the game.

So dominant was Kumwenda, that partway through the third quarter, she had more goals than the Swifts had shots.

The Vixens did tense up and let the Swifts back in later on in the game.

"We got a little bit hesitant, and lack of movement out the front that as the game wore on. We’ll have a look at that and things to work on."

McKinnis was pleased to get the win, and for the second time in as many weeks, to bank a win on the road.

McKinnis was also full of praise for her defensive end, who stifled the Swifts early.

"They had a great start, I thought the defensive pressure, particularly down in that defense end and as a unit, there was some great pressure in going hard and contesting ball really well.

"Certainly the defence, like Jo and Emily in that first half. Kate did some great work defensively as well.

"But rapt for the win, not happy that we find ourselves in a position where we’re trying to hang on. You want to find that way to keep pushing it on. That’s something that we’ll look at."

McKinnis was happy with the ability of the Vixens to slow the Swifts' second phase in the first half, as the Swifts were unable to convert their centre passes into attacking opportunities.

"They got a lot of really great ball for us. That has been a focus of ours this past week. I think that even sort of dropped off a little bit in the second half.

"I thought Swifts did a great job in getting themselves in a position to contest, they pushed all the way. It was a tight one really. High pressure in the end."

The Vixens have now equalled their win tally from 2021 when the side struggled.

"We’ve certainly got some balance across that squad. Lizzie [Watson] back makes a big difference. We’re just building some more consistency across that group of Lizzie and Rahni [Samason] and Kippa [Kiera Austin] coming into it.

"We’ve still got a lot of growth to do, particularly across that shooting circle, there’s a lot of development and growth still to come. And Liv adds something extra for us as well, down in that defense end.

"So I think there’s a great balance of strength and depth across the squad and then we’ve just got some areas that we just got to have a gradual build and improvement on."

For the Swifts, the match was the start of the Sam Wallace-less season, as the Trinidad and Tobago shooter recovers. She was on the sideline today, spreading positivity and helping coach the shooters.

The Swifts started with Helen Housby in goal shooter and Kelly Singleton in her natural goal attack position, but the Swifts struggled to move the ball early, as Singleton had just three centre pass receives, and no second phase involvement in the first quarter.

Halfway through the first quarter, Swifts' coach Briony Akle had seen enough and knew a change was needed. Akle brought Sophie Fawns on to make her debut, after Fawns was added to the 10 player squad last week, but didn't get on the court.

"We wanted to give Soph a run. She deserved that, she’s been training really hard, and I think Soph’s extra height really helped us," Akle said.

"Soph’s height and Helen’s height just seemed to work, so she kept the bib."

Akle was proven right quickly, as Fawns was on the board with a goal within 20 seconds of her substitution, and finished with 15 goals.

Fawns provided a strong target for the Swifts midcourters, who were also playing out of their usual formation.

With Hadley's withdrawal, Tayla Fraser started in centre but was moved to wing attack, and Maddy Proud returned to centre in the second half.

"We obviously train with everyone in different positions, so it wasn’t new to us, but I don’t think we were doing a good job second phase and I just thought Maddy going back into that middle and she’s familiar with that, it worked."

The defensive end was not settled either, as Akle through a curveball at the Vixens, starting Diamonds and Swifts goal keeper Sarah Klau in goal defence, and throwing Maddy Turner as the anchor of the court.

"It's unusual to everybody else, but I think she’s definitely got the engine. She’s probably one of the goal keepers, one of the best in the world that can run both positions and she does it really well.

"We knew that she’s a tall presence, she’s a big presence out there and I thought our defensive end did a great job all game.

"You’ve got to look at your key matchups, and we definitely knew that her height and hands over the ball would definitely help, but I think our defenders kept us in that game, and we just didn’t convert when they did get the ball back for us."

Having been comprehensively outplayed at halftime, down by 13 goals, Akle explained after the game that she had encouraged her team to get back to basics in the second half.

"It's just the old cliche about not worrying about the scoreboard, and I think that’s what we were doing, looking up and putting extra pressure on ourselves, and I was like ‘let's just convert our centre passes - we hadn't done that all game.

"It was quite low, and just convert our centre passes and get tough and get in the contest."

In the first half, the Swifts converted 50 per cent of their centre passes to goals, a mark lower than every game last season.

"I think we lacked energy. I thought they certainly needed more voice, and it's a bit hard to hear out there, so having energy, not just from the seven but from others on the bench certainly helps out there."

Akle confirmed after the match that Hadley was experiencing mild symptoms, and was optimistic that the star midcourter will be back and recovered next week.

The Swifts face the Magpies next week, back at Ken Rosewall Arena, while the Vixens will host the Giants.