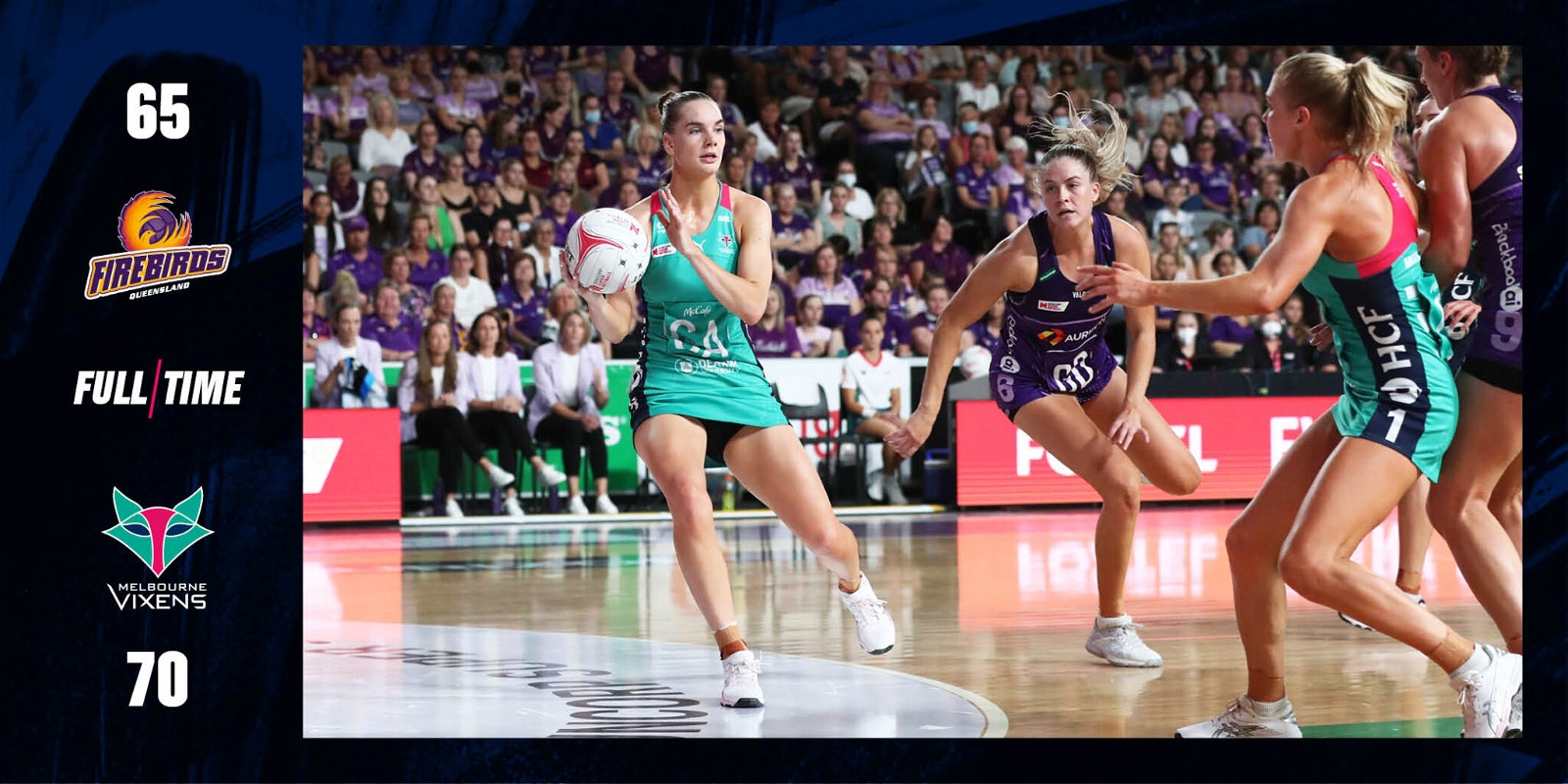 Vixens escape Firebirds in Round One thriller

The Melbourne Vixens walked away with a five goal win over the Queensland Firebirds in a Round One thriller.

Vixens escape Firebirds in Round One thriller

The Melbourne Vixens walked away with a five goal win over the Queensland Firebirds in a Round One thriller.

After their success in the Team Girls Cup, the Vixens were looking to bring their hot streak into Round One of the Suncorp Super Netball season against the Queensland Firebirds.

In the first Sunday game of 2022, the Firebirds and Vixens met at Nissan Arena in Brisbane. The teams played each other twice in 2021, with one win each.

Donnell Wallam made her debut as a permanent member of the Firebirds after Romelda George’s pregnancy announcement. Her presence was clearly appreciated by fans, with the crowd erupting when she made her first shot. Her signing was clearly a good choice for the Firebirds, sinking shot after shot in today’s game.

Coach Megan Anderson was impressed with Wallam's game, saying "I think the connection with Gretel [Bueta] is growing every day."

"The feeders are starting to really find her and find confidence in her in the circle there. A few two-pointers in there as well, so I'm just expecting Donnell to get better and better every game now that she's had that first taste at SSN level."

With the dynamic duo of Liz Watson and Kate Moloney is back, the Vixens attacking end is so dangerous. Watson’s impact was clearly missed in 2021, with her return boosting the team’s gameplay instantly.

Even her leadership on court is beneficial to the team, directing the attacking end with great vision.

Another key player in the Vixen’s attacking end is new recruit Kiera Austin. After being off-court for a season due to injury, Austin was fit to start at goal attack for the Vixen’s first game.

When asked about Austin playing the entirety of the game, Watson said “She is fit and ready to go for the whole game, but we’ll just see what happens.” On court, Austin looked good, giving the Firebirds defence a run for their money.

Gretel Bueta sunk the first Supershot of the game, tying the score 12 -12 with four and half minutes to go in the first quarter. This quickly became a four-point lead, with the Vixens calling their first time out.

Even after a turnover, the Vixens only closed the gap by one point, finishing the first term 15 - 18.

Wallam took a leaf out of Bueta’s book, with a lay-up that the crowd and her teammates loved. The combination of Bueta and Wallam was giving the Vixens defence a small headache, with Emily Mannix replaced by debutant Liv Lewis for the second quarter.

Rahni Samason’s appearance on the court had the Firebirds’ fans recalling her debut against the team last year. In the dying moments of that game, she sunk a game-winning Supershot, something the Vixens would have appreciated in the final minutes of the second quarter. It was Mwai Kumwenda who put the Vixens in a two-goal lead come half-time, with a last-minute Supershot.

The Vixens' shooting circle is going to be a force to be reckoned with this year. Coach Simone McKinnis acknowledged this post-match, saying "We've some really nice flexibility in this shooting circle that we'll keep building on."

Mia Stower replaced Wallam in the Firebirds goal circle, with Supershots looking necessary for the team to close the gap. Whilst the Firebirds were not having much luck with the Supershots, Samson was dominating the space, ending the quarter 57-44, making it a 25 point quarter for the Vixens.

Come the fourth quarter, the Firebirds' defence were creating plenty of opportunities, fighting for every ball. The energy was electric but was quickly interrupted by a Vixens timeout.

The deficit was closed to six points, and things were getting very physical. Players were hitting the deck left, right and centre, with both teams fighting tooth and nail for the win.

Heading into the power five, the Vixens lead was eight points, with Wallam sinking a Supershot, much to the crowd’s delight. Her second attempt wasn’t to be, essentially cancelling out her earlier shot. The Vixens were playing it safe, sticking to the one-point shots. With a minute and 42 seconds left, the Firebirds called a final timeout, behind by six.

Despite the crowd willing them on, the Firebirds ended five goals behind. With plenty of highlights and things to work on, the Firebirds started their season off well despite the loss. Coach Megan Anderson commented "It was a good start and I think that we do what we say we're going to do then it works. We just have to be really committed to putting in that hard work for all sixty minutes."

Mwai Kumwenda was named as MVP, with 44 goals to her name at 89.8 per cent. In the post-match press conference, Coach Simone McKinnis commented "She's just getting better and better each year. She loves it, and she loves the combinations with Kippa [Kiera Austin] and with Rahni out the front."

Round Two will open with the Vixens and 2021 premiers the Swifts at Ken Rosewall Arena. The Firebirds will meet with the Sunshine Coast Lightning in a Queensland duel in the second Saturday game.