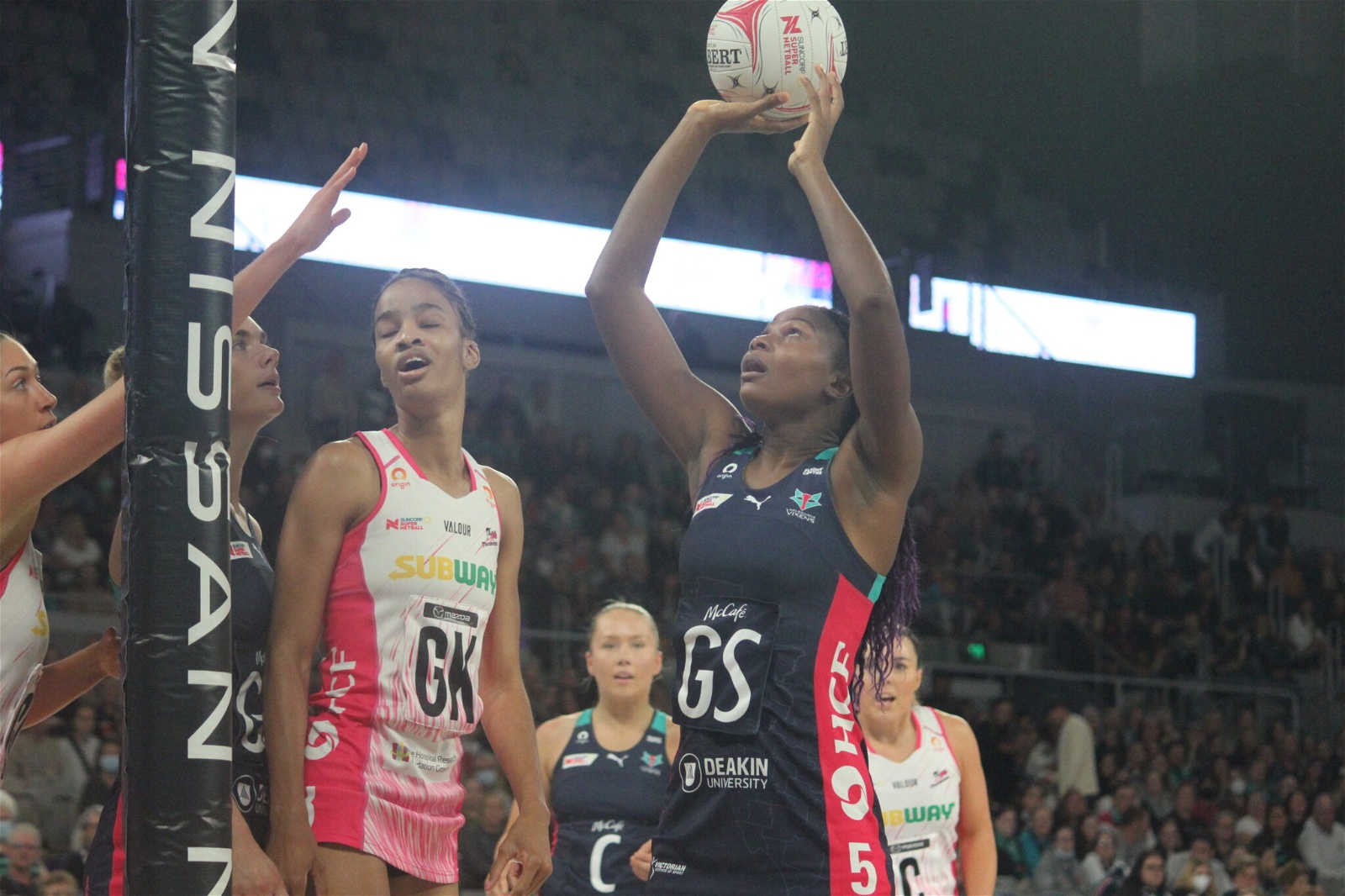 With both teams coming off the back of losses, the Melbourne Vixens came out with the win 53 - 47 against the Adelaide Thunderbirds.

With both teams coming off the back of losses, the Melbourne Vixens came out with the win 53 - 47 against the Adelaide Thunderbirds.

The Melbourne Vixens have bounced back from their shock loss last week to beat the Adelaide Thunderbirds, and continue the Thunderbirds' four-game losing streak.

With one loss to their name, the Vixens were battling the Fever for first place on the ladder. The Thunderbirds, however, had three losses to their name, putting them at risk of dropping below the top four at the end of the round.

Prior to the season’s start, the teams met twice in Traralgon. The Vixens won both, 56 - 53 and 58 - 56, but the Thunderbirds held on for the ride, making the Vixens work for the win.

Both teams were missing key players in today’s match. For the Vixens, Kate Moloney was replaced by Jordan Cransberg, who played for the Vixens in the Traralgon games. Due to a minor knee injury, Lenize Potgieter is out of the Thunderbirds’ ten, covered by training partner Lucy Austin.

It was Lucy Austin who started the Thunderbirds off, followed by a Kiera Austin goal for the Vixens.

Hannah Mundy took Kate Moloney’s place in the starting seven, playing at centre as she so often did in the 2021 season. During the end of her 60 minutes on court, she moved into the wing attack position.

Coach Simone McKinnis commented on Mundy's game, saying, "I thought she did a great job, starting in centre, she's a strong and powerful athlete and she did some great drives, some great feeds."

"I also thought she did a really great job when she went into wing attack and was really quite dynamic in that wing attack role as well."

The Thunderbirds kicked off early, with a three-point lead within the first five minutes. Tippah Dwan and Lucy Austin’s work together had the potential to be dangerous, both with 100 per cent accuracy leading into the final five minutes.

By the Power Five, the Vixens had erased the Thunderbirds' lead. With the two sides neck and neck, it was Dwan who attempted the first super shot, easily rebounded by Austin.

Austin’s presence offered more incentive for the Thunderbirds to attempt super shots, with more height into the ring than Horjus or Potgieter.

After a 12-all quarter, it was the Vixens’ turn to try and pull away. Five minutes in and the Thunderbirds called a timeout, with the Vixens leading by three.

It was here that several positional changes were made, with Georgie Horjus moving to goal attack and Hannah Petty rejoining the game after leaving late in the first quarter.

Despite Austin and Horjus’ shooting success, the Vixens were continuing to rack up the points. There were back-to-back Austin super shots (Lucy and Kiera) much to the crowd’s delight.

Despite the best efforts of both teams’ defensive ends, the Vixens exited the first half with a four-point lead.

At half time, Coach Tania Obst commented on Lucy Austin's addition to the starting seven, saying "She's been pretty good, hasn't she? 100 per cent, you probably can't ask for too much more."

"We just said to Luce just to go out and have a bit of fun and it looks like she's enjoying herself out there."

The Vixens’ defensive end was causing havoc in the third quarter, frequently interrupting the Thunderbirds’ flow. The Thunderbirds powered through, keeping the margin within four.

Moving Dwan into goal shooter, they were now working with a moving circle, drastically different to the first half. Although both Dwan and Horjus can sink super shots, they were now riskier as rebounds were almost guaranteed turnovers.

Moving into the fourth quarter and the Thunderbirds were only down by two, still very much in the game. Unfortunately for them, the Vixens were continuing on with their game plan, quickly adding another two points to their margin.

As the quarter went on, the Vixens continued to dominate, with Mwai Kumwenda successfully sinking four consecutive shots.

In a last-minute attempt, Horjus made her first successful super shot of the night, but it was futile.

Walking away with a five-point lead, the Vixens still remained second on the ladder, with the Thunderbirds dropping to fifth.

Kiera Austin was named player of the match, with 13 goal assists and two super shots.

Edith Hull is a former Victorian netball player, coach and administrator. During the Second World War Hull was also a member of the Australian Women's Land Army.