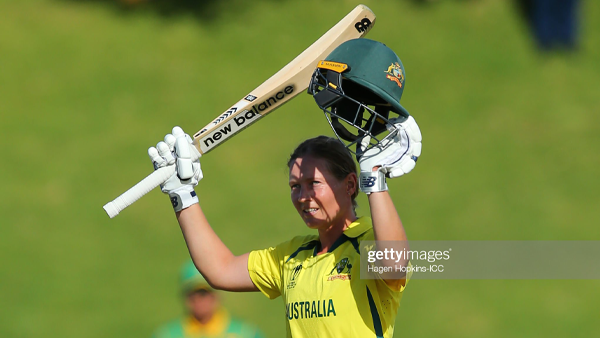 Australia remains the only unbeaten team at the Women's Cricket World Cup as Meg Lanning made a ground-breaking century after South Africa had set a target of 272.

Australia remains the only unbeaten team at the Women's Cricket World Cup as Meg Lanning made a ground-breaking century after South Africa had set a target of 272.

The two remaining undefeated teams in the Women's Cricket World Cup, Australia and South Africa met at Basin Reserve in Wellington, but it was Australia who claimed victory, winning by five wickets off the back of an unbeaten 135* in the run chase.

The Australian captain, Lanning won the toss and elected to send her opponents in to bat, as Australia looked to bowl first for the fourth time this tournament.

However, unlike in previous outings at the World Cup, Australia failed to capitalise with its bowling unit and take early wickets to gain an advantage from the start of the contest. As such, South Africa's opening pair of Lizelle Lee and Laura Wolvaardt batted with intent from the very beginning to contribute to their highest opening partnership of the World Cup so far; 88 runs.

The growing partnership between Lee and Wolvaardt ensured Australia would go without claiming a wicket within the 10-over powerplay for the first time this tournament. Australia used seven bowlers overall, and before the 18-over mark too as the team looked for a breakthrough.

Wolvaardt was the more attacking of two two South African batters, finding gaps and beating fielders as the ball raced towards the boundary, targeting Ellyse Perry's first over - the second over of the day - with a couple of fours, identifying that early intent to score runs and put up a big score.

Alana King entered the mix for the 18th over and created some small chances, the leg-spinner finding the edge of the bat and creating a good line and length, to finally provide Australia with its first wicket of the innings in the 20th over. A tossed-up delivery that hit the pad of Lee (36 from 44) as she missed a flick, looking to go onto the leg side was given out LBW, with the batter opting not to review the decision.

The new batter to the crease for South Africa, Lara Goodall, along with Wolvaardt continued to pedal along, earning a couple of boundaries along the way but it was Australia's inclusion to this match Annabel Sutherland who got the wicket of Goodall (15 from 29), the batter mistiming a hit to mid-off and finding the hands of King who took the catch.

The runs dried up ever so slightly but Wolvaardt was finding opportunities for runs whenever she could as Sune Luus provided some needed support at the other end. The 50-run partnership came up in the 37th over as the pair looked to make a late burst inside the last 12 overs of play.

Luus scored her half-century from 48 balls with a sweep to backward square leg for a single as Wolvaardt (90 from 134) was edging towards a century herself, however, she fell to Ash Gardner's bowling after trying to scurry down the pitch but only finding a top edge to long-on where Tahlia McGrath took the catch.

Mignon du Preez was the next batter to come in and scored a boundary from the third delivery she faced but in that same over, Luus (52 from 51) departed via a Megan Schutt ball that was skied up in the air to a waiting McGrath at deep backward square leg.

Ssettled at the crease, du Preez was looking to take South Africa to the end of its 50 overs but, a stunning catch from Gardner on the rope at deep midwicket where she timed her jump to perfection, got airborne and plucked a one handed catch reaching over her head, du Preez (14 from 13) had to go back to the rooms.

Marizanne Kapp (30* from 21) and Chloe Tryon (17* from nine) saw out the remaining four overs, and scored 43 runs from it, as they looked to push South Africa's score towards 270, with well-timed hits to the boundary, and quick running between the wickets, eventually securing a score of 5/271.

Things didn't start as well as Australia would've liked in its reply, losing Alyssa Healy (five from six) in the third over, edging a full delivery outside off to the wicketkeeper Trisha Chetty off the bowling of Shabnim Ismail to have the team sitting 1/14.

Newcomer to the crease, Lanning survived an early chance when an edge didn't carry to first slip in the same over Healy departed, and took some time to get settled until she had found some boundaries to her name, hitting at least one four between over six and nine.

Australia though was still behind the required run rate, and was still in a little bit of turmoil when Rachael Haynes (17 from 29) was caught at deep mid-wicket via du Preez, taking an airborne two-handed catch, off the bowling of Tryon.

Beth Mooney joined Lanning at the crease and the pair worked to contribute a 70-run partnership, lead largely by the latter, who continued to find the boundary with ease, including launching a six over the boundary at mid-wicket off the bowling of Ayabonga Khaka.

Mooney started to find her groove at the crease, also finding the boundary where possible, as she as Lanning looked for all opportunities to punish any bad South African delivery. Lanning brought up her half-century from 56 balls with a sweep to deep backward square leg for four in an over from Tumi Sekhukhune that conceded 16 runs.

Sekhukhune made up for the expensive over a few balls later when she fielded a Mooney (21 from 23) hit and, looking to run but being sent back by Lanning, a direct hit with one stump to aim at from square leg, the Australian was run out.

With Ellyse Perry still in the rooms, Tahlia McGrath was the next batter in and got off the mark with a single off the first ball she faced, bringing Lanning on strike, who finished the over with back-to-back fours as she looked in control with well-timed shots.

McGrath survived a dropped caught and bowled chance by Luus when she was on six runs but it was again Lanning who continued to be the destroyer with powerful shots that made it to every edge of the ground's boundaries in no time, despite the fielders' best efforts to chase.

Lanning entered the 90s and didn't look to try anything too difficult or out-there with her shot selections, guiding the ball for ones and twos before, on 99, swung at a full toss, hitting a four away to the the deep square fence. The century is her 15th in an ODI, and 10th while chasing a total in an ODI as she took off her helmet, raised her bat and soaked in the atmosphere of cheers and applause.

A chance for another wicket the next ball was squandered when Lee dropped new batter Gardner at slip as the ball took a deflection and raced away to the boundary for four, as Gardner found the boundary again the following delivery to end the over.

Lanning added more runs to her total, finding more boundaries as she too was dropped on 115 by Goodall at deep mid-wicket off the bowling of Sekhukhune, that ball also finding the rope in the end for another four runs. She was again dropped on 123 by Chetty off Kapp's bowling a few overs later too.

Gardner (22 from 26) become the batter who took a more aggressive approach as Australia neared victory, hitting a couple of fours before getting out to Tryon, caught at mid-off by Sekhukune.

Australia needed 29 runs off 60 balls for victory, and looked to play a little conservatively as Sutherland found the rope when required, including a six as Lanning (135* from 130) was dropped once more.

In the end, Sutherland (22* from 23) hit the winning run, a single to fine leg, giving Australia its sixth victory of the Women's Cricket World Cup, and remaining on top of the standings in the preliminary stages of the tournament.

Speaking to the broadcast post-game, Lanning was awarded the Player of the Match and said it was nice to contribute in this game, with form that's carried over from the victory against India, after early games in the tournament where she wasn't scoring as many runs.

"It was nice to contribute. I think we speak a lot about the top four trying to bat through and playing those match-winning innings and it was me today, it'll be someone else another day and it was just nice to be there at the end," she said.

"It's been nice to contribute [in] the last few games, I was pretty disappointed after the New Zealand and West Indies games. I thought I just wasn't quite as clinical as I needed to be so I was really clear in what my plans were coming into these last two games so it's nice for it to come off and hopefully it can continue."

Lanning also referenced the fact that, as wickets fell around her, it became apparent that she needed to be the one to stay at the crease until the very end to help her team to victory.

"It sort of became clear to me that I had to be the batter to bat through once we lost a couple of early wickets" she commented.

"The batters coming in around me sort of took the pressure off. I thought Mooney and McGrath batted extremely well just to sort of keep the scoreboard moving so it was nice to be able to be the batter to bat through.

"I'm in that number three position and that's a crucial position to be able to impact the game so once I'm out there batting, I'm a batter and I'm just trying to get as many runs as I can to help the team win."