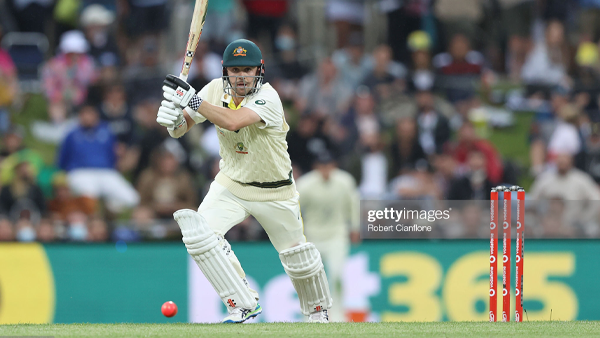 Australian batter Travis Head has credited a stronger desire to prove he belongs in the Test team as a factor that's earned him Player of the Series, as the focus shifts to an away series against Pakistan.

Australian batter Travis Head has credited a stronger desire to prove he belongs in the Test team as a factor that's earned him Player of the Series, as the focus shifts to an away series against Pakistan.

Australian batter Travis Head's recent Ashes series saw him named Player of the Series, crediting being able to work on his game at Shield level helping contribute to his form, which he hopes translates into the subcontinent later in the year too.

Coming into this Ashes series with 19 Test matches and 30 Test innings under his belt, Head averaged 47.27 with the bat, however took his game up a notch across four Test matches against England over this summer period. In all, Head finished the series having scored 357 runs at an average of 59.50, making two centuries and a half-century as he struck the ball well at all times, holding a strike rate of 86.02 from the series.

Axed from Cricket Australia's contract list in April last year following a lowly series against India where he averaged 20.67 in two Tests, Head used this news to identify a hunger in himself to prove he could remain a vital part of the organisation's calculations - a process that seems to have paid dividends.

"I went back and worked on what I needed to work on and continue to try to perform the best way I could for South Australia and then know that the opportunity and the conversations that were had were around that first Test were still [that] they still see me in that position," Head told media about his reaction to the contract announcement.

"Disappointing as it is, the eye was still to the first Test and they still see me having an impact in the Test and making sure I did everything I possibly could to best prepare myself for that. It's nice to be able to repay that and then get the opportunity and play as well as I have."

As well as conversations with Cricket Australia, Head also credits Test captain Pat Cummins, and his state cricketing body and state coach as helping guide him through the stages of his game to better play his way, especially within this series.

"I went through a period of time where I understand that the dismissals might not look the best and I might get caught at third man or flap at the ball and obviously I don't want to do that. My default as a batter technically is if I nicked the ball, I throw my hands through it because it hasn't hit my bat and it's a mistake and I try to sort of catch the moment as such. It doesn't look pretty, I understand that but it's understanding that no dismissal ever looks pretty.

"In Melbourne, I was disappointed in my shot and probably, as I nick it, exaggerate it and make it look a little worse but I'll try and work extremely hard on that. That's giving me the confidence to go out and play and he sort of alluded to that game in a way at Optus Stadium (against New Zealand in 2019), he goes 'Look, if you're taking the game on and you get done at third man a couple of times and you're playing the right way', it's no skin off his nose and he backs me one hundred per cent and that probably gave me the confidence going into this series to be myself and play the situation [as] I've seen it.

"When you look back, in the little moments of conversation that you look back on at the end of the series and go, that might have changed something and I think that definitely, the confidence has given me is the blueprint, obviously going out and performing.

"I'll play strong cricket shots, strong defence, if I'm beaten, I'm beaten, trying to be hard to get out and try to look for scoring opportunities and that presents itself and if that's the situation that's needed, it's needed. I'm really pleased with the way I was able to combat every situation, take all the information in it and try to best execute that."

Someone who believes in every Test match being an opportunity to learn and improve, the 28-year-old says the chance to continue to play the format, and be trusted by his peers whether at state or national level has him confident it can lead to greater amounts of consistency.

"I think every time you play Test cricket, it's another learning opportunity. It sounds cliché but I think over 19 Test matches going into this series, I continue to learn each time and in moments it wasn't great, in moments I didn't take my opportunity, that happens, that's the game of cricket," Head said.

"It's the same as South Australia, over a long period of time I've been able to slowly develop and get better and continue and I feel like I'm a really consistent, strong Shield player.

"It's going to be tough, there's definitely going to be times where that's gonna be extremely difficult, the pressure's gonna be on and it's a high spotlight. I'm gonna make sure I've treated myself [well] and continue to work on those things and just be as consistent as I possibly can."

Looking ahead to the Test team's next challenge, an away series against Pakistan that begins on March 3, the left-hander is hoping he can replicate his form at home, in another country's conditions. Head, who made his Test debut in Pakistan - and made a duck in his first innings -, has only played two Test series away from Australia - the other being England in 2019 - prompting a real challenge ahead.

"I'll look at what the expected conditions may look like over the next couple of weeks and know what I have to do more mindset-wise to prepare for that," Head said.

"I'm hearing that the conditions in Pakistan can obviously be challenging, they've got a lot of fast bowlers, whether it's green and seaming around or spin-friendly I guess we'll wait and see what the conditions we'll get temperature-wise.

"When I've heard different people say different things, no one's travelled there for a long time so like any tour, same in Sri Lanka, I think you look at ways you may be able to counteract Australia[n conditions] we know so well and that planning probably didn't go as hard or as in-depth because I've been playing in Australia and playing Shield cricket.

"I've got so many resources at my peril, it's amazing to have so I'll dive into every one of those minds and continue to work on my game."