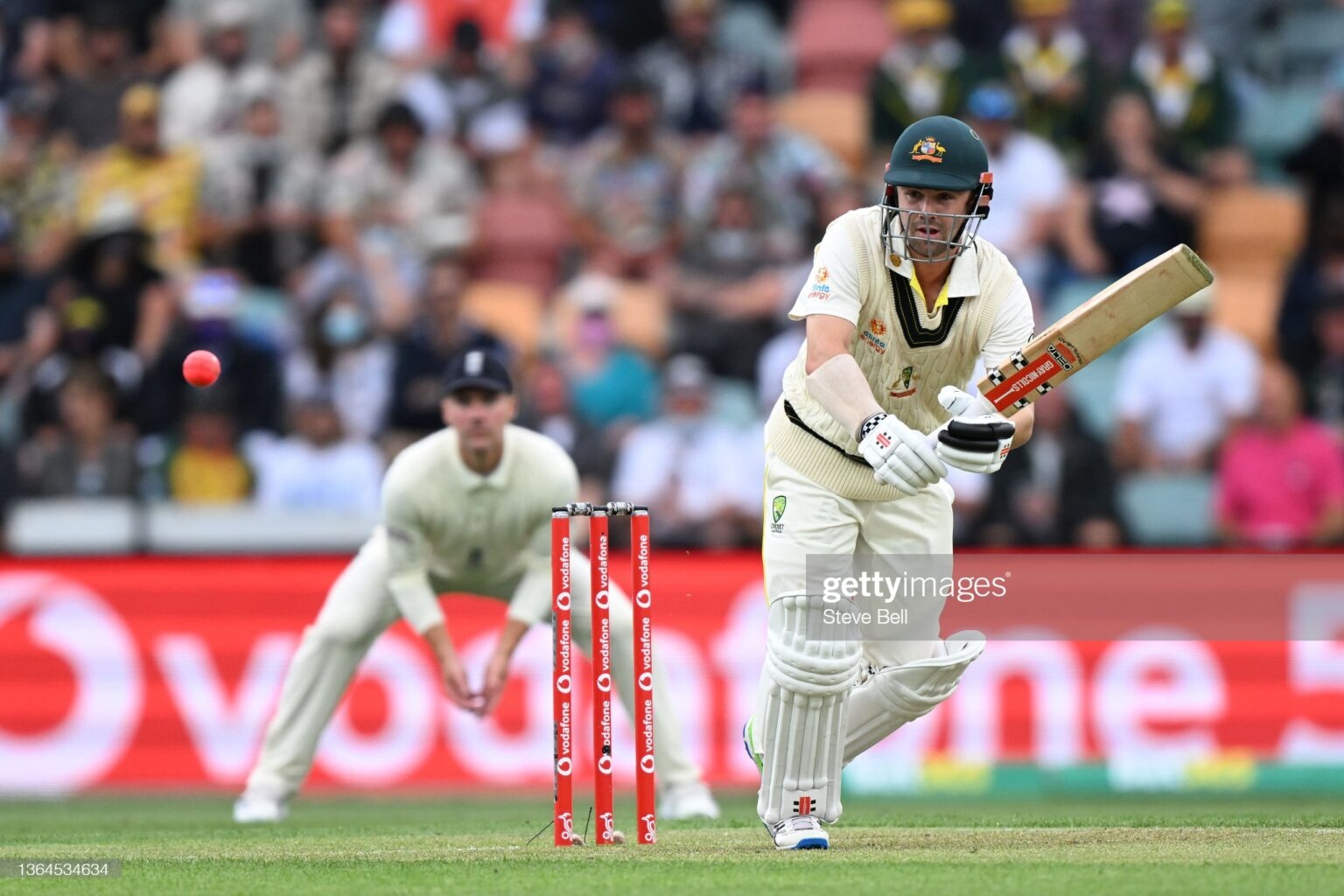 Travis Head scored a century as the Australians fought back from a tough start on Day One of the fifth Ashes Test in Hobart.

Travis Head scored a century as the Australians fought back from a tough start on Day One of the fifth Ashes Test in Hobart.

Cloudy skies and a very green pitch, combined with the pink ball for the day-night test, made the choice clear for England, as it won the toss and sent Australia in to bat to start the fifth Ashes Test in Hobart.

England started well, with David Warner the first Australian batsman to depart for the fifth innings in a row. He fended at a ball outside the off-stump to Ollie Robinson and was caught in the slips.

Fellow opener Usman Khawaja befell a similar fate, nicking off against Stuart Broad. Steve Smith's lean run of form also continued, as he was squared up by Robinson as well. It is the first time in 244 international innings that Smith and Warner have both batted, and both been dismissed for ducks.

On 3/12, the English team were in a position of dominance for the first time all series, as Robinson found seam off the pitch, before Travis Head entered, joining with Marnus Labuschagne.

English bowling coach Jon Lewis considered that to be the high point of the day for the tourists.

When Head arrived at the crease, he and Labuschagne set about changing the momentum, as they batted aggressively.

It appeared that Australia had rescued the session at 3/83, with just a few minutes left before the dinner break, when Labuschagne slipped over and was clean bowled by a Stuart Broad yorker for 44.

Labuschagne had scored 36 of his 44 runs from boundaries and scored at a strike rate of 83, as he tried to put the pressure back on the English bowlers.

After the break, Green came out with Head, and the two continued to wreak havoc on the English attack, as the bowlers faltered.

Head went on to make 101 in his return from Covid-19, before being dismissed, and Green again passed 50, before he was eventually dismissed for 74. By the time Green fell, Australia had climbed to 6/236.

After losing the first three wickets for so few, Australia had wrestled back into the match.

Lewis credited the Australian batters for their fightback, giving full credit to Green and Head.

"I think they also counterpunched fantastically well, with Marnus and Travis Head, you've got to give them credit for being quite smart players and playing a couple of very smart innings in the situation that they were in.

"I thought the middle session, in particular, we were a little bit slow to adapt to what was happening in front of us, and we could have been better," he said.

The loss of seamer Ollie Robinson didn't help the English case either. Robinson bowled seven overs in the early session and came back to bowl a single over after the break. He was visibly slower and reaching for his back.

Lewis explained that it was a back spasm, but also suggested that fitness may be an issue for the young seamer.

"I thought he was doing fantastically well. It would have been nice to see him continue and see him pick up a couple of wickets as well.

"He's got a back spasm... and those things can come and go. We're hoping with treatment overnight, he can come back tomorrow.

"It's definitely something to work on. Something he needs to improve... He's got to get used to understanding what it takes to be a full time, year-round international cricketer. And playing extra days as well, with the Test last week, and also in this series with the matches squashed together.

"It's one of the things that he really needs to work on. He's shown that over the course of the English summer and this series so far, that he can put back to back games together," Lewis said.

Head spoke after the day's play and was optimistic that the Aussies could convert from a strong position, to post a big first-innings total.

"I think I'm disappointed that I wasn't able to go and get a big score," he explained.

"I felt like I had earned the right and then worked really hard to get to that position and to give it up that easily, I'm pretty disappointed."

"Hopefully we put them [England] under high pressure and it turns into... I guess that first innings puts us in a position to win the game of cricket for Australia, and then sit back and reflect on that."

Head suggested that a score of 300 for the first innings would put Australia in a good position, given the conditions.

"I think anything over 300 is going to be a great start.

"I think you look at traditionally in Australia, that 400+ score. This wicket is probably more suited than the conditions, pink ball, we probably look at it more like it's bowler-friendly... so anything over 300, and batting as long as we possibly can tomorrow is going to be key."

The Australians will resume at 6/241 tomorrow, after facing just under 60 overs today. Play is scheduled to resume at 2:30 pm AEDT weather permitting.