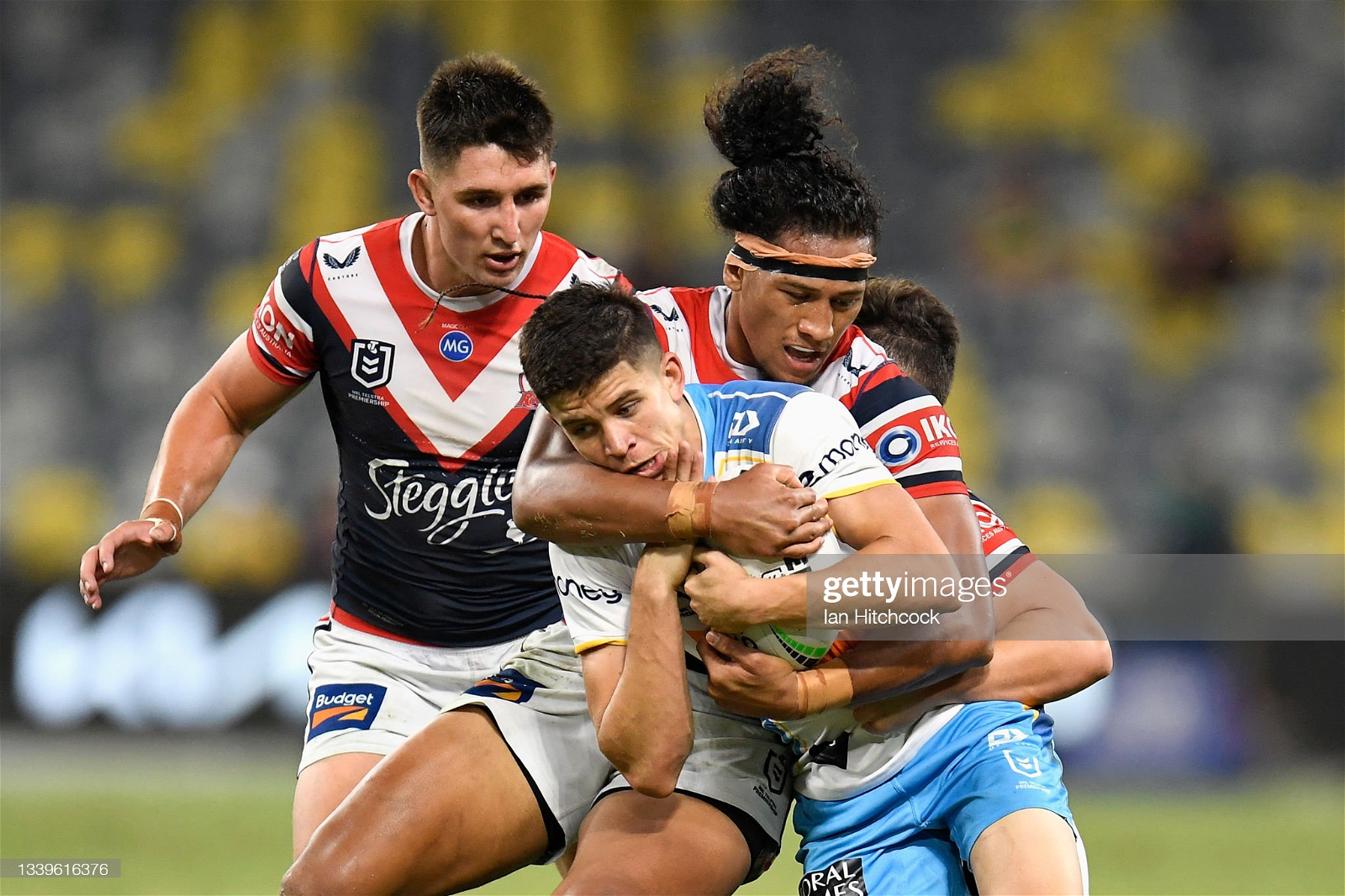 The top five NRL week one finals of the 21st century

With the 2022 finals extremely close, it's time to take a look back at some of the best first-week NRL finals of the past.

The top five NRL week one finals of the 21st century

With the 2022 finals extremely close, it's time to take a look back at some of the best first-week NRL finals of the past.

The Storm came into this match as heavy favourites being the reigning premiers. At the same time, the Rabbitohs, with a strong lineup including Greg Inglis and Adam Reynolds, would have been confident of their ability to compete.

The Rabbitohs got off to a quick start with Dane Gagai getting over the line in the first 10 minutes before the Storm scored the next two tries. With less than five minutes to go in the first half, both teams got over for tries, with the Storm taking a slight advantage into the break.

The Rabbitohs were disappointed with their inability to convert any of their two tries in the first half, with Adam Reynolds not having an excellent kicking day. While he couldn't convert, two penalty goals kept the Rabbitohs in the game.

The tackling was ferocious in the second half, with both sides giving as much as they could in front of more than 17,000 at AAMI Park. When Cameron Murray scored in the 70th minute, with the subsequent conversion by Adam Reynolds made, the game looked over with the Bunnies up by six points.

South Sydney's defence couldn't hold on, though, with Cheyse Blair getting the ball right after the restart, getting past the defence and scoring one of the great tries for Melbourne. Cameron Smith converted the try to have the score level with four minutes to go.

Cameron Munster was the man to make a difference when he set up a line break for Billy Slater, with Munster then standing up and clinching the match with a field goal. The Channel Nine commentators described the win as one of the best they had ever seen.

The battle for Queensland was one of the greatest finals in recent memory for one key reason; a massive comeback by the Titans. In the end, though, that comeback was in vain, with the Broncos holding on in the second half to take the win.

The match was very light in defence through the first half, with both teams getting over the line multiple times, leaving the score at 28-10 in the Broncos favour at the break. Israel Foloau was the leading man for the Broncos scoring three tries, with no other Broncos player scoring more than once.

Corey Parker was also extremely important, kicking 6/8 through the match, while the Titans' Scott Prince went only 4/6. The Broncos tried to put the match beyond doubt with a penalty goal after the break, but the Titans weren't done yet. Kevin Gordon got a 90-metre intercept try to kick the Titans back into action.

While Prince and Gordon managed to rally the troops late, it was just too late. They didn't have enough of a platform in the first half to get back in the lead or really even threaten. For a minute, though, it looked as if all the momentum was with the Titans, and the comeback was on. It wasn't to be, though, with the Broncos running home 40-32 winners.

It's certainly not your traditional classic match, a tight tussle with one team getting over the top in the final minutes. In this one, the Tigers were on top from the very start and continued through the finals series, eventually beating the Cowboys again in the Grand Final, taking their first premiership.

The Tigers received a pep talk from Noel Kelly before the game began, and it worked with the Tigers running onto the ground, pumped in front of the 27,000 fans. Brett Hodgson must have been particularly inspired by the pre-game speech, with him hauling in 30 points.

Hodgson scored three of the team's eight tries as well as a club record at the time of nine goals, it was enough to make him the highest point scorer for a fullback in an NRL season - a record previously held by Darren Lockyer. His try at the 29th minute came from some magical footwork and was simply impossible to describe.

Matt Sing scored the Cowboys' only try just before the halftime break. From there, though, it was all Tigers. Trys came consistently with the Tigers refusing to take the foot off the accelerator at any point, eventually getting over the top by 44 points and going on to win the Grand Final a few weeks later.

The Roosters came into this match as heavy favourites, but that didn't matter in the end, with the Panthers putting on one of the best final-minute wins of all time. The match was tight throughout the entire night, but the Panthers put together one of the greatest final five minutes to send themselves into the third week of finals.

The first forty minutes of play weren't exciting or even appealing to watch. It was a sloppy affair with plenty of errors. It seemed as if the occasion of a final was getting to both teams. The Roosters managed one try and a conversion compared to the Panthers' one try in the first half with the Roosters taking just a 6-4 lead into the second half.

However, it didn't take long after the break for the Roosters to get things going again. Shaun Kenney-Dowall got past the defence and ran down the right side of the field to push the lead to eight points after the conversion was made. The Panthers came back quickly before the Roosters yet again pushed the lead out to six points with about 10 minutes to go, thanks to a solo effort from Mitchell Pearce.

With only minutes left on the clock, it was clear that the Panthers would have to rise, and indeed they did. With six minutes to go, Dallin Watene-Zelezniak put together a freakish effort on the last tackle to give the Panthers six more. Dean Whare didn't need those six as he got over the line easily, with Soward tying the match up at 18-all, with only two minutes to go.

Enter Soward again, who, with less than 10 seconds to go in the match, got onto a dropkick from about 35 metres out to clear the posts and give the Panthers the single-point victory they were after. The Panthers had pulled off a miracle, one of the best NRL wins of all time.

The 2020 and 2021 seasons brought some of the oddest and most interesting games in modern NRL history, and that was no difference in the finals. In front of 15,000 people at neither team's home ground, the Roosters and Titans put together one of the best finals in modern memory.

The Roosters looked good early, getting over for two tries and a conversion before the Titans even woke up. Sydney took a 12-6 lead into half-time after Beau Fermor scored late in the first half for Gold Coast to give the side a small amount of hope.

The Roosters must have enjoyed their half-time oranges because Daniel Tupou was over the try line in the 41st minute before Adam Keighran ensured they would get the full six points for their efforts. From there, though, there was a little bit of a run-on by the Titans to equal the game up eventually.

Tino Fa'asuamaleaui and Brian Kelly scored twice in ten minutes to equal things up before Josh Morris replied for the Roosters in the 60th minute. With a four-point lead, the Roosters needed to hold on for as long as possible and add extra power into their defence.

That strategy worked for a small amount of time but eventually, Jarrod Wallace was good enough to get past the defence, scoring in the 69th minute with Jamal Fogarty kicking his third conversion of the day.

The final ten minutes were all hustle and bustle, with the ball finding itself down both ends of the field multiple times. The Roosters had some luck when Sam Walker kicked a perfect field goal in the 77th minute to secure the lead. Some more luck came when Patrick Herbert could not connect with Corey Thompson, which could have seen the Titans score late to take the match. In the end, though, the Roosters were the better team running home one-point winners.