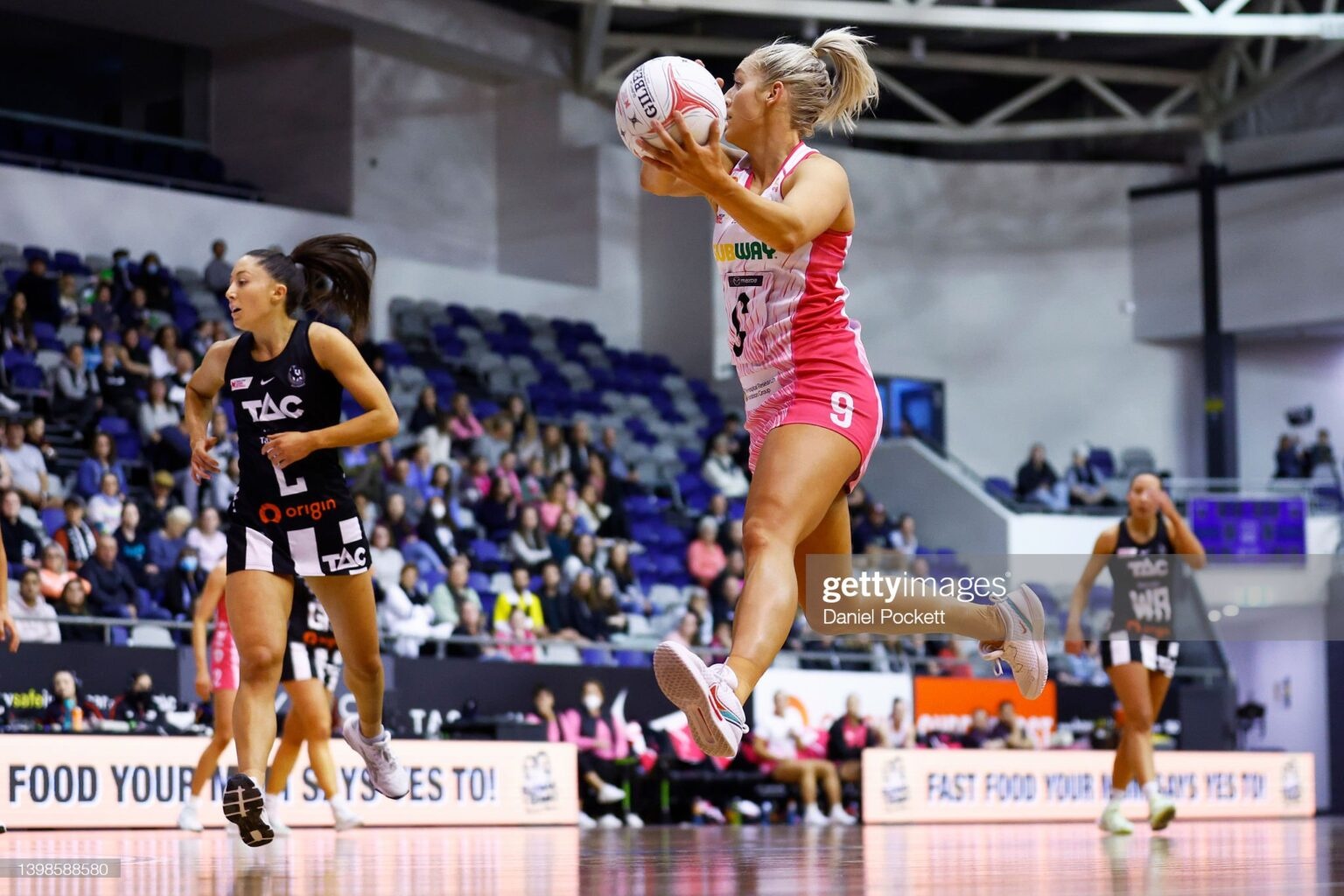 The Adelaide Thunderbirds have beaten a flue outbreak to beat the Collingwood Magpies by five goals and vault into third on the Super Netball ladder.

The Adelaide Thunderbirds have beaten a flue outbreak to beat the Collingwood Magpies by five goals and vault into third on the Super Netball ladder.

The Adelaide Thunderbirds have defeated the Collingwood Magpies for the second time in the 2022 Super Netball season to move into third on the ladder, with just three rounds to play.

The Thunderbirds were thrown into chaos before the game, as starters Lenize Potgieter, Maisie Nankivell and captain Hannah Petty were all ruled out due to illness. Nankivell recovered from COVID-19 a week earlier, but the trio were all struck down with illness.

The Thunderbirds jumped out to an early lead, as Lucy Austin scored five of the first goals as she stepped in to replace Potgieter. At the other end, Shamera Sterling and Matilda Garrett wreaked havoc on the Magpies, with three gains in the first quarter.

The pain was worse in the second, as the Thunderbirds scored 13 of the first 17 goals of the quarter, blowing the margin out to ten goals before Gabby Sinclair started to bring the Magpies into the match, with back to back super shots.

It wasn't enough to restore the margin, as a late run by the visitors gave them a 12 goal lead at half time.

Tayla Williams was the chief destroyer in the first half, with seven goal assists, and two gains, as she found a way to dull Molly Jovic's influence at the same time as she had her own influence on the match.

Magpies coach Nicole Richardson was not afraid to try and change things in the third quarter to bring the Magpies into the match. Maggie Lind and Jacqui Newton were introduced into the match to try and quell the Thunderbirds.

It wasn't enough, as Sterling, Garrett and Latanya Wilson continued to wreak havoc. The trio combined for five gains and two more pickups in the quarter, as the Thunderbirds stretched the margin to 11 late in the quarter.

At that point, Lucy Austin had more goals than the Magpies, a sign of how strong the Thunderbirds were as a team.

Richardson implored her team to continue to fight, to try and find some fight, and get back into the contest. It was a slow burn, but eventually, Gabby Sinclair led a minifightback, as she and Sophie Garbin piled on five super shots to bring the margin back by six at the end of the match.

When it was all said and done, the Magpies were down by five, 58-53, and the Thunderbirds had pushed themselves into third on the ladder.

Tayla Williams had four gains for the match and 13 goal assists, while the defensive trio of Wilson, Garrett and Sterling combined for 15 gains and 14 deflections in a comprehensive performance.

After the game, Nicole Richardson was disappointed with the result, but glad that her team found a fight late in the match.

"It was pleasing to see the response in the end," Richardson said.

"In such a tight season, it's really important that even though the game got away from us, we finished off strongly and tried to minimise the loss to as low as we could.

"Depending on whether it's going to come down to percentage. Happy with how they responded, but obviously very disappointed that we were in the position to start with."

Richardson was quickly onto the cause of the Magpies problem against the Thunderbirds, and explained how her charges had struggled.

"I just think our decision making with ball in hand hurt us today. I’ve been super impressed with where the team has been at the last six weeks. Our turnovers have been under 20 for six weeks, and today we notched up 34, so there’s the difference straight away.

"Anytime you come up against a team like the Thunderbirds, Sterling had a good game, and Garrett and Wilson, they’re quite a good back end, which you can see every time they play it always the lowest score of the round, there's a lot of turnovers.

Richardson also thought that Lucy Austin had been influential, as a last-minute inclusion, who provides a big point of difference from Lenize Potgieter.

"Lucy Austin really stood up under the post, and we didn’t really have an answer to her today. She’s a tall, strong body under the post who holds well, and holds very differently to Lenize, so that caused us some problems.

"We still created enough turnovers and plenty of ball, we had 28 (turnovers) ourselves, so we just weren’t able to value possession today, which was uncharacteristic of how we have been playing the last six weeks."

One of the changes that Richardson made throughout the match was to shift Gabby Sinclair into goal shooter, in place of Shimona Nelson late in the match.

"With where we were, we felt that we were struggling with our second phase connection, so by having Gabby in the goal shooter, we were hoping to have her out on the extension and possibly draw Sterling out of the ring as well, and then just that mismatch and getting her out, and trying to get Sophie to post up on Tilly [Garrett], that was our aim there.

"Obviously towards the end there, needing to make sure we had more of a moving circle. We really needed to be accountable on the two point shot, and I thought Sophie and Gabby did that well in the last quarter."

Despite the loss, Richardson was upbeat about the Magpies' chances to make finals. The Magpies find themselves one win and percentage (approximately 25 goals' worth) outside of finals.

With three matches against potential finals contenders, every match will be tough, and worth "double" because of the opposition.

"It's going to be a massive finish to the season. We’re coming up against three teams, Vixens have probably well and truly cemented their spot there, but thats still going to be a must-win game for us.

"We’re going to go up against the Swifts and Lightning who are in the same position as us, who are also thinking that their season is still alive and going to challenge. Where we sit now, very disappointed, but we’re still a game outside third position, so its tight, destiny is in our own hands.

"We’ve got to make sure we do our job in the last three rounds, and if we need some results to go our way later, hopefully they fall our way. But at the moment it's controlling what we can control, and thats our next three matches and the performance we put out."

The win vaults the Thunderbirds into third place, just two weeks after their season appeared to be written off, after three wins in their past four matches, including two in five days this week.

Those wins, all against contenders, have come without a full strength side, and have given Tayla Williams more court time. The 21 year old has been a revalation in recent weeks, showing uncanny ability to read the play and disrupt opposing attacking play.