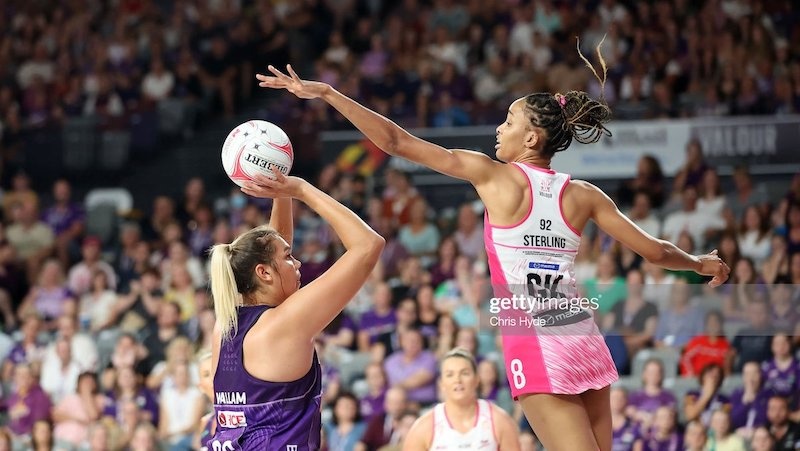 Closing out Round Five, the contest was competitive and exciting, and a surge from the Thunderbirds in the third quarter made it an enthralling fourth quarter.

However, the Firebirds found another gear, while the Thunderbirds made crucial errors that saw the lead blow out again to a final margin of 10.

Speaking post-game, Firebirds' coach Megan Anderson was pleased with her side's ability to run out the win, especially off the back of a big three-game week.

"I think we've shown ourselves, most importantly, that we can match it with any of the teams in the competition. Couple of wonky results over the week, so it just goes to show that anybody can beat anybody on their day, so learning to win ugly like that is really important.

"Knowing that when it is a grind and when things aren't exactly going our way, we can still knuckle down and get the job done, so that was probably one of the most pleasing things from tonight.

"It's not been our strength over the past 12 months or so, so that's something that's really improved from us."

Queensland went on a 6-1 run start, taking the early lead in the first quarter and causing major headaches for Adelaide coach Tania Obst, who had started with the strong defensive combination that finished off Wednesday's game against the Swifts and her regular attack end structure.

The Thunderbirds managed to bring it back, before Gretel Bueta and Donnell Wallam went on a run to end the quarter 17-11.

In the second, it was much the same. The Firebirds got the first two goals and then the teams went one-for-one until a couple of super shots in the Power Five.

At half-time, the margin was nine and the Thunderbirds had plenty to talk about in the break.

Going goal-for-goal once again for the better part of the third quarter, the Dwan-Horjus combination took over the Power Five period and made it count. The 10 goal margin was reduced to three before a time-out had to be called by the Firebirds to reset.

The short, moving goal circle was able to shrug the defence, forcing Ruby Bakewell Doran and Eboni Usuro-Brown to body-up and find their places physically, given the height difference.

With 15 minutes remaining, the margin was two, setting up a tantalising final quarter of play in Brisbane.

The Thunderbirds fell apart a little when the match was in the balance, the Firebirds pulling out to a 10 goal win.

Asked after the match at how her plans for the team were now taking shape, a season and a bit into her tenure, Anderson said she is playing to their strengths and the fast-style is paying off more than ever before. The bonus is that the mums - Bueta and Kim Ravaillion - are fitter and strong after returning from maternity leave last season, and the team as a whole is too; meaning less fatigue-related errors and the best players able to run out a full game.

"I think as a coach, you look at the players that are in your team, and last year I inherited the team, so knowing what they can do and what's their strengths, and then you work the game plan around that.

"Obviously we have lots of really fast athletes in our team, so trying to make the most of that but also instil a bit of game awareness in those players, so they know when to slow it down and when to speed it up and I think that's something that's definitely improved this year, as opposed to last year."

The Adelaide Thunderbirds were once again forced to make multiple changes, using nine players from the squad. One of them improved things dramatically - the Dwan/Horjus combination in the third quarter - but otherwise, the increased rotation added to the challenges for the Thunderbirds.

Using the bench is going to become more crucial as the season wears on and fatigue hits teams. There is still another three-game week to come in a months time, rounds nine, 10 and 11.

Anderson was pleased with how her group were able to manage the load this week, and she'll continue to make changes based on match-ups and throughout the season.

"We used all of our 10 players on Tuesday, which probably helped us today.

"There's definitely some fatigue out there, in the last quarter, but you know the fact that they ran out those three games pretty convincingly, you know, we didn't quite get there against the Fever, but to start a three-game week against the Fever and then finish with two wins was pretty impressive."

The teams now get a week break, before Super Netball returns next Saturday and Sunday.

The Firebirds remain at home for the next fortnight, starting with a Round Six clash with the Magpies, while the Thunderbirds will travel to Melbourne to face the Vixens next Saturday night.