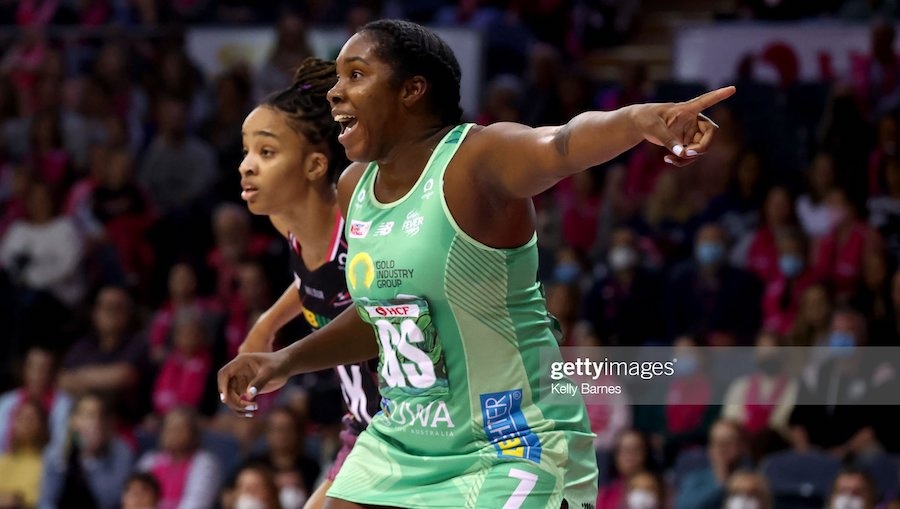 After a fairly even start to the contest, the Fever worked their way on top before hitting the lead and never looking back. The Thunderbirds challenged throughout the game, and were around the mark, but couldn't string together enough competitive play for a win.

Speaking after the game, Dan Ryan was pleased with the hit-out and especially happy with the contributions of Emma Cosh and Verity Simmons, who started in the seven following strong performances at training.

"I felt like we had momentum for most parts of the game, and there were a couple of times where we just sort of lost a bit of focus and got a bit loose defensively that opened the door to Thunderbirds to come back in and challenge us a little bit.

"But we'll look at those moments and know that we're still looking to put that complete 60 minute, four quarter game together. But pretty happy to come away with the win and particularly the week we had in terms of not having the full squad on the court.

"I thought the girls that were in the training environment, especially Emma Cosh, were outstanding for us today in that first 30 minutes and just a really important game for Jess (Anstiss) and Sasha (Glasgow) to get back on court and have that COVID blow-out, that post COVID game."

After a fifth consecutive loss, Thunderbirds' coach Tania Obst remains upbeat and finds the little wins for her young team, among the disappointment.

"I think to keep the Fever to 60 goals is a might effort, seeing as though they generally score over 75 most games, so I think that our defensive game is holding up.

"We actually probably had one of our highest scoring games as well, we are sort of struggling to get over 50 a the moment, but we certainly, in attack, we played to our game plan. We had a few little errors, with some ball handling and some of that, which probably was the difference in the end."

Sasha Glasgow and Jess Anstiss returned from health and safety protocols, released from quarantine on Saturday morning, but neither started on court. Instead, Cosh started the game at goal attack for the Fever, while Stacey Francis-Bayman was in wing defence.

Ryan commented post-match that "continuity" from the training environment to game is important for the Fever, and that was at the forefront of their minds when selecting the starting seven on Saturday.

Immediately, the confidence of Cosh was on show, her turn and shoot mentality maintained for much of the first 15 minutes.

The impact of Shamera Sterling on that goal circle was becoming more influential, as the Fever were forced to go around Sterling to Fowler, with high feeds in tipped and followed up by their speed.

Some errors and miscommunication slipped into the Thunderbirds' game and the Fever pounced with three in a row.

Down by five, Sterling picked up an intercept and the Thunderbirds were able to make it count. One more centre pass converted, and they were only three goals down at quarter time.

The Fever lost a little flow at the start of the second quarter, with Cosh looking to pass off and the Thunderbirds' all-arms defence getting in-between.

Very quickly, though, the Fever pulled back out to a seven-goal advantage and the switch of Tippah Dwan into goal shooter for Lenize Potgieter was made.

Things flowed more freely for the Fever in the second quarter, the connection made for stronger transition and they cramped the Thunderbirds attacking play, forcing the home side back to the defensive third on multiple occasions.

The home crowd was kept interested with two super shots to Dwan, and one to Horjus, making for a nine point game at the long break, 25-34.

After half-time, the changes came for the Fever and Thunderbirds, with Glasgow entering at goal attack and Anstiss at centre, while Potgieter was back at goal shooter for the home team.

Further pain was inflicted on the Thunderbirds, with their errors punished by the accuracy of Fowler and Glasgow, especially on the super shot. Courtney Bruce andSunday Aryangwere all over the Thunderbirds' goal circle, whether it was the holding or moving combination.

At three quarter time, the margin had pushed out to 13.

After entering play in the closing minutes of the third, Tayla Williams had an impact in the Thunderbirds' midcourt from the first centre pass. Her read of the ball influential in drawing the margin back in to single digits.

Sterling had a brilliant game against player of the match Fowler, picking up five intercepts and six deflections. The pressure of the Thunderbirds defence combination, with Matilda Garret, Hannah Petty and later in the quarter Wilson, forced the Fever goalers into four general play turnovers.

The goal circle featuring three Sunshine Girls drew everyone in, and had the fans at Netball SA Stadium, and those watching from home, enthralled.

However, the home sides' late super shot attempts were not enough to take a win in Adelaide, the Fever's stretch over the shot creating too big of a challenge for Dwan and Horjus.

A nine goal margin in the end added a fifth loss in a row for the Thunderbirds.

Speaking after the game, Obst said it's tough taking five losses on the trot, but the girls keep turning up and are challenging teams for much of the 60 minute game.

"We've had two really tough weeks on the track and their commitment to keep coming up, week in, week out and to try and put out there has been really commendable.

"I thought their effort is certainly there, and their attitude to put out what we want them to put out.

"The thing I was really proud of is, we had a very different type of game plan against the Fever defence and I thought we stuck to it really, really well. Apart from maybe a couple of little connection errors and some ball handling errors, but we're really close..."

Another loss is another opportunity for learning, and Adelaide will certainly continue to learn from these games.

Two weeks ago the Thunderbirds were close against the Firebirds and then were unable to take the game on in the critical moments, against the Fever Obst thought that had improved.

"It's probably the 'moments' in games, and I thought we probably played the moments better tonight than we did last week and certainly what we did in the second half against the Firebirds, so we're recognising the moments a little bit better.

"They get a bit of a run on and you get a bit of a rush of blood and there's an error, but they are actually learning around crafting out the quarters, rather than just gung-ho for 15 minutes.

"How we craft out a win, how we grind it out. How we play our fast ball then when do we put it in and maintain possession and play a safer game - that's the next hurdle for us.

"And it's there in pieces, it's now doing it more consistently."

While the stellar Australian Diamonds' defence in Bruce and Aryang pushed the Thunderbirds' goal circle to their limits, the role of Francis-Bayman at wing defence stopped the flow of the Thunderbirds' transition before it even entered the circle.

Competing with Elle McDonald for the night, the Roses' defender was more than competitive, she was all over McDonald with hands, covering the circle edge with her height and long reach, and forced the Thunderbirds into errors.

Ryan was impressed with the full 60 minute effort from Francis-Bayman, noting her commitment to playing her "intense" role for the entire night.

"I thought that was one of the best games I've seen her play, particularly this season.

"She was relentless and intense from the very first whistle to the last, and I think she was causing a lot of errors and getting her hands to ball more so than what she has done in previous games and also quite steady and reliable in attack.

"So, I thought she played a pretty complete game for us there."

Ryan is pleased with where his side is at after seven rounds of netball, but looking forward to seeing what they can produce in the second half of the season with a lighter travel schedule.

"Coming to the half-way point in the competition now, we need to be really content that we've got five wins in the bag, and two losses where we were nowhere near our best in those games for a number of different circumstances and reason, and we've had a hectic travel schedule in the first half of the season and I think we've got through it really well.

"So it places us really well for the second half, to have a few more home games and a bit more recovery time and a bit more continuity in the environment."

The Adelaide Thunderbirds now travel to the Sunshine Coast where they'll take on the Lightning on Saturday night, while the West Coast Fever return home to host the Collingwood Magpies next Sunday.