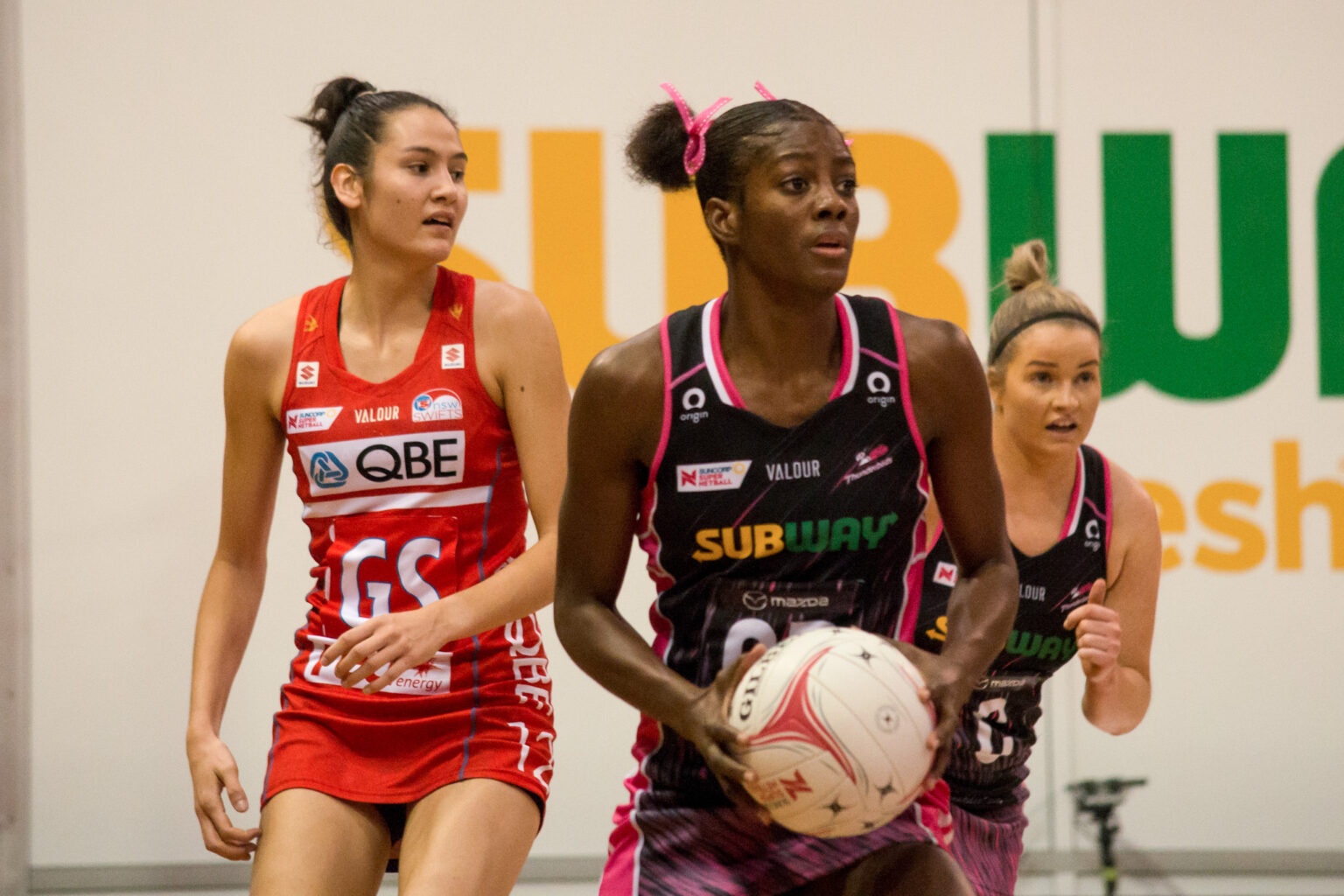 That'stwo losses in a row by just onefor the Thunderbirds, who, on this occasion, lost the ball to a penalty call, unable to convert their centre pass and tie things up in the final minute of the game.

After an intensity lift in the fourth, and with the crowd behind them, two super shots sunk by Georgie Horjus weren't enough to get the Thunderbirds up.

"I suppose it's more disappointment for the girls because they're busting their boiler at training and in the games, and it's really disappointing that we just can't quite [win].

"It's frustrating, but probably more disappointment for the girls that they can't quite get there."

Over in the NSW Swifts camp, a happier and relieved Briony Akle said her heart was "still going", after her team's tight victory.

"My heart is still racing... I just thought, both teams, it was so low scoring, it was backwards and forwards and I just said to my team, if we can grind this out, it's going to be ugly, it's going to be messy, whatever that feels like... [I'm] just proud of them."

It was a tight and low scoring opening quarter in Adelaide. The home side turned ball over, but was unable to make it count on the scoreboard.

Two Helen Housby super shots put the Swifts ahead by four, forcing Obst to call a time-out closing in on the quarter-time break.

In the second quarter, Latanya Wilson came on and dominated the Swifts' goal circle, Akle looking to her bench for changes of her own.

Kelly Singleton came on at goal attack, pushing Housby back into goal shooter, and the margin remained three at the main break.

It was all the Swifts in the opening minutes of the second half, with a five goal run stretching the lead out to eight. Horjus was already at goal attack improving things, but the re-injection of Wilson worked wonders for Adelaide. It found runs of three and four goals to bring the deficit back to three at the final break.

There were bursts of a new intensity level from the Thunderbirds in the fourth quarter, going goal for goal with the Swifts. However, two runs of three from the reigning premiers pushed the difference twice out to five, and it felt all but over.

A quick breather for Horjus and Wilson saw them come back firing for the final five minutes though. The former sunk two super shots and the latter caused havoc at the defensive end for her goalers to have those chances.

One final play on the Thunderbirds centre pass was their undoing, an offensive contact call against Maisie Nankivell turned the ball over and the Swifts did as they always do and ran down the clock.

It was a hard fought, gritty one goal win and the Swifts will be pleased to head back to Sydney having levelled their record.

Fawns got the nod to start in goal shooter for the Swifts, Akle said "not much" to the teenager before she lined up against one of the best players in the world in Shamera Sterling.

"I tried not to sort of feed her too much. I know how good Shamera (Sterling) is, I don't know if the 18 year old gets how good she was just playing against, so I honestly didn't try and feed her too much information and keep it simple.

"Shamera probably got the better of her in that first one, but she came back well."

While the Swifts are still testing out the combination with Sam Wallace out for the season with an ACL injury, the three shooters working across both positions seemed to be finding its functionality in its third game.

"I thought Kelly (Singleton) and Soph (Fawns) did a great job combined to be able to bring that home with Helen (Housby). And Helen showed amazing leadership out there, so hopefully back on track."

One member of that dangerous defensive duo Fawns came up against was Wilson, who Obst said was "incredible" on Wednesday night.

However, the stadium was left perplexed during the fourth quarter when Obst gave both Wilson and Horjus, who had been crucial in keeping the Thunderbirds in the hunt, a spell on the bench. Explaining the decision post-match, it was fatigue and a fresh look at the contest the coaches were after, and it was almost a masterstroke.

"And let's not forget, I don't think she'd had a minute off court prior to that time. So it was just about probably giving those two a little bit of time to compose, have a look at it from the bench, and then they both re-entered the game beautifully at the end."

It's another tough loss for the Thunderbirds, though they feel they are right around the mark to battle with the best this season. The two one goal defeats, "character building" smirked Obst.

"We got some reward with the win in the first two rounds, and two one-goal losses in the next two. So, character building...

"This is a world-class netball competition and no game is a given and every game is going to be played on its merits, and they obviously are coming off a great win.

So it's about us just going back and seeing how we can keep improving and making sure that we can make it easier for ourselves at the end of the game, rather than having to sort of slog it out like that."

The Thunderbirds now travel, for the first time this season, up to Brisbane to face the Firebirds, while the Swifts will head to Perth for a match-up with the Fever.