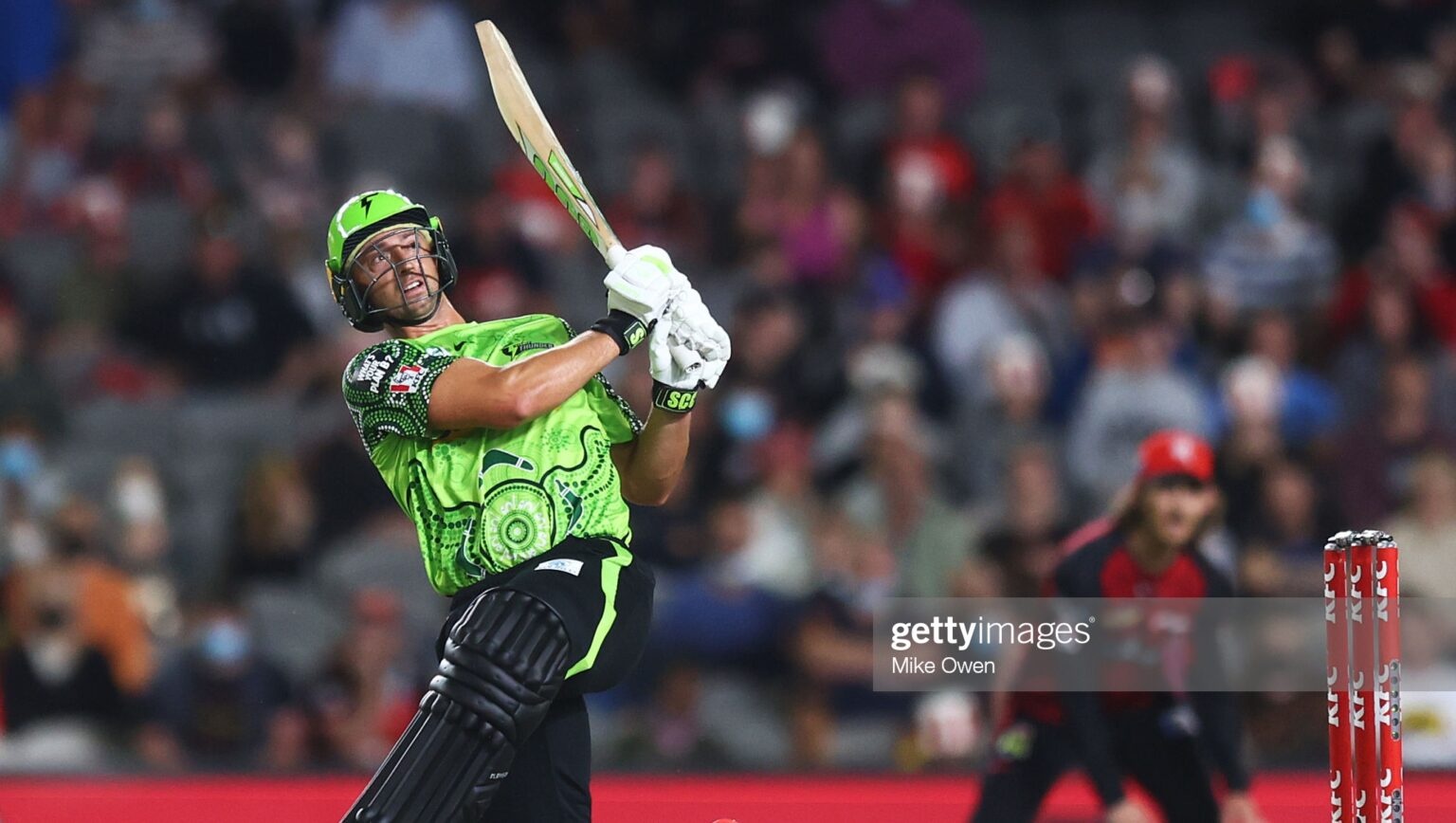 Daniel Sams' impressive knock of 98 runs not out off 44 balls was enough on its own for the Sydney Thunder to defeat the Melbourne Renegades.

Daniel Sams' impressive knock of 98 runs not out off 44 balls was enough on its own for the Sydney Thunder to defeat the Melbourne Renegades.

The Sydney Thunder had no issues taking home the win against an uninspired Melbourne Renegades at Marvel Stadium on Saturday, January 8.

The Renegades won the toss and elected to send the Thunder in to bat first, with Matthew Gilkes and Sam Hales opening the batting.

Gilkes settled into the big batting faster, hitting a six and a four in the first over, but the excitement was short-lived as he was caught and bowled by Zak Evans in the second over for 10 runs.

Joining Hales at the crease was stand-in skipper Jason Sangha, and Hales finished the over with two quick fours.

In the fifth over, Hales hit two sixes off Zahir Khan, then notched up another in the seventh over off Evans.

With his second ball, Will Sutherland knocked over the middle stump when bowling to stand-in skipper J Sangha in the eighth over, having him out for 21 - six runs short of 300 scored for the season.

The wicket brought Daniel Sams to the crease, and on his second ball faced, he smashed a six into the second tier.

Hales and Sams began putting together a high-scoring partnership until Hales mistimed a shot which was caught by Evans at long off.

Hales walked to the bench, having been on a huge strike rate of 63 runs off 28 balls.

Sams continued leading the batting charge, smashing a six the next ball to try and avenge Hales' wicket.

In over 15 and 16, Sams hit three massive sixes, but he lost his teammate Cutting to an impressive caught and bowled effort by Nic Maddinson.

Baxter Holt skied a ball to mid wicket to be out for two runs, and the Renegades finished their fielding spell with the run out of Nathan McAndrew thanks to a mix-up between batters on the last ball of the inning.

Sams walked off the oval having narrowly missed out on a century, slogging 98 runs not out off 44 balls at a strike rate of 222.73.

With a total of 209 runs to chase, the Renegades knew they had a mammoth task ahead of them, and Harper and Aaron Finch were the first batters to take it on.

This knowledge was not helpful as Harper was caught by Gurinder Sandhu at deep midwicket off J Sangha in the second over.

Finch was joined at the crease by Shaun Marsh and slogged two glorious sixes before Marsh was run out, then Nic Maddinson was caught in the same Muhammad Hasnain over.

An outside edge caught by Baxter Holt sent Mackenzie Harvey packing for just two runs in the fifth over, then in the next over Finch missed a ball and was bowled by Tanveer Sangha.

The Renegades looked to be in real trouble when Sutherland was lost for four runs in the seventh over.

Batters James Seymour and Richardson went just over five overs without a wicket but struggled to score, hitting just five boundaries in the partnership before Richardson was bowled by Sandhu for 17 runs.

Five balls later, Josh Lalor walked back to the pavilion having score just one run.

In over 15, Hasnain clean bowled Seymour with a rocket of a first ball then got Khan out with the second ball.

But he did not get the chance to go for a hat-trick because the Renegades were all out for 80 runs.

Player of the match was awarded to Sams for his impressive knock of 98 runs not out off 44 balls and taking one wicket for 10 runs.

The Thunder sits second after the win with 27 points, and the Renegades are sixth, with 15 points.