Three albums from Australian artists coming out this June

June sees a mix of albums from the Australian music scene. BLESSED makes his label debut, followed by albums from Thornhill and Vance Joy. 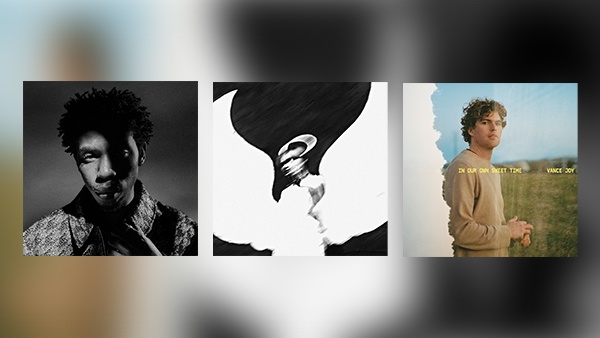 June 2022 starts off with a bang, with the release ofAUSSIEBLACKSTARandHeroinebefore the first week is over. Vance Joy'sIn Our Own Sweet Timefollows, ahead of his tour in September and October.

In addition to a long list of singles stretching back to 2016, BLESSED has worked with several notable artists on releases over the years. Prior to his big break, The Kid LAROI co-wroteBlessingswith BLESSED, who was using the moniker Miracle at the time. Other past collaborators include Justice Crew, Youngblood Hawke and Allday.

NO CHANGESandTROUBLEare stand out tracks, featuring strings throughout.TROUBLEhosts vocals from fellow Sydney-sider Maina Doe, with the pair reminiscing on past relationships.

Although Thornhill has been around since 2015,Heroineis only their second album, following their 2019 debut.Heroinehas a movie soundtrack feel to it, an intentional move from the band. Even the singles' lyrics were written as if they were a movie --Rawis through the perspective of an up-and-coming actress. Aptly namedHollywoodsees the protagonist face the realisation that he's fallen in love with someone else following a trip to Hollywood. In the track's lyrics his girlfriend pleads with him to admit"I’m in love with a girl here in Hollywood."

Edge of the Crowdhas our own resident Thornhill superfan in Dani Brown, who has seen them play 10+ times (Exhibit A). Here's what she had to say about her favourite single fromHeroine:

"Casanova heralded a new era of Thornhill, and boy, did it get tongues wagging! It appeared the band had evolved from the metalcore it is known and loved for, to some sort of metalcore/djent/rock fusion, leaving a small cohort of OG fans nonplussed. Many drew similarities to Muse, in particular through the distorted vocal and the theatrical sound, but the instrumentals were still undoubtedly heavy."

"The release was more "radio-friendly" than previous works by Thornhill, which has helped the band develop a larger fan base, and in turn opened more people up to metalcore and the wider heavy music scene. It has grown on many and it will be interesting to see where it fits amongst the upcoming album, Heroine."

EDGE OF THE CROWD’S MAY 2022 PLAYLIST

It's been a hot minute since Vance Joy dropped an album, but luckily for his fans, the wait is almost over! Featuring 2021'sMissing Piece, along withDon't FadeandClarity, Vance's new album already has a double platinum single to its name.

In Our Own Sweet Timeis Vance's third studio album, and is said to be his most personal project yet.Clarityshows Vance's vulnerability, singing,"When the road began to crumble in front of my eyes / There was only one person I wanted to find / It was you."

Vance is on tour in Australia from September onwards, kicking off in Darwin. Tickets can be foundhere.