Three Albums from Australian Artists coming out this March

The Wiggles will release a double album this March, featuring Australian artists. The Lazy Eyes and Bakers Eddy are both releasing debuts. 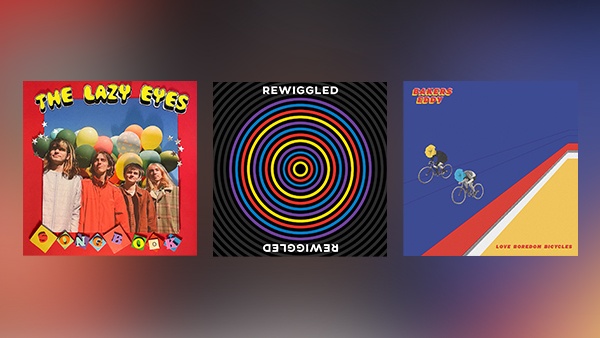 It's a band-heavy release month, with The Lazy Eyes, The Wiggles and Bakers Eddy all dropping albums throughout March. Read about the three albums below.

Sydney’s The Lazy Eyes are ready to release their debut album,SongBook. Despite being together since 2015, their earliest work was published in 2020, five years into performing together. Their connection is evident in both their performances and songs, making this “new” group even more exciting.

Their latest single,Hippois entirely instrumental, with a groovy bassline perfect for a study session. The psychedelic rock four-piece shine both vocally and instrumentally, as shown inThe IslandandFuzz Jam.

The Lazy Eyes will tour Australia throughout March, April and May before heading off to the United Kingdom. Later in the year, they will also support The Strokes in Sydney and Melbourne, giving fans plenty of opportunities to catch them live this year.

ReWiggledis something all Australians didn’t know they needed. This March, The Wiggles and co. will provide the goods – 27 Wiggles-related tracks for young and old.

The double album features 13 wiggles songs reimagined by Australian artists, followed by 14 covers from The Wiggles themselves. With fresh takes on The Wiggles’ classics,ReWiggledis a great way to introduce the younger generation to our awesome Aussie acts.

The entire Wiggles ensemble is on various tracks, including the original members Greg, Murray, Jeff and Anthony. The new expanded line-up, including a former Justice Crew member, is set to be included on the album.

Earlier in the year we were given a preview of what was to come, with The Chats coveringCan You (Point Your Fingers and Do the Twist?)and Spacey Jane coveringD.O.R.O.T.H.Y (My Favourite Dinosaur), complete with scarily accurate Dorothy adlibs. Other artists featured include DZ Deathrays, Dami Im and San Cisco.

EDGE OF THE CROWD’S FEBRUARY 2022 PLAYLIST

Bakers Eddy’s debut album is finally arriving, after being pushed back from its October 2021 release date. Originally from Wellington, the four-piece now call Melbourne home, proving themselves in the Aus music scene.

In anInstagram post, Bakers Eddy said, “We promise that this album is going to be so worth the wait.” Based on the tasters we’ve had ofLove Bordeom Bicycles, they’re right.Hi-Vis Babyplays on the bicycle element of the title, with lyrics relatable to all the cyclists out there, with lines like“My cycle / That’s my line / Don’t touch me”and“If you’re in a four-wheel-drive / You can fuck off.”

Another standout single is21,for the young adults trying to find their place in the world. It will no doubt go hard live, with its heavy drums and shoutable lyrics.Love Bordeom Bicyclesis just the start for Bakers Eddy, with more great things to come.