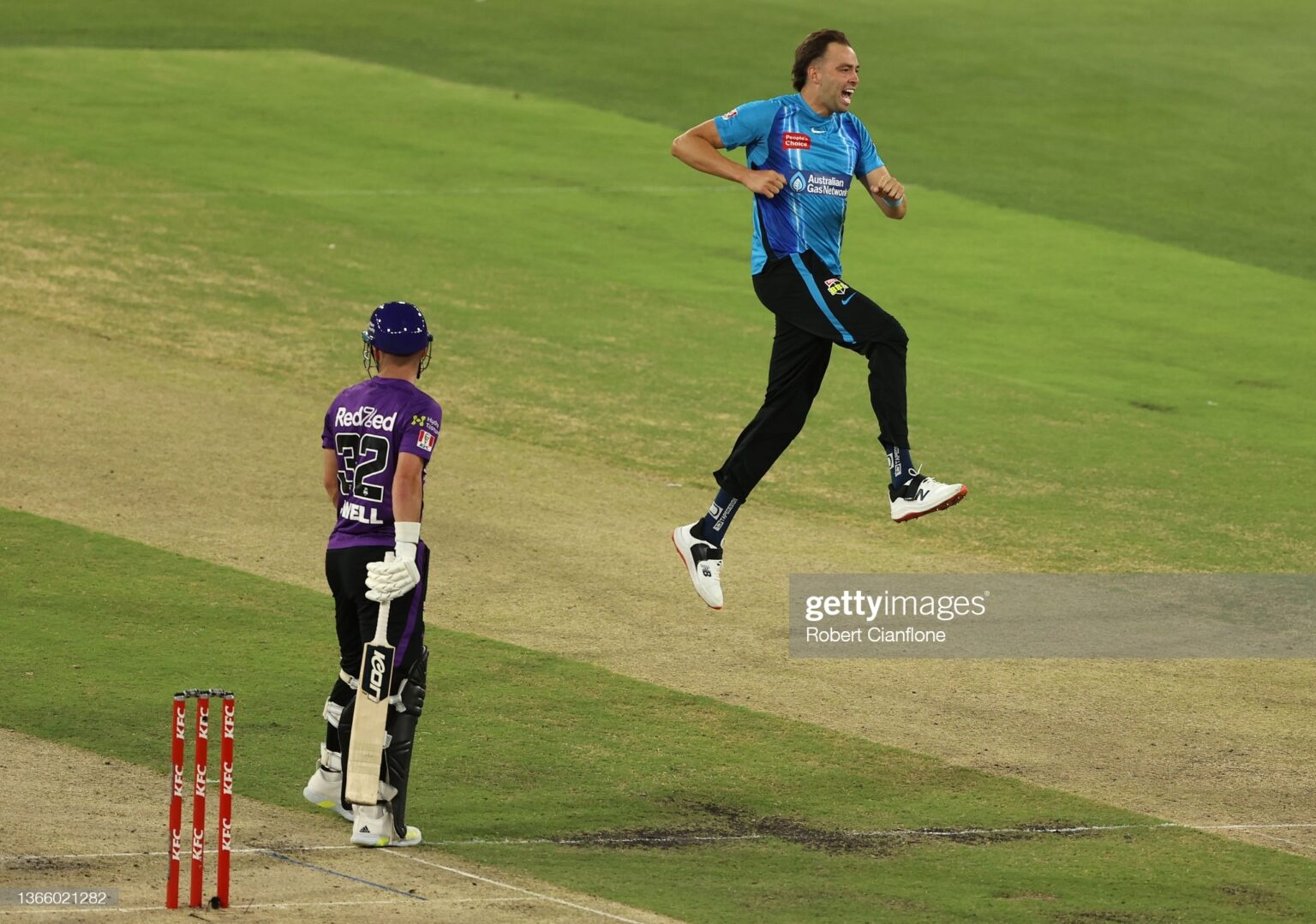 The Hobart Hurricanes strike out at the MCG

The Hobart Hurricanes have lost the eliminator BBL final to the Adelaide Strikers thanks to an 89 run effort to opener Matt Short.

The Hobart Hurricanes strike out at the MCG

The Hobart Hurricanes have lost the eliminator BBL final to the Adelaide Strikers thanks to an 89 run effort to opener Matt Short.

The Hobart Hurricanes struck out at the MCG as the Adelaide Strikers defeated them by 22 runs. The win gives the Strikers their fifth in a row, now securing themselves a position in the top four with a matchup coming against the Sydney Thunder on Sunday evening.

The match started in the Strikers favour with Alex Carey and Travis Head both coming back into the team along with Peter Siddle winning the bat flip and choosing to bat first. Alex Carey and Matt Short got off to a strong and steady start in the powerplay, giving the Hurricanes absolutely nothing.

The Strikers maintained the run rate above 10 per over finishing that powerplay with the score of 44 with the loss of no wickets. The 50 for the Strikers was brought up in the next over for only 28 balls before Alex Carey pushed towards 50 from only 29.

Carey’s knock was technically excellent, not giving the Hurricanes a realistic chance. He didn’t even need to clear the rope; it was the straight drive that he favourited tonight often pushing onto the front foot before lofting over the bowler’s head. If there were any questions over his spot in the ODI team for Australia they were certainly answered tonight.

It was Matt Short that was going ballistic at the other end that was really the highlight. He really has had a breakout season with the bat, being promoted to the top of the order. Through the year he was striking at a rate more than 150 and tonight that was no different finishing on 98 from 48 balls.

Short even managed to deposit his namesake D’Arcy Short into the stands on a couple of occasions giving the commentary team the chance to say "a long one to Short". It was an unbelievable innings smashing six sixes along with four boundaries to almost take the game away from the Hurricanes before they even had a chance to bat.

Unfortunately for Strikers fans he fell just short of a century getting a big top edge into the gloves of the keeper as he tried to launch the ball into the stands once again.

“He’s been the one to stand up and with Kez (Alex Carey) and Travis Head out, he’s really stood up with bat and ball," Siddle said.

The Hurricanes actually managed to take the game back in the second half of the innings. It started with the Strikers taking the power surge as soon as they could, but the Strikers couldn’t get going , consistently finding the fielders. In fact, the first wicket fell during the surge as the Carey looked to go big just after the 100 was brought up by the Strikers.

The rate continued to climb, getting up around 10 per over but wickets kept falling as Short, Head, Ian Cockbain and Matt Renshaw all went in quick time to give the Hurricanes a sniff of success. Unfortunately for the Hurricanes, it was all too late with the Strikers having already got a par score and everything after the 15 over mark was going to bonus runs.

From the 15thover to the final ball, the Strikers only managed to put on 38 runs, a much slower rate than most of their innings. Through a combination of a hard length from Scott Boland, extreme pace by Riley Meredith and perfect death bowling by Tom Rogers, the Hurricanes brought the Strikers back to a total of 188. While 188 wasn’t an impossible score, it was always going to be difficult for the Hurricanes to chase down.

Things literally couldn’t have started worse for the Hurricanes as the season's leading run-scorer in Ben McDermott was out in the very first over trying to go over long-on. It was Matt Short with the ball who took the all-important wicket combining with Peter Siddle as the catcher and from there, the run chase was going to be almost impossible.

Peter Siddle then took the next wicket, that of Matthew Wade on the very last ball of the powerplay. It was a silly shot but an important wicket as the two big hitters of the Hurricanes were now in the sheds.

Caleb Jewell and D’Arcy Short combined for a decent partnership although, Jewell’s strike rate of only 113 wasn’t going to be enough chasing down almost 190. The partnership was 39 before Jewell edged one through to the keeper off the bowling of Harry Conway.

The run rate slowed once again as Pete Handscomb joined Short at the crease. While Handscomb was slow, D’Arcy Short gave the Hurricanes some hopes as the power surge was taken hitting the ball all around the ground and once again allowing the commentators to say, "Short has gone long".

The Strikers could almost smell the win as the team's quick man who has come out of nowhere in 2021, Henry Thornton, took two wickets in consecutive balls.

Conway and Fawad Ahmed then took a little bit of stick off the bat of Tim David, but it wasn’t going to be enough with the run rate reaching almost 15 at that point. David cleared the boundary a couple of times before Siddle took the first of his three wickets at the death.

Will Parker, Scott Boland, and Riley Meredith then all went with relative ease as the Adelaide Strikers secured a position in the final at the SCG against the Sydney Thunder on Sunday.

Overall, it was a perfect performance from the Strikers who batted well up the top and then bowled with perfection. The only thing they need to improve against the Thunder is the death over batting and finding a way to clear the rope more often.

Peter Siddle spoke post-game about where the Strikers campaign is at.

“It’s amazing, I’ve said it before you go back a week and a half ago and our season was dead, and we were done. We’ve been playing amazing cricket and now we’ve had individuals stand up," he said.

“I can’t take any credit; in the last two seasons we’ve been able to stay in games but would end up losing. Personally, I started slow and wasn’t getting the job done with the ball.”

The BBL continues tomorrow night as the Perth Scorchers take on the Sydney Sixers and compete for a spot in The Final when play beings at 7:15 pm local time at Marvel Stadium.