The 2022 Grammy Awards red carpet was filled with colourful outfits and some of the biggest names in music bringing glam to the Las Vegas desert. 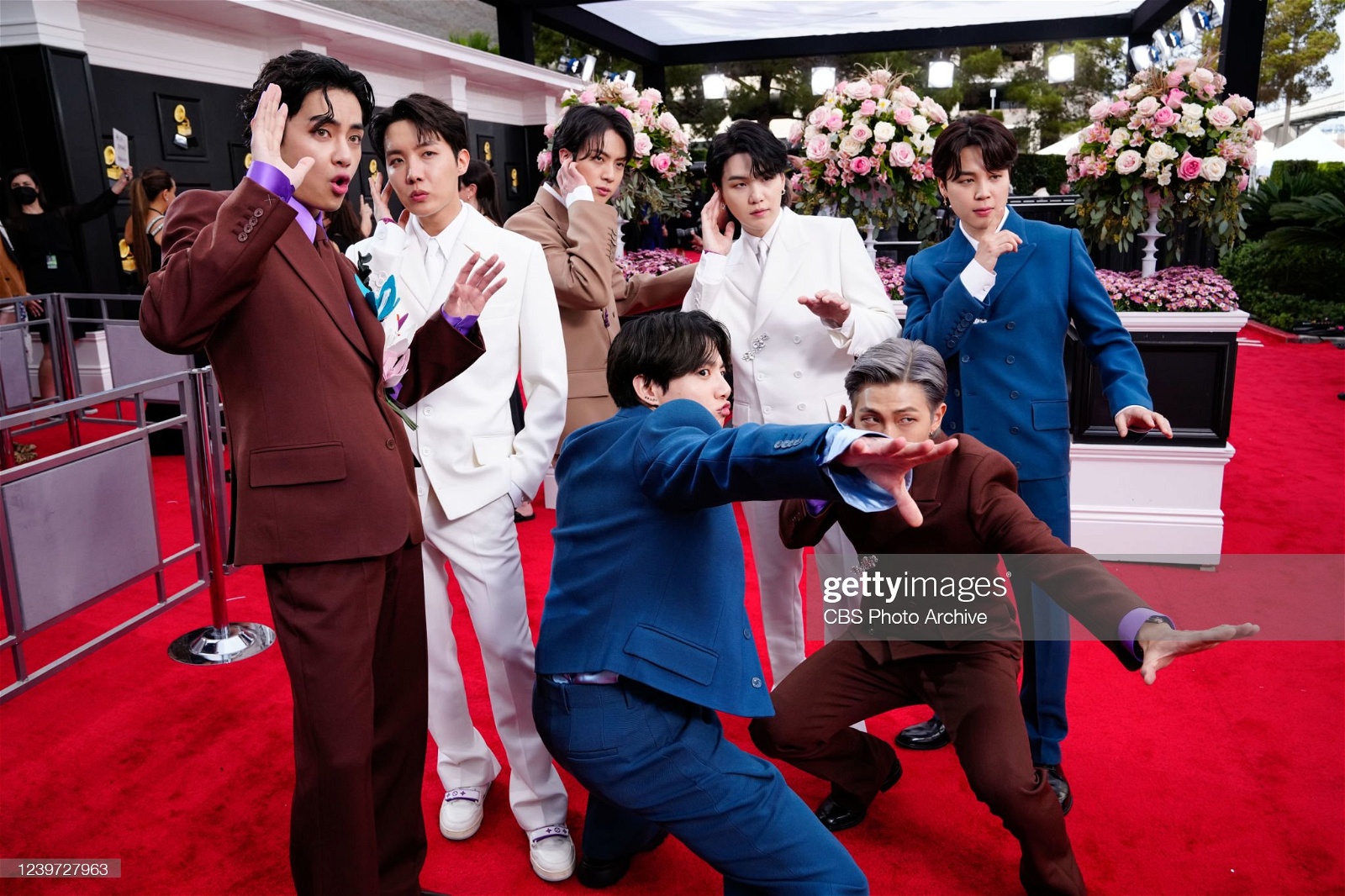 The 2022 Grammy Awards red carpet was filled with colourful outfits and some of the biggest names in music bringing glam to the Las Vegas desert.

THE LOOKS THAT HIT…

Dressed in Prada, Tiffany Haddish looked absolutely stunning on the Grammy's red carpet, no matter what angle you look at it from the gown just works and as always Haddish was feeling herself out on the red carpet today.

The country star turned heads in the Dolce and Gabbana gown at this year's Grammys. The look was only bolstered by the impeccable styling, Underwood has become music royalty in her 17 year long career and today she was dressed like a queen.

For a seven-member group, it's not always easy to have seven distinct but cohesive looks and yet dressed in Louis Vuitton the Korean Pop superstars of BTS managed to pull it off with no two members looking identical due to the subtle changes to each member's ensemble to complement their own personal style.

Of course, no one stood out in the group more than V dressed in a burgundy suit with the oversized floral boutonniere but every member stood out in their own ways and would have looked just as good individually as they do in a group.

Maybe I'm just a sucker for what Gucci has been doing this awards season, but St Vincent was stunning out on the red carpet.

If it was a sleeveless gown perhaps it wouldn't have been quite as memorable and would have drawn even more comparisons to Jessica Chastain at the Academy Awards last week but with the flowy sleeves it brought red carpet glamour to a silhouette that is often attributed to the 'rich husband has mysteriously died' robe.

In two very different suits, Brandi Carlile and Catherine Shepherd looked incredible on the red carpet with both managing to stand out without clashing.

Carlile said she felt like a boss and that wasn't just because she was dressed in BOSS with the sparkly coat matched with an equally bedazzled belt. Meanwhile Shepherd's simple black suit with softer touches such as the ruffled blouse and wavy updo offered a different kind of sparkle to her wife.

SZA regularly serves on a red carpet and dressed in Jean Paul Gaultier this year's Grammys was no different. Even without the floral design at the front, the 31-year-old still would have killed it, but with the design, it only adds to the look giving us something different as SZA typically opts for one or two colour looks on the red carpet.

She might have been on crutches for most of the night but she wasn't going to let that get in the way of this incredible look.

Always looking whacky but wonderful, Lil Nas X still manages to shock in Balmain with the ensemble encrusted in pearls head to toe while the butterfly design on his chest, arms and back ensured that no matter what angle he was captured at there was always a pop of colour.

He'll have to one-up this look in a month's time at the MET Gala and trust that this is just the beginning of another year of incredible Lil Nas X looks.

When you're inspired by a legend like Aretha Franklin you have do to her justice and that's exactly what H.E.R. in a custom Dundas jumpsuit did.

The 24-year-old didn't need to do much more than wear the gorgeous jumpsuit but the added touches of the coloured sunglasses and stunning hair added to an already iconic look.

We've come a long way from Lady Gaga's wild outfits that left parents horrified. In 2022 the icon was in an Armani Prive gown looking like she'd been dropped straight out of Old Hollywood and while it wasn't what she wore on stage to perform a jazzy tribute to her long time friend Tony Bennett it was a look no one should miss.

Dressed in Versace Dua Lipa looked gorgeous on the red carpet going for something a little more edgy on a red carpet that was littered with soft silhouettes and gowns that while stunning were run of the mill.

HOW IS TIKTOK AFFECTING FASHION?

THREE ALBUMS FROM AUSTRALIAN ARTISTS COMING OUT THIS APRIL

… AND THOSE THAT MISSED

Some might say Donatella never change but this look could have been missed entirely. From the double platform boots to the hair sitting over the shoulders the styling does nothing to help the dress that already doesn't work for Versace.

Perhaps some parts could be forgiven, and Donatella's trademarks will always be iconic, but when you can clearly see the waist cincher underneath the transparent fabric it sends the look further off course.

Sometimes when couples don't go for something that matches it's praise worthy, see the hits of this very article, but Justin and Hailey Bieber having completely different looks did nothing to make either one of them look any better.

In an oversized Balenciaga suit Beiber draws on memories of kids wearing dad's suit jacket while playing a game rather than a two time Grammy Award winner.

Billie Eilish's all black looks are getting tired and this ensemble by Rick Owens just doesn't do it. The hair and sunglasses are incredible but the head does not match the outfit which doesn't match the shoes.

Perhaps if the look was more cohesive or if she'd worn some jewelry that had a few pops of colour it would have been forgiven but there needs to be something more than the oversized black ensembles we've seen this awards season.

Separately Claudia Sulewski and Finneas O'Connell both look pretty good and there is a lot to like about these looks, especially the colour pallette but together that's where these looks miss.

Namely because of the fabric, silk suits are hard to pull off and while they do an admirable job there's still a pyjama like quality to them paired together. Which hopefully leaves them both feeling comfortable but just throws them in the miss category despite how much it hurts to say so.

From the neck up Melody Thornton looks incredible, the hair and make up as well as the jewellery are gorgeous but the dress just isn't.

For an all white piece it is strange to say that there's too much going on but that's how it is with the feathered look as well as the flouncy fabric not helping Thornton and paired with the red clutch and bright red nails your eyes aren't even drawn towards the garment, which makes you scrutinise it more heavily when you choose to look at it.