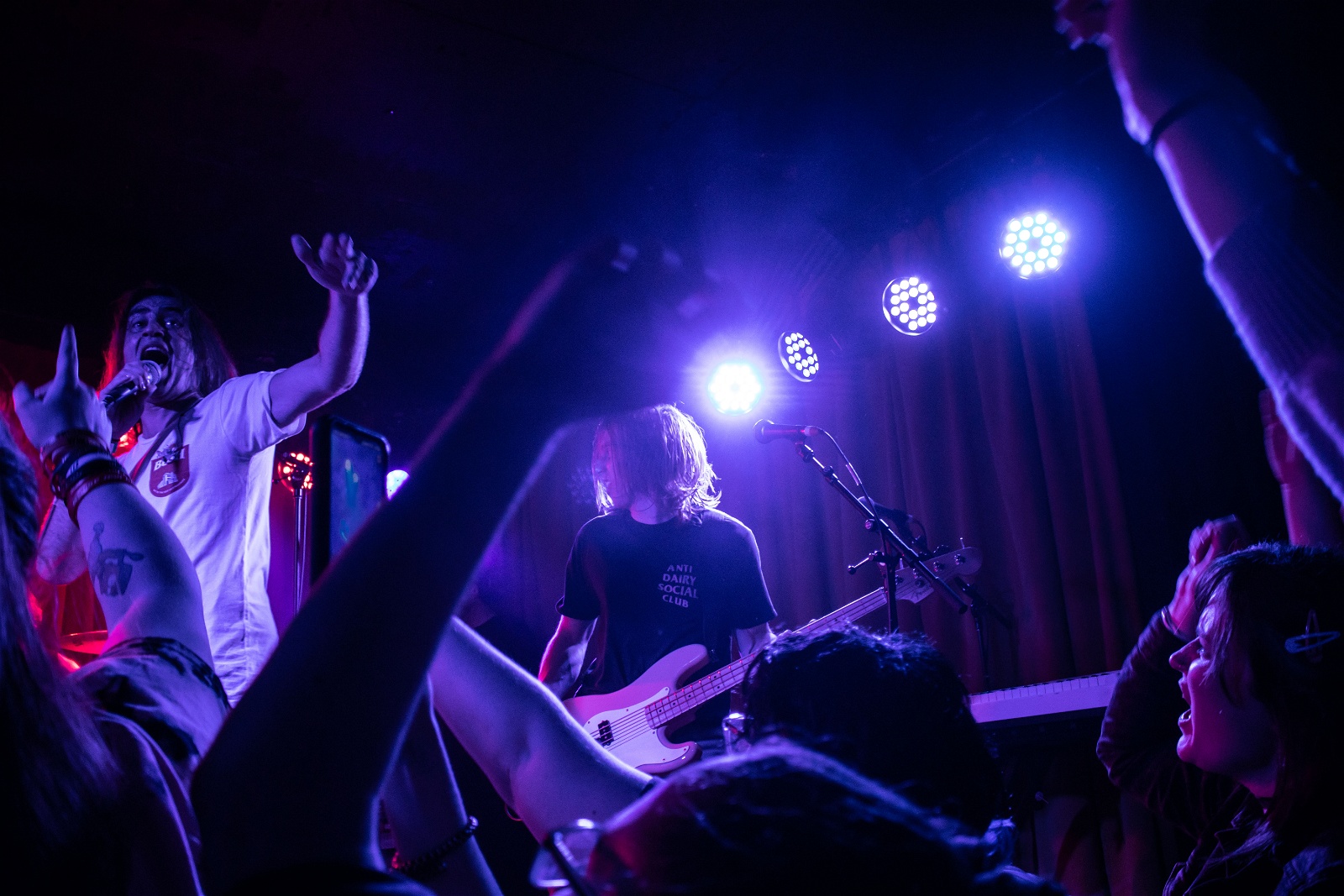 The Faim return to Aussie shores to debut 'Talk Talk'

Perth's The Faim performed for fans at The Evelyn Hotel on July 30th.

The Faim return to Aussie shores to debut 'Talk Talk'

Perth's The Faim performed for fans at The Evelyn Hotel on July 30th.

As I arrived about thirty minutes before doors, quite a few people were already lined up inside for the show. This appeared to surprise some of the bar staff, which I could overhear talking about how many people had shown up early. As we waited, several performers passed us, including members of The Faim, who briefly stopped to chat with fans.

Fellow Perth outfit Bad Weather started the night off, performing released and unreleased songs. Despite having a reasonably low following comparatively, there were members of the crowd who sang along with Callum Robertson.

This was Bad Weather's first national tour, performing exclusively in Perth before the Talk Talk tour. During the set, Cal thanked the crowd, telling them the trio were having the best time, a sentiment that was continued well after the show.

One of my standout tracks was Who Do You Wanna Be, set to release on Bad Weather's debut EP this August. Before performing the song, Cal shared that it was one of his favourites, partly because he "didn't have to play guitar" during it.

Despite this comment, Cal's guitar work was nothing to laugh at, proving himself a capable guitarist, particularly during All I Know. Bandmates Jono Dimascio (bass) and Brad Forbes (drums) were introduced to the crowd just before the final song, Teenagers In Love.

The hometown performers of the night were Terra, a five-piece pop punk group who made the stage their own. Complete with red eye make-up and face paint, I was in awe of the bassist and two guitarists, who frequently crossed the stage to interact with one another.

All five members looked genuinely stoked to be there, running about and showing their skills to the crowd. Early in the set, two guests made an appearance on stage to sing, with the latter getting a big kiss from guitarist Joey Knight as they left the stage.

Terra certainly captured the audience's attention, pulling out every trick in the book. At one point, Joey slid his tongue up the fretboard of his guitar -- very punk rock! As they played, a pair of heart-shaped sunglasses made its rounds, worn by almost every member during the set.

Unfortunately for lead vocalist Cassie Jade, myself and others felt her vocals were drowned out slightly, inhibiting the audience's ability to hear her incredible voice. Despite this, some members of the crowd were passionately singing along, clearly well-versed in Terra's discography.

At around 10:30, The Faim appeared on stage, kicking things off with Ease My Mind, the lead single off their recent album. Josh encouraged the audience to sing along in the chorus, pointing the microphone in our direction. Following the track, Josh greeted the audience, "Hello my beautiful people!"

For the next song, Josh continued to get the crowd involved, clapping and singing the chorus to Tongue Tied. "Are you enjoying yourselves?" he asked the crowd. "Me too." Throughout the night, Josh would continue to check in with the audience, making them feel more involved in the set.

Around this time, I noticed one of his in-ears was out. For the remainder of the evening, Josh played with only one in – helping him to hear the crowd's singing. After the band's third song (ERA), he even told the crowd they "sound[ed] beautiful."

Although Josh often addressed the crowd, his bandmates were quiet throughout the set, connecting with fans via smiles and posing for videos/photos.

After playing one of their classic older songs, Saints of the Sinners, Josh asked the crowd if anyone felt like moshing. Although the crowd was receptive, there was a slight communication breakdown regarding the dedicated mosh time of the evening. During the bridge of State of Mind, Josh came into the parted crowd, building them up for the outro.

Coming off festival shows with massive crowds, The Faim are used to a wild audience, something shown in their social media posts. Later in the night, the crowd redeemed themselves with a group jump on command after some teasing from Josh.

For a brief moment, the set was toned down a notch for the band to perform Make Believe. With Stephen on keys and the crowd singing along, you almost forgot that The Faim are known for their high-energy music.

At the set's mid-point, Josh gave a shout-out to Bad Weather and Terra, telling listeners that they "deserve your fucking time." During the night, he would often talk about the openers, asking fans to give them a listen.

Before performing Flowers, Josh told fans about the song's birth, sharing, "We wrote this in Perth in a small granny flat with all four of us invading our personal space." Flowers gave all the band members a chance to shine, particularly guitarist Sam.

Soon, Josh declared, "I regretfully inform you we have two more songs left". This prompted a member of the crowd, who also happened to be Terra's bassist, to yell, "Play The Hills". Josh quickly responded, "We fucking will!" which elicited a cheer from the crowd.

As promised, The Hills closed out The Faim's set. This fed off the hype built during Summer Is A Curse, ideally, ending the show on an energetic note.

Despite having to travel to Adelaide the following day, the musicians took the time to hang around after the show to chat with fans and take pictures. Before the show, The Faim's Stephen was even selling merch, showing how down-to-earth the group is, despite their success.