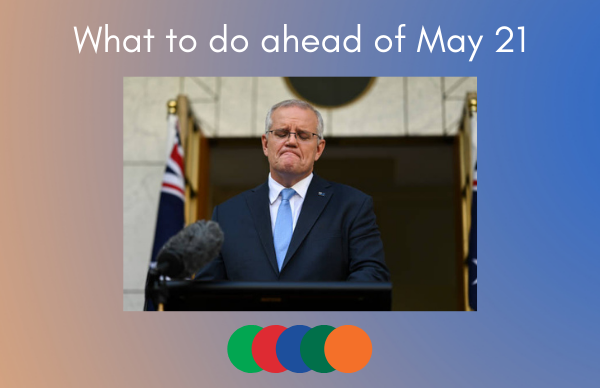 The election has been called but what do you need to do now?

With the election called for May 21, that doesn't mean sit and wait to go out and vote, there are a few things you'll need to do before we get to election day.

The election has been called but what do you need to do now?

With the election called for May 21, that doesn't mean sit and wait to go out and vote, there are a few things you'll need to do before we get to election day.

With Prime Minister Scott Morrison calling the Federal Election for May 21, we now know that we'll have a six-week election campaign but that doesn't mean sit and wait to go and vote, there are a few things you'll need to do before we get to election day.

Something that might have slipped your mind if you've moved in the past three years is changing your enrollment details with the Australian Electoral Commission, now that the election has been called you have seven days from Monday to make sure your details are correct.

This can be done online via theAEC website, and should only take a few minutes but is crucial to vote in the electorate you live in, and even more important if you've moved interstate in the past three years.

More importantly, if you've only just turned 18 in the past three years and haven't had the opportunity to vote in a state election, you need to enrol to vote as soon as you can get to a computer because the process isn't quite as easy.

You'll need either an Australian passport, an Australian driver's licence (or learners) or someone who is currently on the electoral roll to confirm your identity, such as an older family member.

You're able to enrol either online or by downloading and printing an enrollment form from the AEC website and mailing it in, however, if you choose to mail it in, you need to do so by Monday at the latest as it doesn't matter when you send the enrollment form in, it's when the AEC receives it and with the deadline falling during Easter Weekend mail might not be as quick as normal.

Once you've enrolled make sure to check a few days later, all you'll need is your name (including middle name) and your address, and to go to theAEC website to check your enrollment.It will not only confirm your enrollment but also tell you what electorate you're enrolled to vote in which is useful for people in the cities that may be on the fringe of two electorates.

Learn who your House of Representatives candidates are

Now that you're enrolled to vote there are a few key things you need to get educated on, which is fairly simple considering there will likely be ads all over your social media feed, on your tv and around your electorate but you may have to look a little harder for some details.

The first thing to remember, especially if you're voting in your first election is that you vote for local representatives, not for a Prime Minister in Australia, it's important to consider the party that could take power but that's not the only detail that's important.

Look into who is in your electorate and which ones have policies that align with what you believe is important, you might lean more towards the Nationals and their policy direction but the Nationals aren't running in every seat, especially seats with Liberal MPs.

Does that mean you should just vote one for the Liberal Party candidate because they're in a coalition?

Not necessarily. While the parties are aligned they aren't always in agreement and the Liberal candidate may have some policies you're against, but that doesn't mean Labor and the Greens are the only options.

Independents come from a variety of political alignments and you may find one that you prefer the policies of and therefore you should preference them higher on your voting card.

You'll hear it over and over again throughout the campaign, 'vote one for x party'. Australia has a preferential voting system, which sounds complicated but what it really means is you rank who you want to win the election so your first and second choice is incredibly important but so is your last choice.

If you're vehemently against a major party or a specific candidate, putting them last will not only be incredibly satisfying but guarantees your vote won't be counted for them if it's a tight election in your seat.

Another way to get to know who your candidates are is to go out and listen to the candidates speak, especially in forums where you might be able to go and ask a few questions.

This could be at a local train station on a Tuesday morning that they've advertised on their social media, a local town hall-style conference or as has become more common during the pandemic, over zoom where they are speaking on a specific topic.

The House of Representatives takes more work to figure out who you want to vote for but the Senate definitely takes more time in the voting booth. On election day you'll be handed a large white piece of paper that goes up both sides of the booth and if you've never encountered it before it can certainly be daunting.

You have two options in the senate, vote above the line or below the line and there are merits to both.

Above the line, you'll vote for the parties based on their inner party preferences which means if everyone voted above the line and Labor won five Senate seats in your state it would be the five that Labor chose prior to the election to take the seats.

However, if you're voting below the line you can mix it up a little bit and vote for the individuals rather than the parties, for example, if you live in South Australia you may lean more towards the Greens but favour someone like Penny Wong and want to put her first, the Greens candidates as all your next choices and then go back to the Labor candidates or choose from some of the minor parties that you like the sounds of their policies.

The thing with the senate is it's very easy to feel lost and going in with a plan, knowing how you want to approach it is important so you're not stuck in the booth for 20 minutes. Figure out who you want and figure out who you don't want the fringe parties with funny names are fun to vote for but if you don't know anything about them you don't even have to give them a number.

Above the line, you are only required to number one through six, and below the line, it's just one through 12. You can go through every single box if you'd like to, your vote will still count although it will take a lot of time as it can go well into the 60s but for your vote to count you need to hit the minimums which will be clearly written on your ballot.

Figure out when to vote and where to vote

Election day is May 21 but that doesn't mean you have to vote on May 21. In Australia we have mandatory voting so if you've enrolled you have to vote if you don't want to receive a fine and because of that, you have plenty of opportunities to vote.

The first and most obvious is election day voting, there are plenty of polling places, in particular, most schools are places you can go to vote and that's where you'll be able to get your hands on a democracy sausage or a baked good if they're running a cake stall.

The lines may be long but you'll be able to pick up the how-to-vote cards with all the party's preferences and talk to candidates' volunteers who may help sway you more towards them.

However, if you're working all day Saturday or away on election day you will have two weeks of pre-polling prior to the 21st to vote. The access isn't quite as easy and you can look on the AEC website for pre-polling locations, the act of voting is very much the same and you'll still be able to pick up some of the information to see how the parties would like you to preferencebut remember you don't have to follow those cards.

Then there is mail-in voting, which is only recommended if you absolutely have to as your vote likely won't be counted until a few days after election night and there is an increased chance your vote will be thrown out due to the form having incomplete information. It's an easy mistake to make and once you've posted the ballot it's impossible to correct the error.

If you absolutely need to due to illness, injury or other reasons, you will need to register as ageneral postal voter, if you meet the eligibility requirements, you'll be mailed your ballots which will be sent out after the election has been called. You'll need to fill them out and send them back as early as you can but be sure it is filled out correctly so your vote is still counted.

Enjoy the theatre of the campaign

This is less of a must-do, and more for people who are just getting clued into the campaign and are easily tired of the political squabbling throughout the election.

There are some traditions Aussies love with elections the most popular being getting a democracy sausage on election day. If you'd like to get one you'll need to bring a gold coin donation, they certainly aren't for free but not every polling place has one so you might have to do the tradition a little differently and get a chocolate crackle or some vanilla slice if that's what is on offer instead.

Give Vote Compass a go, even if you're settled in your beliefs and know who you want to vote for the ABC's Vote Compass can be done on the couch while you're watching the tv or bored of the lunchroom conversation at work.

It only takes 10 minutes and it can be entertaining to scoff at some of the questions that will make you ask 'who in the country is in favour of that?'

If you're a frequent social media user, there is entertaining political content no matter where you go, on TikTok there are plenty of users making content that will be making fun of gaffes made by either side or just lipsyncing to the interviews and campaign speeches of the political leaders.

Facebook and Twitter have plenty of squabbling but there are just as many people finding the funny moments in the election and making plenty of memes about them.

And on election day there are always entertaining informal voting cards, which we atEdge of the Crowddo not recommend doing, but still get a laugh out of with people writing in Simpsons characters as their first choice or Australian icons like Lee Lin Chin. If you'd like to see some from past yearsBuzzfeedhas a list of some of the write-ins from the 2016 Federal Election.

And lastly, tune in toEdge of the Crowd'sAustralian politics podcast Edge of the Election. We'll have new episodes on Tuesday and be breaking down the campaign news of the week as well as our always entertaining final segment 'Please Explain' where the gang talk about some of the fails from the past week.