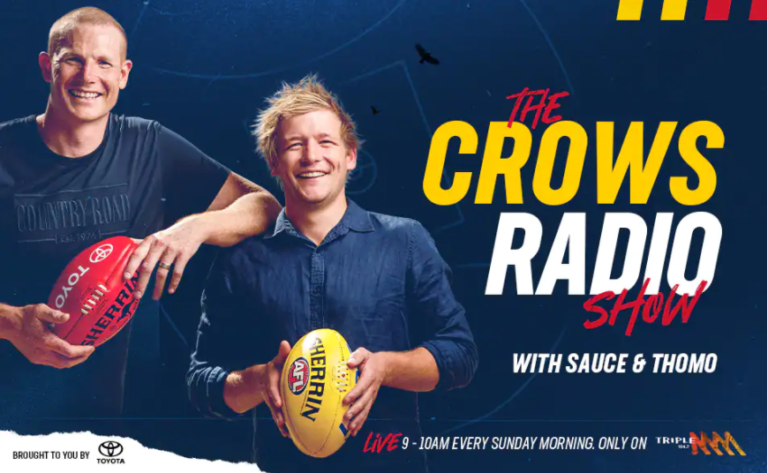 The Crows Show is set to hit radio waves in 2022 as former big man Sam Jacobs leads a unique broadcast from a Crows fans perspective.

The Crows Show is set to hit radio waves in 2022 as former big man Sam Jacobs leads a unique broadcast from a Crows fans perspective.

The Adelaide Crows are set to launch their own radio show on Adelaide’s 104.7 Triple M during the 2022 home and away season.

The show is set to bring unparalleled access to the team, as well as analysis and news from the Adelaide Crows' perspective. The show is set to be hosted by former Crows' big man Sam Jacobs and Triple M's Mark Thomas, who are going to bring a lighter side to the seriousness of football.

Adelaide will become the first and only AFL team to have both a free to air TV show and a free radio show, with Belinda Sloane joining Mark Bickley on the TV program.

On Sunday, the show debuted with a feature chat with young midfielder Ned McHenry, as well as a flashback moment with Jason Porplyzia. Among the serious stuff was a chat about locker room banter, giving an insight into behind the scenes of the Adelaide Football Club.

“The Crows Show has been such a massive part of the Club for so long, and it is great to join this family with the radio show.

“Thomo is a great guy who loves his football, and I can’t wait to work alongside him this year.

“As a past player, I have a connection to the playing group but I’m also really passionate about the great history of our Club and making sure we bring this to life and engage with our members and fans as much as possible.

“Having both shows are something that is really unique in Australian sport, and we are looking forward to bringing our supporters on the journey with us this season and beyond.”

The show on Sunday didn’t quite pay off for the team with them going down by one point against Fremantle at home.

The Adelaide Crows will now travel to Melbourne this weekend for a match against Collingwood with the game getting underway on Saturday at 1:45 pm.

The Crows Show on the radio will return this Sunday between 9am and 10am, the TV version will air at 3pm on Sunday.