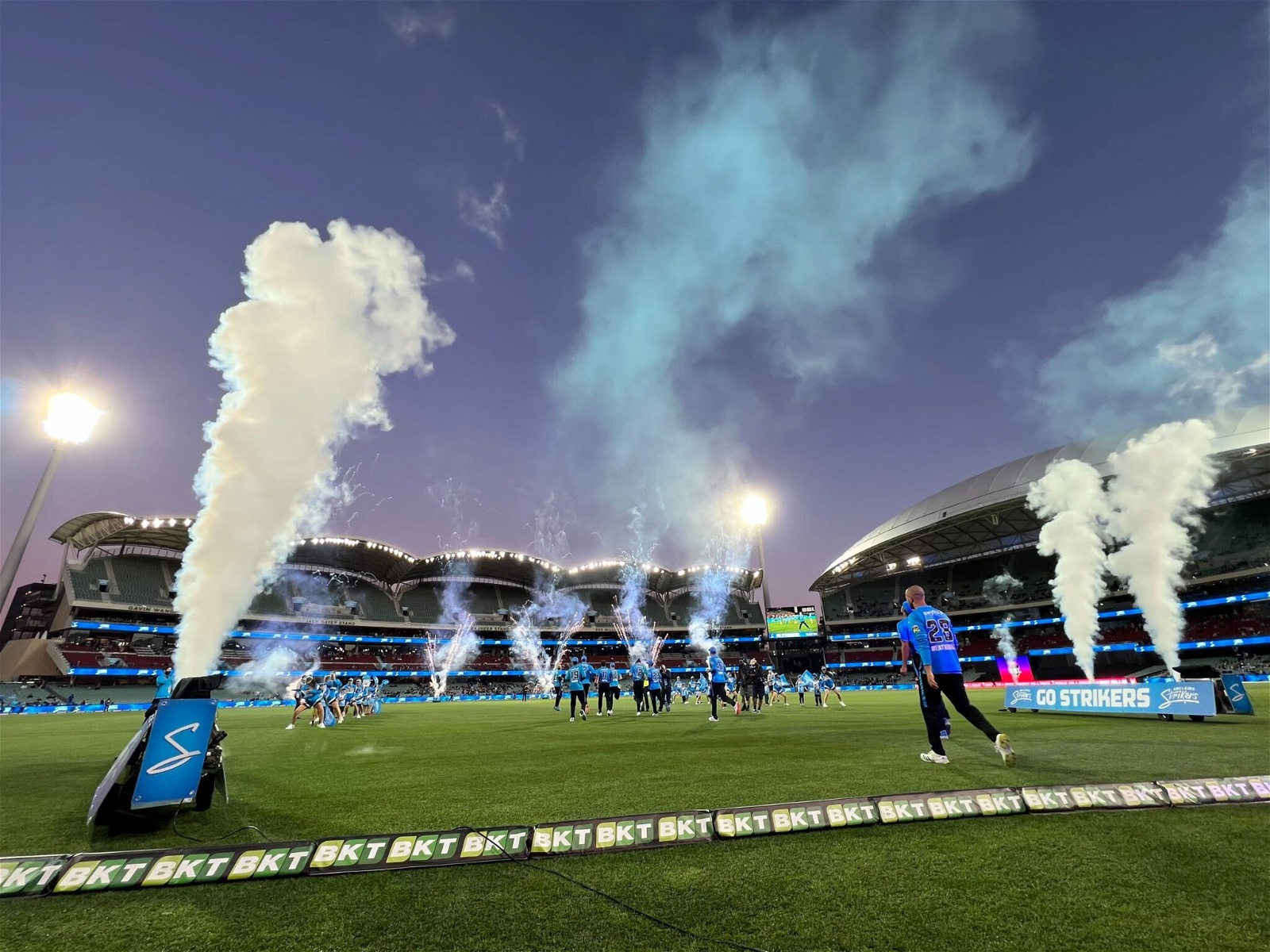 The Big Bash is at the halfway point. how are the teams doing?

The Big Bash is now halfway through with the Perth Scorchers dominating at the top of the table, but how are the other teams doing?

The Big Bash is at the halfway point. how are the teams doing?

The Big Bash is now halfway through with the Perth Scorchers dominating at the top of the table, but how are the other teams doing?

The eleventh edition of the Big Bash has now completed half of its matches. While it’s been great to have the cricket back, it’s clear that the competition isn’t where it was in years past.

Perhaps it’s due to COVID, but the crowds are well down, and the quality of cricket also seems to have decreased. Unfortunately, COVID has now infiltrated the camps with two Perth Scorchers, four Sydney Thunder and a total of 18 from the Melbourne Stars now isolating due to COVID.

The Melbourne Stars even had to call up grade cricketers into their most recent squad. While the competition is now in a weird state where no one knows if the competition should really go ahead, there is no doubt it’s great to have cricket on TV every night.

Edge of the Crowdtakes a look at each of the BBL teams and where they are positioned at the halfway mark of the season.

The Renegades have continued their terrible run which began last year. Their team is both too young and too inexperienced to really compete with the teams up the top of the ladder.

What really hasn’t helped is the number of games the experienced members of the squad have missed. Aaron Finch missed the first three matches with a knee injury, while Shaun Marsh is still yet to play a game, although he has been named in the most recent squad. Captain Nic Maddinson has also missed most of the season with national selection even though he hasn’t played a match for Australia.

Things haven’t been all bad for the Renegades though, Mackenzie Harvey has stood up with the bat to average 38.20. The man who has stood in as skipper for a lot of the year, Kane Richardson, has also done very well taking nine wickets from six matches at an average of 19.

Going forward the Renegades will be looking to give more experience to the young players which they are hoping to build the next decade around.

The Strikers have struggled to close out games especially on the batting front. It really has been a tale of two halves for the Strikers who have managed to win the Bash Boost point in six matches while only going on to win one.

Losing Alex Carey and Travis Head to international selection for the summer was always going to make it difficult for the Strikers. However, what cannot be excused is the lack of innovation by the coaching staff when it comes to the batting order.

While teams are allowed three internationals in the BBL, the Strikers have decided upon only two and both of these are bowlers. With so much firepower out of the squad, the recruiting really should have focused on bolstering the batting.

Matt Renshaw has come into his own with the added responsibility of being a senior player. While he is the only Striker to average over 30 having hit 177 runs at 35.40, he is yet to hit a six. No surprises Rashid Khan has been the man with the ball taking 11 wickets at 20 at an economy rate of only 6.87.

What can we say about the Melbourne Stars, they are certainly in a lot of trouble with the COVID situation? All that can be done is hope that everyone gets through the illness and comes through the other side healthy and happy.

The Stars have now used 23 players through the BBL and with more COVID cases in addition to the 10 players already infected likely that number could swell over the next few matches. It is hard to see them adding to their three wins going forward but with a clash against the Renegades coming up they may still have a chance.

Hilton Cartwright looks to be back in career-best form, he has hit the ball harder and further than almost anyone in the competition. His 215 runs have come off only 144 balls giving him a strike rate of 149.30. Surprisingly it has been a rookie in Brody Crouch who has been their best bowler with 11 wickets at an average of 19.09.

Moving towards the end of the tournament the Stars will just be focusing on putting on a good show and making sure they can get 11 healthy players out on the field.

Does anything really ever change for the Brisbane Heat? They have been inconsistent at best and terrible at worst. That being said a fifth-place finish would get them into the finals, and with the Stars in their current predicament, it is hard to see the Heat moving out of fifth.

Nothing summed up how the Heat play more than their match against the Sydney Sixers. They were bowled out for only 105 before they had the Sixers in a precarious position at 8/47. The Heat somehow let the game slip to go on and lose that match, it pretty much sums up every year of the BBL for the Heat since BBL|03.

Sam Heazlett has been their most important batter through the middle overs having struck 230 runs at 32.85. What the Heat really needs though is either Max Bryant or Chris Lynn to score more consistently at the top of the order. With the ball, James Bazley has burst onto the scene with 11 wickets at 21.

If the Heat can put together two or three more wins, they should guarantee a finals position, and we all know that anything can happen when finals come around.

EDGE OF THE CROWD’S BBL PREDICTIONS

The Hurricanes are even stevens having won four and lost four of their matches. The Hurricanes are probably the most consistent team in terms of skill of both bat and ball. What has been most incredible though has been to see the rise of players of which many wouldn’t have heard of before.

The Hurricanes go in as underdogs more often than not, just because of how underrated they are, but the key really is that any player in their line up could win a match from their own bat or with the ball. Rather than go with big-name overseas players, they have gone with players that the recruiters think would be effective.

One man who has done a lot without being effective is D’Arcy Short, the opening batter has hit an impressive 233 runs at an average of 33 through the season. While those numbers are impressive the issue is his strike rate of only 99, which just isn’t fast enough for T20 cricket.

Someone who hasn’t had to worry about strike rate is Ben McDermott who has smashed a competition topping 353 runs at an average of 70 while striking at 168. Most impressively he has hit two centuries which came in back-to-back matches. Tom Rogers has been the man with the ball taking 14 wickets in his seven games at an average of only 13.

The Sydney Thunder are also often overlooked as the smaller Sydney team. That being said, they can’t be overlooked any further, they are simply improving every day.

Led by Chris Green with full time captain Usman Khawaja on national duty, he seems to have embraced the younger players while still letting the older players do their work. An issue they are going to have moving forward is both Sam Billings and Saqib Mahmood will have to leave the side to join the England T20 team in London.

With four players out due to COVID there are certainly going to be a lot more challenges going forward, all they can do is hope they don’t end up like the Melbourne Stars.

Jason Sangha has burst onto the scene for the Thunder hitting two half centuries in his five matches, for overall figures of 239 runs at an average of 79.66. With the ball it has been Dan Sams who has dominated with 12 wickets, although Mohammad Hasnain deserves a shout out for three wickets in his debut over.

The Sixers have continued what has been an amazing three years for the franchise. The Moises Henriques led side looks like they may do what no other BBL side has down and make it a hat-trick of trophies.

In some ways, the Sixers have been lucky to not have been struck down with COVID or the international selections that other teams have had to face. Their only loss of the season came against the Hurricanes in an 18 over rain-affected match, from there though they have been almost faultless.

Perhaps the game against the Heat in which they chased 106 with eight wickets lost might give them that extra motivation you need to win a title.

Josh Phillippe was the man for the Sixers early on and while his results have suffered slightly as of late his overall numbers are still incredible. 295 runs at almost 50, with three half centuries to the young wicketkeeper batter. This is complemented by the 12 wickets that Sean Abbott has taken at 11.66, he can’t be too far away from Aussie selection.

The Sixers need to put their heads down, stay away from COVID as much as they can and get themselves to the final. If they can manage that, their experience in finals should put them in good stead.

It really is a minor miracle that the Scorchers have done as well as they have. They haven’t been able to play a home game due to border restrictions and are unlikely to be playing any games in Western Australia in this tournament.

In the only match of the tournament they lost, it was the toss that threw them off. The Thunder chose to bat first and put the scoreboard pressure on. The Scorchers should be able to learn from this though and find a way to win while chasing.

One major issue for the Scorchers is the two players that will be missing due to COVID restrictions as well as major players Mitch Marsh and Josh Inglis who are both now with the Australian squad. The second tier of Scorchers players will now need to stand up.

Colin Munro has been the big hitter for the Scorchers, he smashed a huge century to go along with his 308 runs at an average of 61.60. AJ Tye has been incredible with the ball even though he was taken out of the attack against the Thunder due to bowling too many waists high full tosses, he has taken 13 wickets at 15 so far.

The Scorchers do have some obstacles to overcome, but with such a good start to their campaign, they should be able to make finals and push further from there.

Edge of the Crowd is going to bring you all of the Big Bash action with daily match reports. Make sure you are following us on all of our platforms to stay up to date with all the action.