The Australian Open Flops Into The Metaverse

I attended the Australian Open this year through Decentraland, a “metaverse” where players can meet online, explore digital worlds built by community members and trade in NFTs and virtual property. Instead of finding a kind of community, however, I found a void. 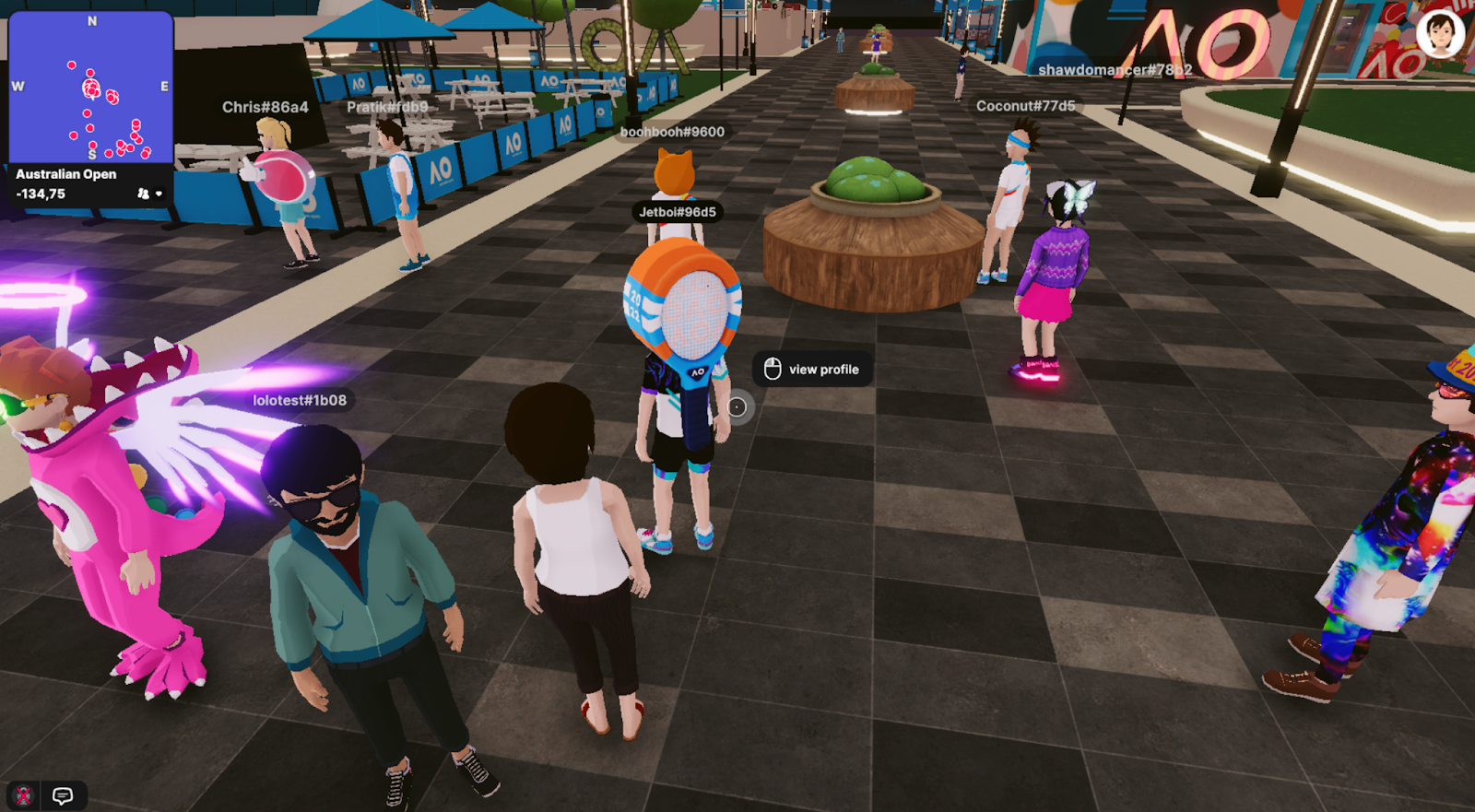 I attended the Australian Open this year through Decentraland, a “metaverse” where players can meet online, explore digital worlds built by community members and trade in NFTs and virtual property. Instead of finding a kind of community, however, I found a void.

Entering the virtual Rod Laver Arena, I found myself on a tennis court, holding a tennis racket. A window popped up, teaching me how to play a mini-game to hit balls flying from a machine sitting on the other side of the court.

The real purpose of this virtual arena seemed to reveal itself, since, – even here – the ads decorating the real Rod Laver Arena persisted, encircling my avatar.

The metaverse underlines the commercial rather than the communal. And the Australian Open event was no exception

Care had been put into designing food stalls to litter the grounds, standing eerily empty, with their only purpose to emulate the real thing.

An AO merchandise shop sat just outside the arena. But it was unclear if this was for decoration or if the polos, hats, shoes, and other items could be purchased for my avatar.

I’d loaded into Decentraland as a Guest, so even if these gimmicky promotional items could be bought, this option wasn’t available to me.

Without an NFT wallet, I was no-one. But, I think, so was everyone else.

Within the grounds of the virtual Australian Open, users mostly stood around, inactive or bugged out, adorned with collectible NFT garments.

Others were attempting to complete an in-game challenge by collecting ten rackets hidden on the grounds to receive a surprise reward. I found all ten rackets!

And then nothing happened. This may have been an issue with my NFT wallet-less-ness, but it wouldn’t surprise me if this was just another bug.

Screens, which I assume were intended to show clips and live footage of the tennis being played, remained ghostly white. Despite the small size of the map, areas were often slow to load, only adding to the non-place of it all.

Decentraland is increasingly becoming the place to hold NFT parties and raves.

At the close of the AO event on Decentraland, DJs with massive followings, such as Steve Aoki, played music as virtual bodies stood around, plastic and awkward. Metakey, a gaming NFT, claimed on Twitter that it was a “huge party”, and yet, there were few people present, making even the relatively small world of the virtual AO look giant.

Virtual worlds have existed long before the metaverse. I grew up on Club Penguin, Neopets, Animal Crossing, and Poptropica.

The virtual connection I felt in these worlds was always tainted by commercialisation – Club Penguin had a paid membership that almost created a class divide, and Neopets had a black market – but at least they were fun, as well as functional.

Even that thin veneer has fallen away in this virtual AO, revealing the monotony of the metaverse.

RIDDLER TAUNTS FANS IN PROMOTION FOR THE BATMAN

FROM RUNNERS UP TO CHAMPIONS, KREJČÍKOVÁ AND SINIAKOVÁ WIN FIRST AUSTRALIAN OPEN TITLE

Fortunately, the Decentraland AO event ended on the 31st of January, in conjunction with the end of the real Australian Open. Unfortunately, it looks as though it will be back again, stronger than ever, as Tennis Australia’s NFT & Metaverse Project Manager Ridley Plummer expressed enthusiasm in further developing the Australian Open metaverse:

Tennis Australia’s approach to the virtual platform should not be via NFTs and the metaverse, whose aim is to make money, but instead to underline accessibility and the importance of the social in enjoying a sporting event such as the Australian Open.

There was so much excitement generated this year around theSpecial K’s chemistry on court,andAsh Barty’s incredible championship win; that same electric atmosphere should’ve been reflected in the virtual landscape. Instead, virtual bodies stood around, silent and still, occasionally glittering with NFT-purchased wearables.

Inside Decentraland, what I saw was not an accessible platform where I could feel connection, but rather a janky landscape of stiff and alienated avatars.