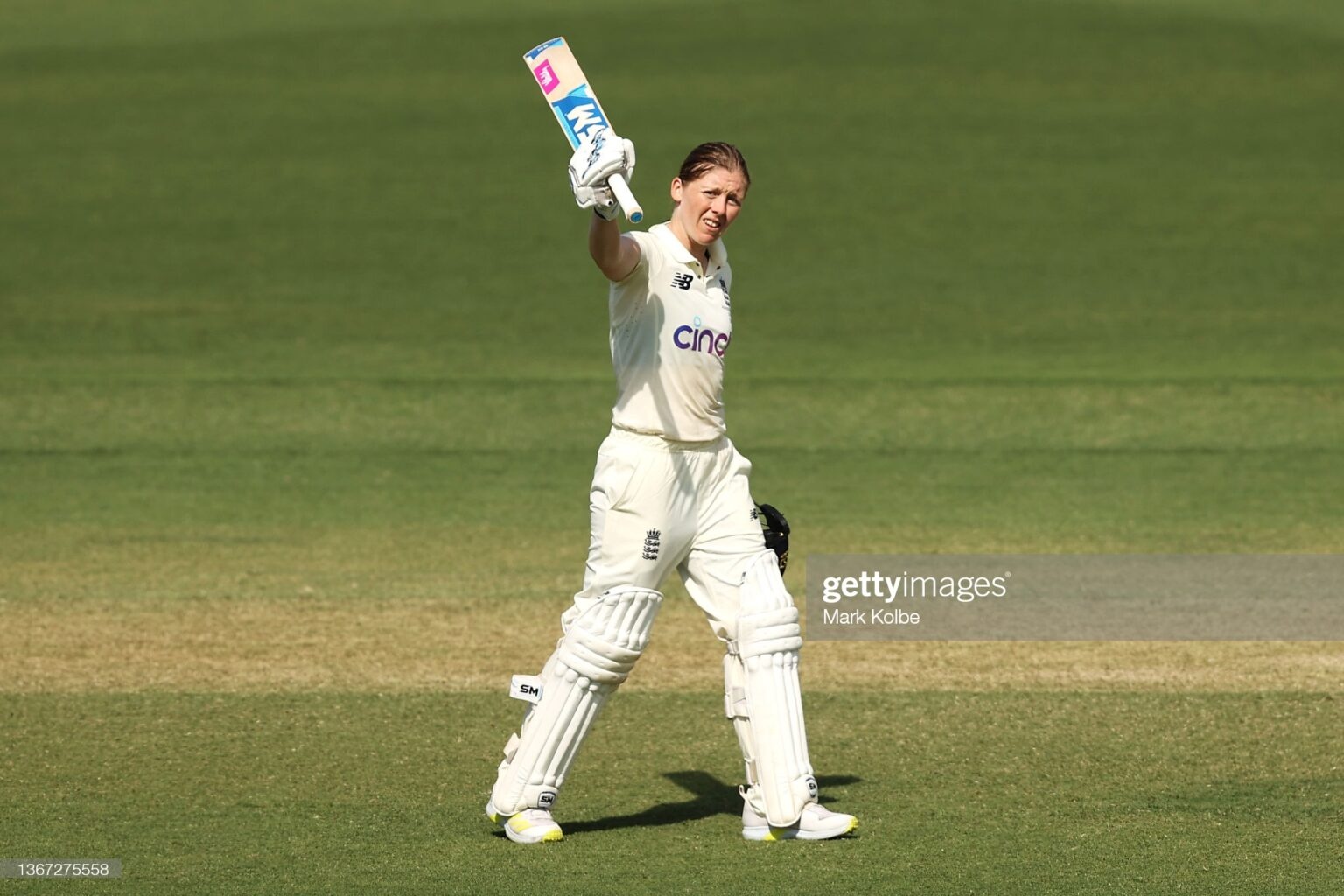 Australia sets itself up for victory despite some Heather Knight magic

After declaring earlier in in the day, and despite a Heather Knight century, Australia bowled well as England still trail by 102 runs after Day Two of the Women's Ashes Test.

Australia sets itself up for victory despite some Heather Knight magic

After declaring earlier in in the day, and despite a Heather Knight century, Australia bowled well as England still trail by 102 runs after Day Two of the Women's Ashes Test.

Australia has put itself into a winning position via some tight and effective bowling putting England under pressure throughout the day. Despite a century to Heather Knight and there being plenty of wet weather around in the next couple of days, Australia has given itself the best chance of winning the four points and securing a win in this Test match.

"I think we did well, it would've been nice to take all 10 wickets but everyone chipped in well", she said.

Australia started the day continuing on with the bat from the night before with the score on 7/327. It was Jess Jonassen who walked out with Annabel Sutherland trying to push the score towards 400 but it wasn’t to be with Sutherland going for only eight.

Alana King then joined Jonassen at the crease but the pair only put on nine together before Jonassen was caught behind. The declaration then came from Meg Lanning with the score on 337.

Katherine Brunt finished off what will likely be her last Ashes Test in Australia with a five-wicket haul, picking up both wickets in the morning. She really was the standout, finishing with figures of 5-60.

"It was about coming out this morning and not letting them add too many to the total," Brunt said after play.

"I think for me it had to be a good ball to dismiss Annabelle and luckily it worked out.

"We don't often get to play in conditions that have something for the ball and I'm happy to have contributed this time."

Australia then set about trying to bowl the English out for under the follow-on target which would’ve given them the best opportunity of winning this match.

It didn’t take long at all for the wickets to start falling as Darcie Brown (1/39) dismissed Lauren Winfield-Hill (four) with her extreme pace and bounce. While the ball didn’t swing as much for the Aussies as it did for the English, the extra pace from the Aussie bowlers was certainly a standout.

"She is a raw talent with raw pace and you see how much energy she has in the field. It speaks volumes of the team how good our depth is," Perry said.

"We have a lot of good things going forward and it's exciting to see how Darcie is doing."

Heather Knight (127*) and Tammy Beaumont (five) then dug in for a little bit, but Ellyse Perry (2/35) managed to strike, trapping Beaumont in front. A lot of talk in the media over the last couple of weeks has been about Perry’s place in the side but with the red ball, she offers so much with both bat and ball.

An obvious difference between the two sides with the bat has been the run rate. Australia took the attack to the English bowlers with a run rate of 3.23 across its innings where England is only striking at 2.50 runs per over. Perhaps if England looked to put more pressure on the bowlers the wickets wouldn’t have fallen so consistently.

That being said, it’s hard to do when wickets fall so consistently. It was only 14 overs later when Nat Sciver (15) was out hitting one through to the keeper in Healy off the bowling of Sutherland (2/52). Wickets seemed to fall consistently with a batter departing every 10 overs or so.

Sophia Dunkley (15) has clearly come a long way over the last 12 months, but she was the next to go after getting a good start. However, Heather Knight continued to push away and poke her head out as the best of the batters getting her way to 50 from 130 balls including six boundaries and a big six.

Wickets then fell more consistently as all the bowlers except Tahlia McGrath (0/27) chipped in with at least one wicket. It’s fair to say McGrath didn’t have a great day with the ball; also being the most expensive of the bowlers at 4.50 runs per over.

Katherine Brunt (one) went cheaply, giving Alana King (1/43) her first Test wicket, getting an LBW with an excellent leg spin delivery. King was incredible all day, bowling with huge spin deciding many of the batters fates. At points, she was too wide, but it did draw the English batters into wafting wide outside off just as many of the male batters did throughout its Ashes series.

"I think Annabelle Sutherland bowled really well and it was nice to see King get a wicket as well, it was a good day for us", Perry said.

Test debutant Charlie Dean (nine) was the next to go from the bowling of Ash Gardner (1/27) before Anya Shrubsole also was out to spin, this time it was Jess Jonassen.

Jonassen was incredibly accurate with the ball, but it did take until Australia was 60 overs in before she got a bowl. At some point, Australia needs to find a balance that isn’t just 10 all-rounders because at the end of the day not everyone can be given the opportunity to both bat and bowl. Some more specialist bowlers might be the way to go forward with this team.

Heather Knight continued to resist against the Aussie bowlers with her strong defence and excellent touch shots. In particular, the paddle sweep brought her plenty of runs including guiding her way through the 90s and then bringing up her century.

Perry was quick to compliment Knight after play.

"She's led exceptionally well and it was a classy gritty innings from the English captain," she said.

"She's a wonderful player and it was great to watch, it would've been nice to watch but today was an important innings for her team."

Her 100 came off 213 balls with ten boundaries and the one six. The century is Knight's second in Ashes contests, making her only the sixth person in women's Ashes history to hit centuries in both home and away conditions.

Her innings was incredibly impressive with the next highest score being only 27. She was the Joe Root of this English team with no other batter sticking around to help her. She also made sure to stick around after the century to push England past the follow-on target meaning that Australia will need to bat once again.

Towards the end of the day, Sophie Ecclestone (27) took some fight to the Aussies at the number 10 position, getting herself the second-highest score of the day for England. Heather Knight also pushed through the day taking on the new ball late in the day.

The partnership of the ninth wicket also passed 50 as England took the game away from Australia slightly. While the match is still comfortably in Australia's favour, the partnership of Knight and Ecclestone taking the lead down from more than 150 to just over 100 will give England some confidence going into a couple of days of rain.

In the final over of the day, Heather Knight passed the record for the highest score of an English batter in Australia. She passed a record that has existed since 1949 as she took advantage of the bowlers late in the day.

Katherine Brunt spoke after the days play about Heather Knight.

"She has a lot of fighting spirit and is 100% a leader, if you want to lead by example that's how you do it," she said.

"None of us thought she wouldn't go out there and not do it, we all knew she could and this level of batter is built for it."

Brunt went on to speak about the goals for tomorrow.

"We set out to win, if we took our opportunities we would be in a better position," she mentioned.

"The fight that we are showing, should tell how much this means to us. We will look to reduce the deficit and go out to fight like hell later on."

"We will look to advance the match, crucially we need enough time to take another 12 wickets. Time is the biggest thing I think we will need at least a day. but with the pitch, there still seems to be a bit in it", Perry told.

With plenty of inclement weather around over the next couple of days, Australia is going to need to score quickly before taking ten more England wickets to secure the win. With the current series locked in at 4-2 in favour of Australia, the four points in this Test would push Australia to eight securing them the Ashes series once again.

England finished the day 8/235, 102 runs behind Australia. Play is set to begin once again tomorrow at 10am from Manuka Oval in Canberra.