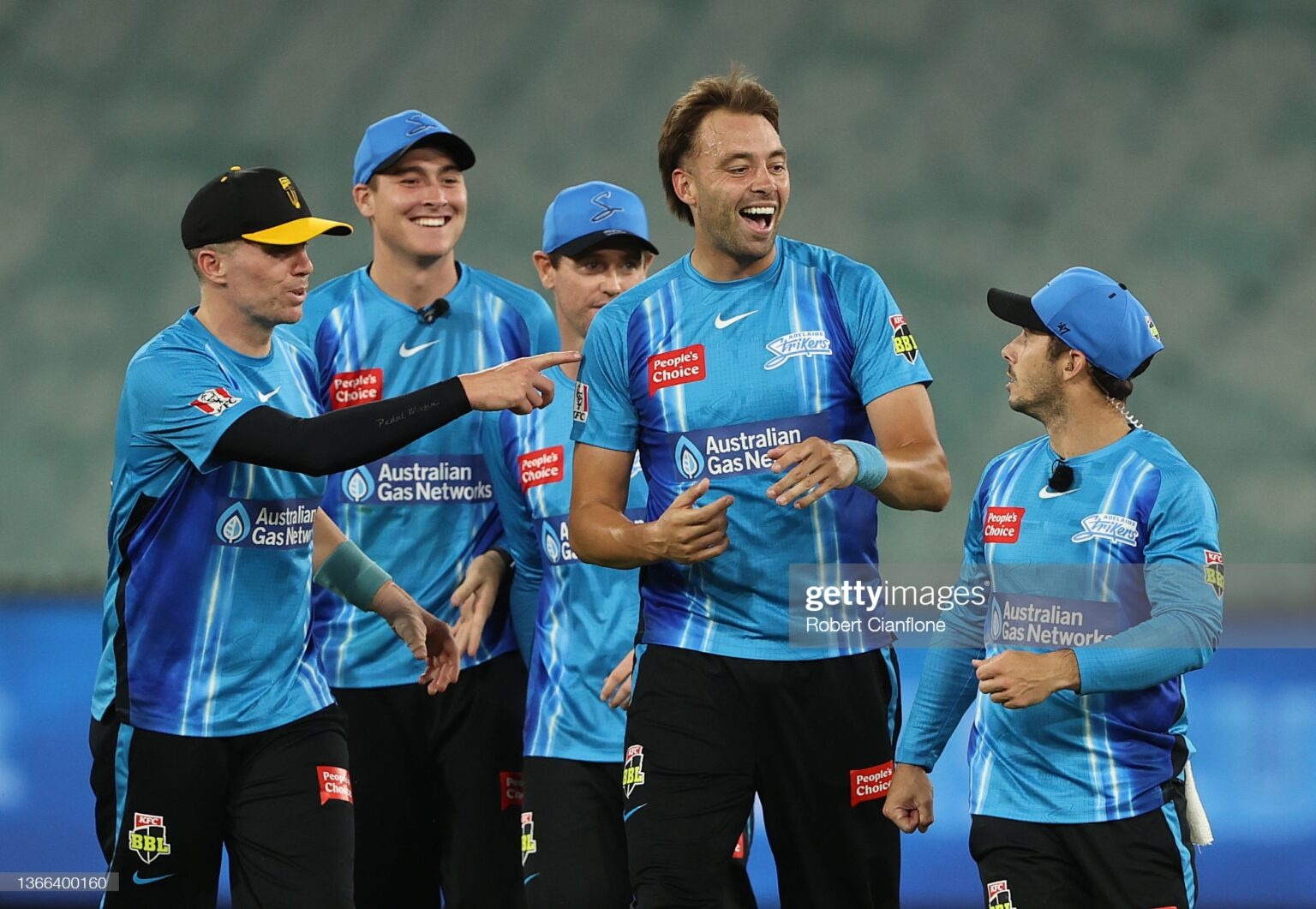 The Adelaide Strikers managed to squeeze home a win to secure its tickets to play the Sydney Sixers, the winner of which makes the BBL|11 Final.

The Adelaide Strikers managed to squeeze home a win to secure its tickets to play the Sydney Sixers, the winner of which makes the BBL|11 Final.

It was Mark Holden on Australian Idol who used to say, ‘you’re going to Sydney’ and now that’s what the Adelaide Strikers will be hearing after disposing of the Sydney Thunder in The Eliminator final. The game came down to the very last ball as Harry Conway bowled his side to victory with the Thunder needing 14 from the final six balls.

Everything started well for the Strikers who won the toss and chose to bowl as they love to do. The Strikers were hoping to set a big score and push themselves to continue a hot streak and win six games from their last six matches. Matt Short combined with Alex Carey early once again to push the Strikers to a great powerplay score.

The pair combined for a number of important twos as well as often finding the boundary and clearing the pickets to post 40 from the first four overs. However, it wasn’t too long after that period that Alex Carey hit one into the legside with Daniel Sams taking one of the best catches of the summer. It was sweet relief for Sams who had dropped Matt Short in the over before.

Man of the Match Ian Cockbain then came to the crease and consistently found the boundary with some of the sweetest timed shots you could ever see on the MCG. He combined with Matt Short to push the score to 85 at the 10 over drinks break. Once again though, after a break, came a wicket as Short missed a straight one trying to sweep a Jason Sangha flipper.

While Cockbain continued along his merry way, things slowed dramatically for the Strikers. Firstly, it was Travis Head going for only three then Cockbain went in the 16thover, then, only four balls later, Jono Wells was gone. We saw in the last match that losing clumps of wickets is the problem for the Strikers and they didn’t manage anything different tonight.

It then got to the death overs without any real set batters. Matt Renshaw and Thomas Kelly pushed the ball around often finding a quick two but couldn’t clear the boundary which would’ve moved the score closer to 200. In the end, Thomas Kelly went with one ball to go with the Strikers posting 6/184.

Tanveer Sangha was once again the best bowler for the Thunder continuing his amazing BBL|11 season. He bowled his four overs for figures of 2/15, going at only 3.75 when every one of the bowlers went at more than eight, it is simply incredible.

SCORCHERS BURN THE SIXERS TO BOOK A SPOT IN THE FINAL

Being set 185 to win was never going to be easy for the Thunder but it looked like they were on track from ball one.

Usman Khawaja and Alex Hales went big early, putting on 15 runs from the first two overs but eventually, Hales mistimed one off the quick Henry Thornton with Peter Siddle taking the catch. The Hales wicket was huge but it did bring Jason Sangha to the crease who is in the form of his life having really taken the step to the next level of his game.

He and Khawaja combined for 41 through the rest of the powerplay before Khawaja was out to a contentious catch, top-edging a cut shot to Fawad Ahmed at third man. Khawaja thought it was grassed but Fawad believed it was a catch. In the end the third umpire went with the on-field soft signal and Khawaja had to go. That brought in Alex Ross who combined with Sangha for an almost match-winning partnership.

The pair mostly pushed the ball around the ground for quick twos which frustrated both the Strikers players and fans. It wasn’t just a touch game though with both men often finding the rope. The game almost went away with these two at the crease with WinViz eventually having the Thunder favourites with five overs to go.

Unfortunately, it was with only four overs to go when Jason Sangha was out to Peter Siddle who hadn’t had a great performance with the ball up until that point. It was the start of the power surge which meant the big hitter of Daniel Sams was to come out, but he also only lasted a couple of balls going in the same over to a very straight LBW.

Ben Cutting was the next man to come in and went big straight away, pulling Harry Conway behind square for four. At that point, the required rate went below 12 and the Thunder looked in the box seat. Conway finished off the over well though with a combination of slower balls and good length fast balls that the batters couldn’t get under to put over the rope.

There was two overs to go and Peter Siddle brought himself on to bowl the penultimate over. He started with a perfect yorker before giving Cutting one that he could get under putting it over mid-wicket for four. It then meant there would be 14 required from the final over for the Thunder with Harry Conway set to take the ball.

He couldn’t have done any better, with the ball in the right spot almost every time. While there was one boundary meaning there was nine to get from the last three balls Conway then put his wicket-taking hat on. Conway took the wickets of Alex Ross and Ben Cutting in quick succession to seal the game for the Strikers in what was one of the most tense games of the season.

Alex Carey spoke post-game about how good the match was and how important Harry Conway is.

“It was one of the matches where the crowd and the people at home are happy a real close one," Carey said.

“Conway looked calm and bowled well in the Surge and backed it up in the last over.”

“I’ve had a lot of good people around me, and Alex Carey was awesome. I haven’t had an opportunity like that so I’m really happy with the result," he mentioned.

“I was extremely nervous, but I had Siddle at cover and I backed my execution, and it’s lucky that the first catch was taken.

“I’ve got to use my brain somewhat and I rely on my variations and Jono Wells is going to cop it for the next week.”

The catch of Alex Ross was one of the better of the summer as Thornton and Carey collided in the deep attempting to catch the ball. Luckily no one was injured but more importantly, the catch was taken. Alex Carey spoke on the catch post-game.

“I thought I got called in, lucky he caught that because if he didn’t it would’ve been eight to get with three balls. He’s a bit bigger of a unit than me as well", he recalled.

Conway was on a hattrick with the last ball, but it wasn’t to be as a diving Jono Wells put the ball down much to the disappointment of his teammate. While tight, it was clinical from the Strikers who managed to close out the game in a way they didn’t manage to for most of the season.