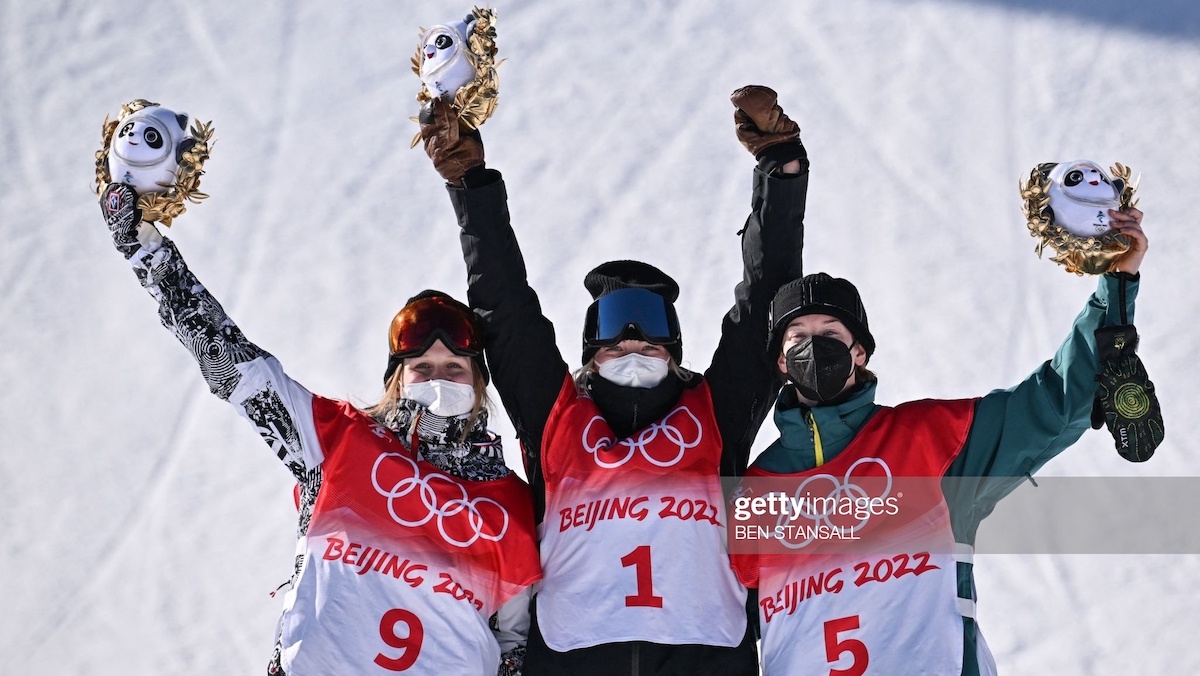 She was joined on the podium by one of her best mates Zoi Sadowski Synnott, who won New Zealand's first Winter Olympic gold medal with an incredible third run, and American Julia Marino who was relegated to Silver by Sadowski Synnott's final run.

It was a fairytale finish for the Australian, who experienced devastation in Pyeongchang when she was unable to compete after an injury in training.

The tears were flowing around Australia for Coady and "adopted daughter" Sadowski Synnott, who graced the podium together - the first time in Winter Olympics history that there was an Australian and a New Zealander on the same podium.

Speaking after the podium success, Coady was quality on the microphone as usual, absolutely "hyped" with her runs today and "hyped" for her competitors as well.

"Making it to a final is always a win in my books. Last night I was chatting to a friend and she said to me that I finally earnt my ticket to freedom, with the last four years, and I just really took that mentality today," Coady said.

"I'm just going to send it, nothing to lose. I came back, I got my redemption yesterday and today I just wanted to have the best time, enjoy it the most, and just send it."

And send it she did.

Qualifying eighth and therefore starting fifth in each run, Coady opened with a really clean run that put her right in medal contention from the get-go.

Nailing the rails, as she so often does, her first jump was a switch back nine, which she landed nicely before the backside seven and the frontside double nine.

The run scored really well too, her 82.68 took her straight to the top of the standings, which survived until the final boarder - first qualifier - Sadowski Synnott put down an 84.51 with huge jumps in her opening run.

On her second attempt, Coady went for similar tricks through the rails section and hit the switch backside nine and backside seven, and on her third, she went bigger but just missed the landing.

Going for the frontside double 10, adding an extra 180 to her first run jump, she seemed to over-rotate a little on the landing and took a little fall.

A massive run from American Julia Mirano catapulted her up to number one, an 87.68 was the best score of a female snowboarder this season and put the pressure on Sadowski Synnott and Coady to pull out bigger tricks and return to the top of the podium.

With her final chance to put down a medal-winning score, Coady started with a solid rail section and once again landed her switch back nine and backside seven making it look way easier than it really is.

Coady went for the frontside double 10 again and this time she stomped the landing, nailing the run for an 84.15.

It was a nervous wait for the 21-year-old, who had to hold her breath waiting for the five remaining competitors to stay below her and therefore hold onto Bronze.

Mirano was unable to top her 87.68, so she too waited at the bottom of the run with Coady, as the likes of champion Jamie Anderson, Austrian rider Anna Gasser and second-placed qualifier Kokomo Murase took on their final runs.

It was a disappointing day for some of the favourites, who could not stick their landings and were unable to sneak onto the podium.

However, with every fallen rider and every score lower than Coady, Australia quietly celebrated being one step closer to its first medal of the Games.

With her 84.15 securing Bronze, it was down to the final rider Sadowski Synnott to decide the top two medals. Sadowski Synnott had a strong rail section and stuck her final jump for a huge score of 92.88, enough to take that step up to Olympic Champion.

BEIJING 2022 DAY 1 ON SNOW: ELATION AND HEARTACHE FOR AUSSIES ON THE MOGULS

The camaraderie of the sport was on full display at the end of the final run, with Mirano the first to run over and pile on Sadowski Synnott.

Best friend Coady was right behind, as all the top 12 competitors joined in on the celebrations.

"I love those girls so much, we're so all so tight," she said after the race on the broadcast.

"It's pretty crazy in this sport, it's not like a lot of other sports where there's a lot of crazy rivalry. Yeah everyone is competitive, that's just the nature, but there's nothing better than seeing someone land a good run...

"Zoi, she's one of my best mates and I'm just so, so incredibly hyped for her. She deserved that win so much."

Watching her competitors finals runs was as nerve-racking as it got for Coady today, the wait to see scores in front of the television cameras a "cruel" experience.

"That was cruel, that was so mean. They get you to stand in front of the camera...

"I was hoping they would bump me a couple more points and then I'd be feeling a little bit safer, but watching Anna come down, watching Kokomo come down, I was like 'I'm proud of my run'... I can't believe it held, I'm so hyped."

Just four years ago, Coady experienced heartbreak as a 17-year-old at Pyeongchang, blowing her ACL on a training run and ended her Olympic dream before it even began.

This Olympics, she not only made it through qualifying, but made it on the podium, and the learnings of the last four years certainly helped her do.

"It's crazy doing this kind of tour when you're a teenager and it's pretty easy to get to this big stage and think you're a rockstar, and that kind of happened - I became complacent and stopped working hard.

"That was totally the kick up the arse I needed to just get to work, and in that whole year I saw everyone getting so much better than me and when I got back on snow, there was no excuses from there, I was just like 'I have to work my arse off and just send it'."