Adelaide punk/rock duo Teenage Joans has released its first taste of new music in almost a year with 'Terrible' as the band sign to a new record label, Domestic La La. 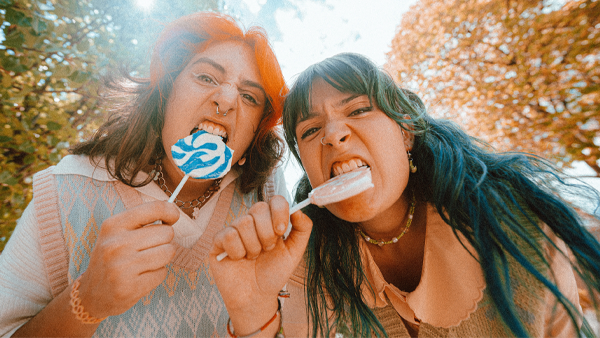 Teenage Joans has released its latest single and music video forTerrible, as well as announced signing to a new label, Domestic La La.

Punk rock anthemTerrible, with a hard-edged melody and loud distorted riffs, sees the release of the South Australian duo's first taste of new music in almost a year, since its debut EPTaste Of Mein May.

Teenage Joans, consisting of vocalist and drummer Tahlia Borg, and vocalist and guitarist Cahli Bakers, on speaking about the new track, the duo said the song was made up of a lot of different directions and influences and that it had been in the works for a while.

"Terribleis our first single since the EP, and we wanted the show the world a different side to Teenage Joans. We're both influenced by a range of music, including punk/hardcore, so we really wanted to write a song with a heavier touch," the band said.

"The song is about being led on by someone who "holds you like they're gonna drop you" - aka sticks around when it's easy and leaves as they please.

"We actually wrote the original version ofTerriblebefore we wrote most ofTaste Of Me, but we didn’t feel like it was good enough to release at that time. We rewrote it a second time at a band practice in April 2021, and then a third time when we went into the studio in September 2021. The song is almost entirely different now, apart from the ending which has stayed the same since we first wrote it!”

As well as the release ofTerrible, Teenage Joans has announced it has signed to Domestic La La, a record label run by James Tidswell of Violent Soho, who said it was a pleasure to have the duo as part of the label that also boasts the likes of Dear Seattle, Teen Jesus and the Jean Teasers and West Thebarton.

“I loved Teenage Joans from the moment I heard them and then seeing them live absolutely blew me away. It is an honour to have them as part of the Domestic La La family and I cannot wait for everyone to hear their brand new song "Terrible," the scream at the end is the BEST!!!!", Tidswell said.

The band's second singleThree Leaf Cloverwas the winning song in Triple J's Unearthed High competition in 2020, with the duo having received multiple other awards over the years including South Australian Live Act of the Year at the 2019 National Live Music Awards, and six awards at the 2021 South Australian Music Awards, including Best Group, Best New Artist, Best Punk Artist, Best Release (forTaste Of Me), Best Cover Art, and Best Song (forSomething About Being Sixteen).

Following the release ofTaste Of Me, Teenage Joans played two-sold out co-headline shows with TOWNS, and had sets at Yours and Owls, NYE On The Hill, Summer Sounds, and Mountain Goat Valley Crawl, as well being the support act for Violent Soho, Ruby Fields, The Hard Aches, and Private Function.

More recently, in the past year, the band has supported other artists such as Sly Withers, Bugs, Amy Shark, and The Chats, as well as played festival slots at UNIFY and Land of Plenty.

Teenage Joans will be supporting Ball Park Music's The Weirder & Weirder Tour in June and July, before playing Spin Off Festival.

You can find details about Ball Park Music's tourhere, and Spin Off Festivalhere.