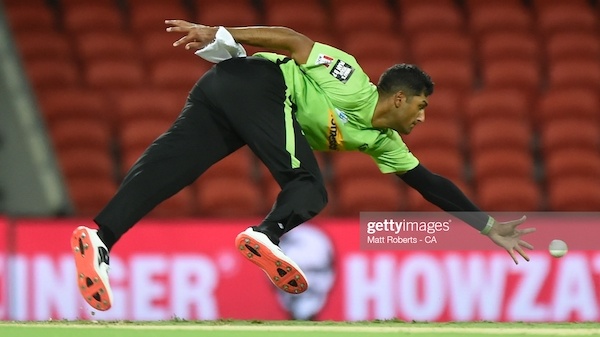 To end a bumper day of cricket on the east coast of Australia, the Perth Scorchers and Sydney Thunder faced off in another match that was missing key players quarantining with Covid-19.

After two overs, rain forced the players from the field at Metricon Stadium and as a result, both teams lost two overs.

Speaking on the Fox Cricket broadcast through the delay, Scorchers' bowler Andrew Tye was happy with the start from his opening batters before the rain hit.

"[It's a] great start by us, really proactive by Bangers (Cam Bancroft) and KP (Kurtis Patterson) there, getting us off to a bit of a flyer," Tye said.

"Happy that we’re off to that start, but hopefully the rain can stay away and we can get some more cricket playing.

"I think it’s just going to be one of those nights, it could be a bit stop-starty. Hopefully it stops more than it starts, but just one of those frustrating nights as a bowler that hopefully you don’t have to warm up five times, you only have to go once or twice."

It was a slow moving first over back after the rain had clear, and then Sandhu picked up his first wicket for the night, Patterson mis-timed his drive and was caught by Cutting at extra cover.

Bancroft and Colin Munro started to find their rhythm, and put on a 28 run partnership before the Thunder started to roll.

The long-distanced hi-fives were out as Chris Green picked up the big wicket of Bancroft, caught off a reverse sweep struck straight to the fielder at backward point.

Sandhu then took a second wicket, courtesy of Cutting's safe hands again, Munro sent back to the dugout for 18.

A few overs later, Sandhu completed a hat-trick, his third personal hat-trick and the seventh ever in the BBL.

The wicket of Munro off the final ball of his third over was followed by Aaron Hardie departing for just five runs, and then Laurie Evans (20 off 18).

Wickets continued to tumble for the Scorchers in the final two overs, with Ashton Agar the only lower order batter to hit a double-figure score.

Matthew Gilkes and Alex Hales started in impressive fashion, Gilkes smashing two boundaries and a six from the first over.

The pair continued to take the Scorchers' bowlers to the rope, but some magnificent fielders such as this from Munro to save the maximum.

Andrew Tye got the breakthrough for Perth, taking Gilkes caught and bowled after the batter popped the off-cutter up. Gilkes departed for 32.

Jason Sangha joined Hales out in the middle and picked up where Gilkes left off, running quick twos. The young batter hit his straps at the 10th over mark, hitting his first six into the stands.

Hales was finding runs, but not with the ease of his batting partners. Tye saw his opening and drew the false shot from Hales, which was caught at deep point by Munro.

Shortly after, Matt Kelly executed a brilliant yorker that bowled straight through Sangha. Dismissed for 34, it was an untimely wicket for the Thunder.

Ollie Davies joined Sam Billings in the middle, who was playing in his final match for the Thunder before he returns to England, and the pair were patient, but attacked the bad balls to keep taking runs off the target.

The rain returned at a critical time in the match, with just three overs remaining, but the players stayed on the field to see out the overs.

Perth had a huge chance to take the wicket of Billings with Bancroft camped underneath the skied cricket ball, but he let it fall through his hands.

The dropped catch, a waist-high full toss smashed for six and then a misfield was not the finish Perth was after. It stole a wicket, Davies run-out when his bat got stuck in the pitch, but it was otherwise a lacklustre final few overs.

Billings ended his campaign with a four to secure the win for the Thunder, a six wicket win in the end.

Sandhu was named player of the match, his 4/22 key to the victory tonight, but the bowler had no idea he'd bowled another hat-trick.

"I literally had no idea... It's awesome, great feeling to get another hat-trick this year."

"It was probably best I didn't know, because I probably would have bowled a different ball, but awesome to contribute to a win," Sandhu said on the broadcast post-match.

The Scorchers will look to bounce back against the Sixers on Sunday in Coffs Harbour, while the Thunder travel to Tasmania to play the Hurricanes on Monday.