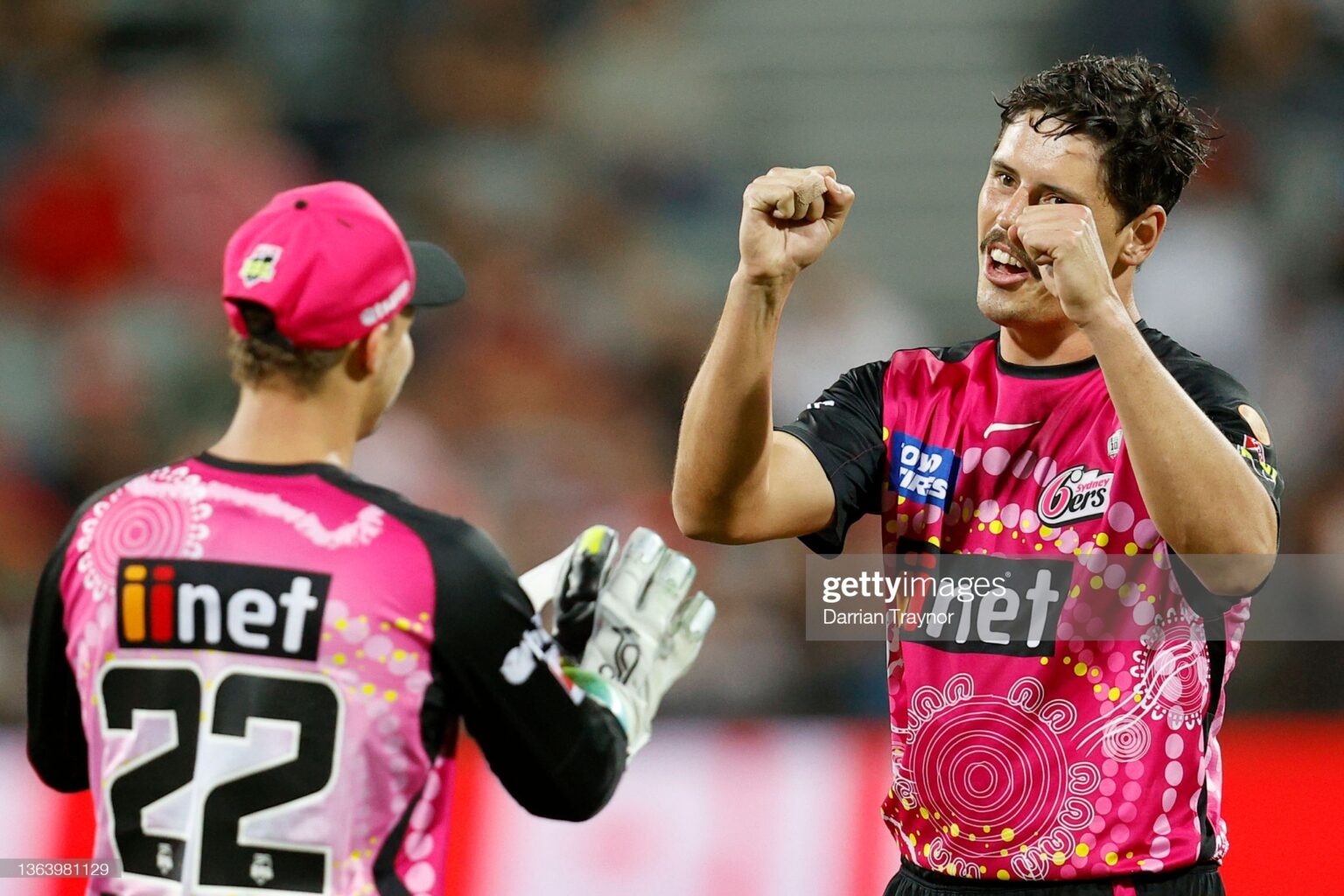 A five wicket haul for Ben Dwarshuis helped the Sydney Sixers get a convincing win over the Melbourne Renegades.

A five wicket haul for Ben Dwarshuis helped the Sydney Sixers get a convincing win over the Melbourne Renegades.

After a loss to Perth on Sunday, Sydney got some reinforcements, with the return of Moises Henriques and Sean Abbott to their side, after being out with COVID.

Despite losing the Toss, Melbourne got the momentum early, with Josh Philippe falling to Josh Lalor for his 3rd duck in the last 4 innings.

After coming into the game earlier than desired, Daniel Hughes brought some energy into the last overs of the powerplay, with a six off the final ball of the third over. The partnership of Hughes and Jack Edwards then continued for another 13 runs off the next over.

Some good bowling kept the Sixers to a moderate run rate, and also allowed the Renegades to take the wickets of Daniel Hughes and Jack Edwards, both with similar shots to deep midwicket, unable to find the power to get past the rope.

Moises Henriques, returning as captain after missing their last game, took a few deliveries to get set, before he and Dan Christian provided the Sixers with their biggest partnership of the night.

Henriques’ batting efforts were not rewarded with a 50 however, with him joining the list of Sixers to fall to the boundary fielder on 49.

After a camo from Shadab Khan, the Sixers found themselves trying to defend a modest total of 6-150.

“We thought we were 10-15 short with the bat, but the bowlers were able to go out there and take the wickets early.”

“Jack Edwards came out and played some nice shots, then Henriques finished it off like he has all year,” Ben Dwarshius reflected.

Jackson Bird and Sean Abbott provided the initial breakthroughs for the Sixers bowling attack, getting the wickets of the opener. These strikes restricted Melbourne to 2/22 at the end of the powerplay.

Ben Dwarshuis commented on the pitch after the match.

“The wicket was a little bit slow and tired so I knew if we could come out and taken some early wickets and build some pressure on the middle order we could bowl them out.

“The pitch was a little bit two paced, so it made it hard for the batters.”

Shaun Marsh, batting with Nick Maddinson and Mackenzie Harvey provided some resistance to the Sixers’ plans, Maddinson lasting until the seventh over and Harvey until the 11th but could not save their team.

The Harvey wicket was the beginning of the end for Melbourne, as Ben Dwarshius, managed to take two wickets in the 14thover, to send Melbourne into a batting collapse.

From here, Melbourne was unable to keep partnerships together, as Dwarshuis, alongside Sean Abbott, expertly cleaned up the tail, bowling the Renegades out for only 105.

This continues a nightmare season for the Renegades, who have won only 3 out of 11 games, and their second straight game of being bowled out for a disappointing total.

The Sixers however, keep on pace with the Sydney Thunder, as they aim to remain competitive for the top spots on the ladder.

“If we keep getting the runs on the board and then bowling like we did tonight we will be in good stead.” Dwarshius summarised.