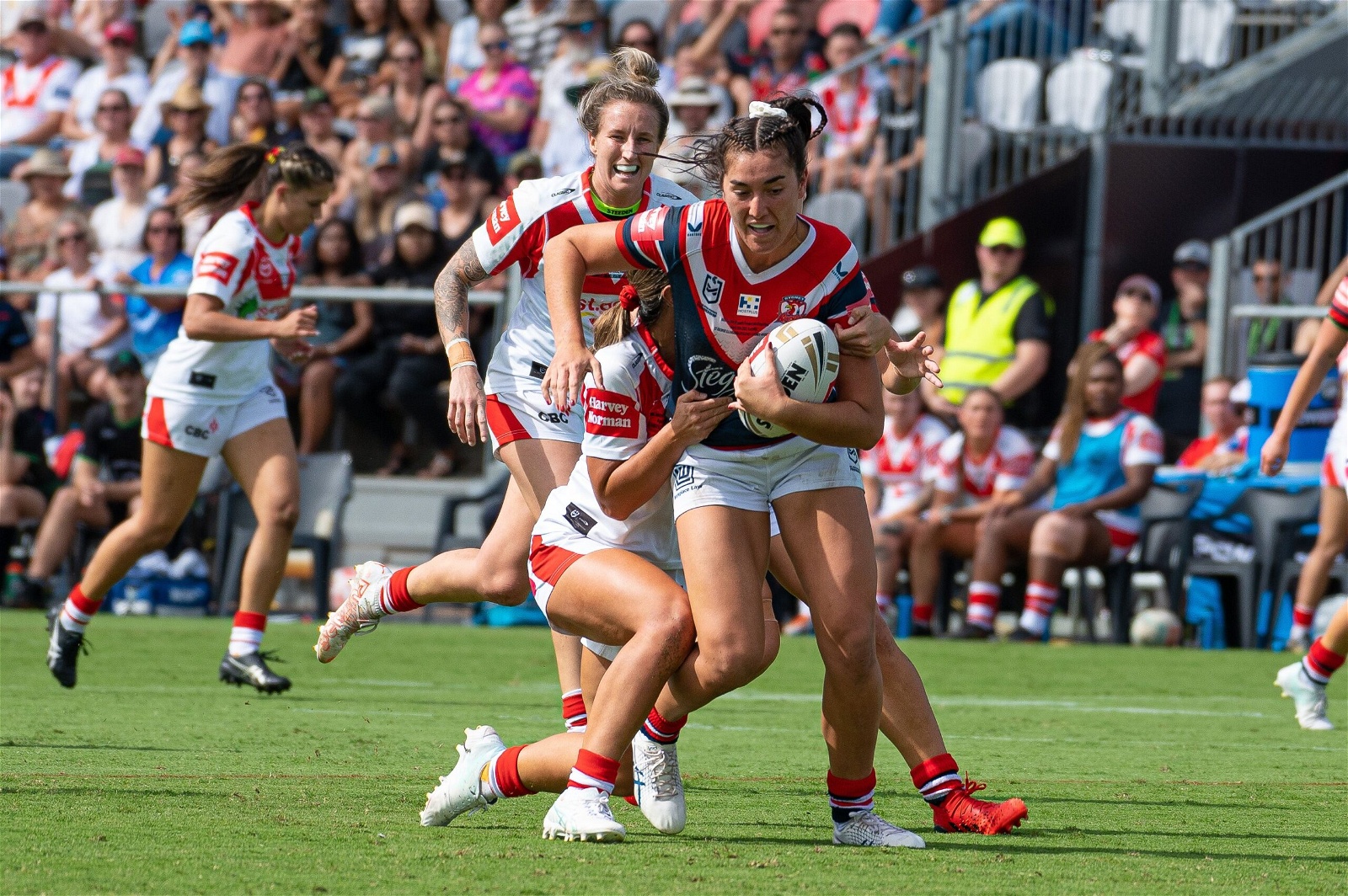 They say 'third time's a charm', and the Sydney Roosters did just that winning its first NRLW Premiership after two previous appearances.

They say 'third time's a charm', and the Sydney Roosters did just that winning its first NRLW Premiership after two previous appearances.

They say 'third time's a charm', and the Sydney Roosters did just that winning its first NRLW Premiership after two previous appearances. After a very slow start, they won the games that mattered, taking down the Dragons 16-4.

Sarah Togatuki, who was ruled able to play by the tribunal this week, picked up the Karyn Murphy Medal as player of the match.

Emma Tonegato provided the first highlight of the game, setting up Maddi Bartlett to become the leading all-time try scorer of the NRLW.

Some impressive runs from Bridie Parker almost allowed the Roosters to fight right back. She was, however, met by a tough Dragons defence, and taken out to touch before the try line.

This Dragons defence continued to protect the try line however consistently conceded penalties to give the Roosters many opportunities to score.

The defensive efforts prevailed and the teams returned to the lockers for a half-time score of 6-8.

Yasmine Meakes finally got the breakthrough for the Roosters, tying the game at 4-4 early in the second half after a pass from Jocelyn Kelleher. Zahara Temara missed the opportunity to take the lead with the conversion.

Temara quickly made up for her missed conversion. She connected with Isabelle Kelly for a Roosters try, then nailing the kick for a ten-point lead.

From here the Dragons were unable to find ways to score, before Olivia Higgins scored in the final 5 minutes, to put the score out of reach for the dragons.

Dragons coach Jamie Soward said he felt proud of his team despite the final score.

“[it] doesn’t feel great, but I’m proud of the girls that have bought in and set the standard and the culture of what it takes to be a dragon now.

“At the end of the day, the Roosters were the better team – they played smarter, they ran harder.”

Soward said that he will be going into his second season as a coach hoping for another shot at the trophy in the second season this year.

“It’s a tough journey to win a grand final, and maybe you need to lose one to win one.”

Roosters coach John Strange was also very complimentary of his premiership-winning side.

“The girls were just outstanding, so proud of them.”

Captain Corban Baxter, part of all four Roosters seasons, was relieved to finally come away the victor.

“We’ve been in a few grand finals and haven’t come up with the win, so today meant a lot.

“I hope strange is going to stick around and we get a good solid group of girls back as well.”

Baxter was also looking forward to the season and believed that the girls could be playing an even higher standard of footy in their next campaign.

“We’ve shown what we can do and I just think we’re going to get better as each season goes on.”

The Roosters had a very tough start to the season. They had to play both of their first two seasons with a severe shortage of backs. The most notable absence was captain Corban Baxter missing the side’s first two games.

From here, they proved resilient, taking the next two wins, and barely edging out the Eels for a place in the finals.

As heavy underdogs to the Brisbane Broncos, the Roosters pulled off the historic upset to earn them their place in the grand final.

Despite this season being over, 2022 has plenty more women's footy to come, with Origin, another NRLW season and also a world cup in October.