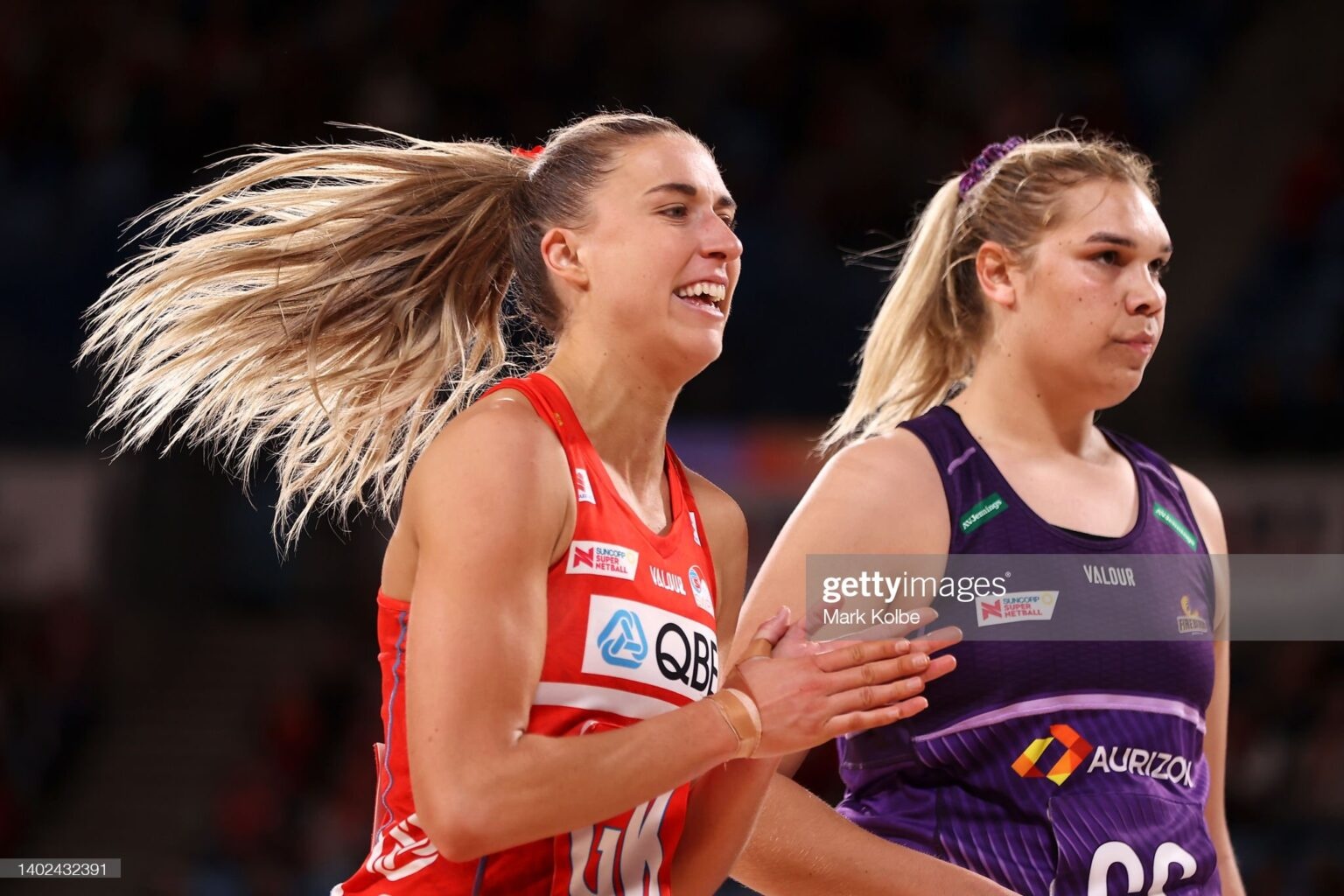 Swifts win a thriller over the Firebirds, but leave finals in the balance

The NSW Swifts have topped the Queensland Firebirds by two goals to give themselves a hope of finals, but their destiny is not in their own hands.

Swifts win a thriller over the Firebirds, but leave finals in the balance

The NSW Swifts have topped the Queensland Firebirds by two goals to give themselves a hope of finals, but their destiny is not in their own hands.

The NSW Swifts have given themselves a chance to make finals with a clutch win over the Queensland Firebirds, but destiny is not in their hands going into the final match of the season.

The Swifts had far from the perfect preparation, as coach Briony Akle, midcourter Tayla Fraser and defender Teigan O'Shannassy were out with COVID-19.

The Swifts started strongly, putting six goals on the board before the Firebirds scored, as Sarah Klau wreaked havoc in defence. Klau had three deflections, while Allie Smith had two gains in the first quarter, but the Firebirds fought back late to close the gap to three goals at the first break.

Bec Bulley, who stepped in to coach the Swifts was full of praise for both Smith and Klau after the game.

"Allie had a great performance last week. She came on and got some great intercepts. We always look at what is going to be the best team to combat the opposition - it's unfortunate for Tay [Fraser], she’s been training really well.

"Allie had an absolute blinder. She got some great intercepts around the circle, it was unbelievable.

"Sarah was amazing. She started so well, the ball wasn’t getting past her in that first quarter."

Despite the slow start, the Firebirds showed why they were also in contention for a finals spot, as they jumped the Swifts in the second quarter, as their defensive duo of Eboni Usoro-Brown and Ruby Bakewell-Doran disrupted the Swifts' attack.

The duo combined for seven deflections, five gains and two rebounds, as the Firebirds dominated the quarter and took a three goal lead of their own into half time.

Coming out of halftime, the Swifts changed their lineup, bringing Sophie Fawns into goal shooter, pushing Helen Housby to goal attack, and switching Maddy Proud and Paige Hadley in the midcourt.

The move paid dividends, as the Swifts found their fluency in attack.

Proud explained after the game just how much of an impact the changes had.

"Kelly started the game brilliantly and then I thought so was the decision to put Soph back into shooter and Helen to goal attack. Helen and I have played across that transverse line for a while now, os probably just gave the Firebirds something different to think about.

"I thought Paige came on and had a brilliant intercept in centre as well. Sometimes, just a little change, while it's not huge, just a little swap can spark something a little bit different."

Bulley was also full of praise for Fawns, as the 18 year old shooter played as if she had ice in her veins. Fawns finished with 14 goals, including two super shots from two attempts, in a key performance.

"Sophie is unbelievable. She lost her mum six months ago, she’s come from Wagga netball, straight into SSN, she hasn’t even played NSW Premier League season, so I think she’s doing a great job. She’s got a huge future ahead of her.

"She’s got so much potential and we’ve only scratched the surface with her. She’s come on in the last two games, under pressure, against quality opposition, and has just nailed her shots, and its great to see the smile on her face as well.

"Hopefully she can take a lot of confidence from today, and hopefully (if results go our way), she can take that into the finals."

Bulley was also quick to credit Akle, who has been heavily involved in the team this week, despite contracting COVID-19, including calling for the decisive change, swapping Proud and Hadley.

"She’s been amazing. It must be so hard for her being at home. This is her team, she’s been around these girls for four years now. She’s been really engaged, she’s been doing all the work behind the scenes and presenting it to the girls via zoom.

"She’s been great for Nat (Avelino) and I, she’s led the coaching staff. We all knew what we had to do, and she was even able to be in touch during the game which was great."

GIANTS SQUEAK PAST LIGHTNING TO SEAL HOME FINAL NEXT WEEK

For the Firebirds, the loss caps a season filled with so much promise, that has just unravelled a touch late in the season.

After a strong start, they were unable to close out the season with the win, which would have given them a chance to sit and watch tomorrow's match with anticipation. Instead, they will be left to wonder what might have been.

Firebirds coach Megan Anderson was reflective after the match.

"Two goals probably typifies the season - it was a really tight season, and anybody could have made the last couple of pots. Unfortunately, two goals were in it tonight and we didn’t quite get there, but there were plenty of other moments that we could have taken advantage of to make that final four.

"While it came down to tonight’s game, there were probably more moments throughout the season that could have put ourselves in a better position.

"We had a pretty rough trot on the road and we came back and finished the season really strong. I think we executed pretty well in a lot of moments and it was probably just a three-minute period towards the end of the third quarter that let us down and put us into chase mode.

"I'm just so proud of everything, individually and as a team, that we’ve achieved this year and the growth thats been had."

Anderson made just one substitution in the first three quarters of the match, bringing Lara Dunkley on for Jemma Mi Mi at quarter time, in part because of her connection with Gretel Bueta.

"I think we had Jemma on there to create some space, and utilise her speed to bring the ball down but we weren’t quite utilising that as we would have liked, so I brought Lara on to bring some steadiness and some strength in there.

"She connected really well with Gretel and opened up the attack end for us really well, especially at the back end of the second quarter where we found some nice space."

Bueta starred for the Firebirds today, as she has for much of the season. The star goal attack had 22 goals, 29 centre pass receives, and played a key role every time the Firebirds moved the ball up the court towards the attacking end.

The Firebirds coach also made a late substitution in the final minutes, bringing on two point sniper Mia Stower, as the Firebirds chased the result. She explained after the match the late decision to change the shooting mix.

"It was probably a game we could have won in the one point time, if we had consolidated on all of our turnover conversion earlier in the match."

Anderson also paid tribute to her defensive duo of Bakewell-Doran and Usoro-Brown, who kept the Firebirds in the match for much of the day.

"I think our defence end had a great back end of the first quarter and even into the second and third quarter," Anderson said.

"I think Eboni in particular was turning over lots of ball and creating havoc and Gab [Simpson] and Rav [Kim Ravaillion] really tightened on the centre pass there, but everyone put their heart and soul into this game and gave it their all, so I can’t ask for anything more."

The Swifts two goal win puts them level with Collingwood Magpies, but slightly behind in percentage. The Magpies play the Vixens tomorrow, and if they lose by more than three goals, the Swifts will make finals and will get to play against the Giants in Sydney in the minor semi-final next week.

That matchup would be a repeat of last year's grand final, and a chance for revenge for the Giants, while the Swifts will be aiming to keep their premiership defence alive.