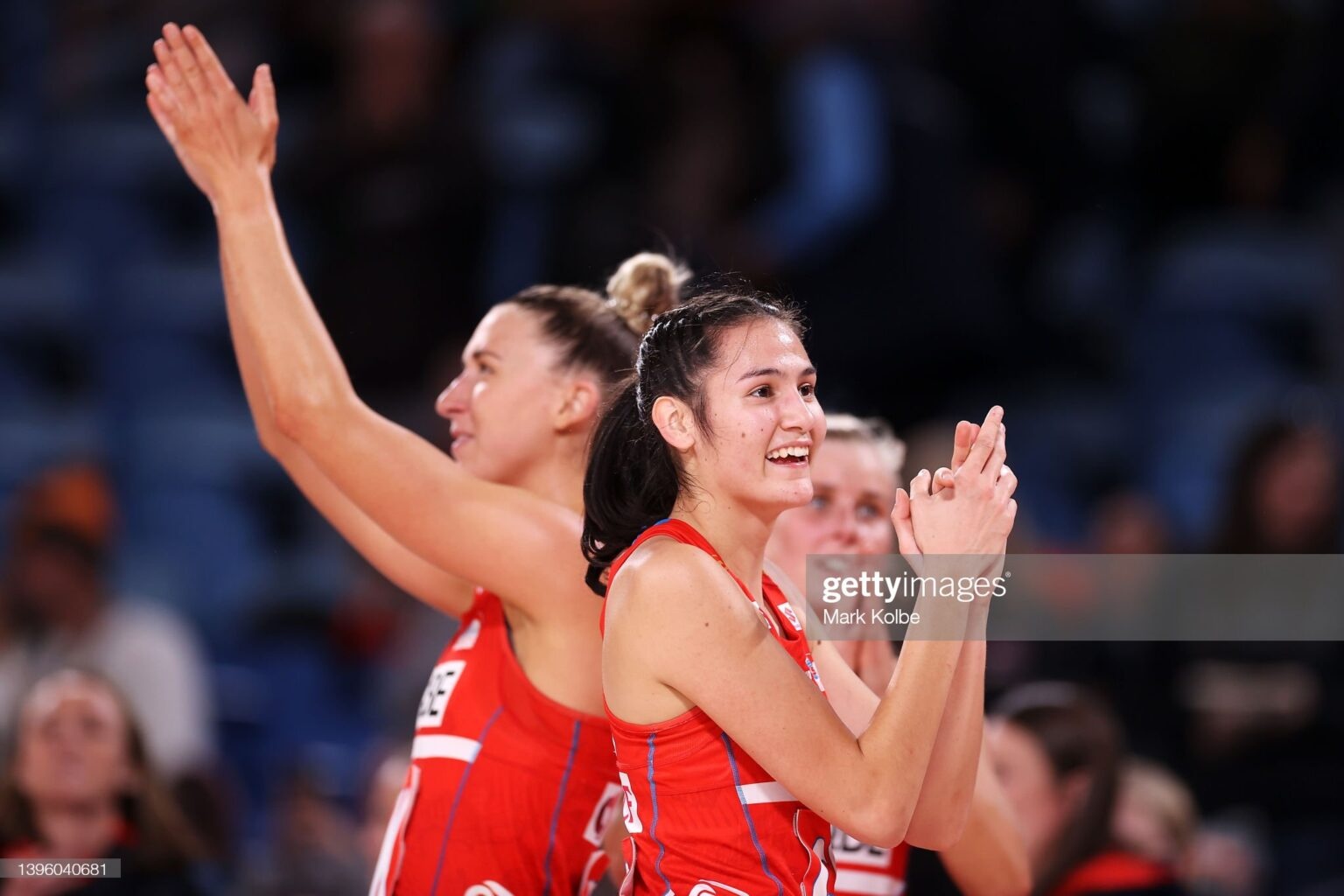 The NSW Swifts have started the second half of the year by getting revenge on the Giants with a nine goal win as they hope to turn around their fortunes.

The NSW Swifts have started the second half of the year by getting revenge on the Giants with a nine goal win as they hope to turn around their fortunes.

The NSW Swifts have shocked the Giants in a NSW-derby, and extracted revenge for a Round One matchup that went the Giants way. The Swifts managed their third win of the year 52-43.

The Sydney derby was Sophie Fawns' first match against the cross-town rivals, as she didn't take the court in Round 1, and has since replaced Sam Wallace in the Swifts team.

It was also Lauren Moore's first matchup against her old team, after she missed Round 1 due to health and safety protocols.

The Swifts jumped out to an early lead, capitalising on a Giants error to get the first mini-break of the day, but never really took control away from the Giants in the first quarter.

Tayla Fraser was heavily involved for the Swifts, both in slowing down Maddie Hay, and as a second phase playmaker, to keep the ball moving across the transverse line and into the attacking half.

Lauren Moore was injected into the game to try and quell the influence of Helen Housby, but it was Maddy Proud wreaking havoc, with four feeds in one play early in the second, and Paige Hadley, who managed three feeds in a single passage just two goals later.

The Swifts' ability to get to circle edge early and often allowed silver service to the shooters, who rewarded the team with accurate shooting, and only two misses in the first half.

A few errors crept into the Swifts game late in the second quarter, but by the end of the quarter, the gap was six goals to the Swifts.

Maddy Proud was almost on pace to break Laura Langman's record of most feeds in a game (66), as she racked up 28 in the first half.

Lauren Moore was shifted in the third quarter into wing defence, and Amy Parmenter into centre in her 50th game. The Giants were more successful at protecting the circle edge with the new combination.

Sophie Fawns was thrown into the game and had an immediate impact, with five goals in the quarter, as Kelly Singleton came from the court.

Paige Hadley was forced from the court with a blood rule early in the fourth quarter, after Lauren Moore ran into her.

Allie Smith entered the fray as a ball of energy in her place, and Jamie-Lee Price was brought back onto the court in response.

Despite all the changes in the second half, the Swifts maintained their composure and extended their lead. A calm presence was key, as the Swifts strung together their two best halves of the season back to back in the hometown clash.

As the game wore on, Sarah Klau's form wore on, as she had nine gains and six deflections for the match. Proud finished with 57 feeds and 31 goal assists.

In the end, the Swifts held on to record a nine goal win, and get revenge for their heartbreak earlier in the year.

Proud explained after the game that the Swifts have separated the season, and still hold high ambitions of defending their premiership.

"We’ve labelled it ourselves “Season 2022 Part B” and this was the first step in that," Proud explained.

"We talked about that we lost five games last year and then won a grand final. We’ve lost five but we can still go all the way, and theres no doubt in our minds and we’ve known that in the last few weeks the only thing thats got us down has been ourselves.

"We know that we can beat any team on any given day, we just have to make sure we show up and play the way we know we can play and be in control and be smart with the way we do play."

"We knew that we just needed to be calm. That was our method all week.

"We knew that we were taking a breath, and obviously when we had that change up between going fast netball, and being really patient and going back to the ‘Swifts of old’, where we used to play the ball around until something opened up."

Coach Briony Akle agreed with that, and added that Proud and Hadley had put together a strong performance.

"I didn’t think [Paige] is giving herself enough credit, I thought she had a great game. Between her and Maddy, that first five minutes, I thought they set that attack end up, and took the pressure off Kel [Singleton] and Soph [Fawns] and I’m just proud of them all.

"We don’t have a seven foot shooter standing there, so we’ve just got to make that work, and thats been the plan all along since Sammy went down, so I think we’ve had practice this week with an eight day turn around.

"We knew what the Giants would bring and thats certainly physicality, and to combat that I think we’ve got great speed, so its always going to be the tough one with bodies on the line in the Sydney Derby."

Maddy Turner explained that the Swifts had a focus on how the defensive end would slow down Sophie Dwyer and Jo Harten, with the same result as last year's grand final.

"This was more to shut down the shooter to shooter," Turner said. We know how lethal Jo and Sophie can be if they have that connection, so to break those two apart was our focus. I

"I don’t think Sarah and I have done so much [Player Analysis] with Bec [Bulley] trying to work out how to sort that out, and it was good to put that into practice, and I think Bec was happy that we finally got it done.

"We were trying to work together to stop the one under the post and force the long bomb, because we knew that we could get those rebounds - and when they were under pressure, that was what we wanted to do.

"Defence is a full 60 minute game. Sometimes you might not get the rewards early, but Sarah did a great job working her out, and taking the full 60 minutes to come up with some beautiful ball at the end, which is what helped us get across the line.

"We reviewed the Round One game. We acknowledged that we were out of play too much, and we tried to stay in play, still contesting ball but staying in play, to try and make them play faster.

"They are a slow team that like to control the pace, and when they couldn’t do that, they had to play at our pace, and thats what we wanted."

Turner also mentioned the Swifts' plan to treat the rest of the year like a new season.

"At the moment we’re starting off 2022 Season Part B, so we’re going for 7 to win on the trot to get into finals."

Paige Hadley, who suffered a late facial injury, after a collision with Lauren Moore, was happy with the Swifts' uptick in performance.

"Personally, I was rapt with the whole attack end. We’ve worked really hard as a unit and we’ve obviously been disappointed with the last few weeks.

"We were building something like that, so just really proud the four of us at that attack end, we worked hard, we worked for each other and stoked to be out there with them."

For the Giants, the loss has brought the momentum back to earth, after a huge win over the Sunshine Coast Lightning last week.

Goal keeper Tilly McDonell attributed the slow start, in part, to a carryover from the 28 goal win last week.

"It was a big weekend, and we will just blame it on a bit of a hangover. We just look to next week and train doubly, and look for next week," McDonell said.

Parmenter, who was celebrating her 50th game, agreed that the second half was an improvement as the Giants got into the game.

"I think we came out better in that second half. Maybe in that first half we didn’t come out quick enough and didn’t get ourselves firing a bit harder," Parment said.

"Sometimes its like that. Some times its not your day, and I think we’ve just got to work out how to build that consistency, because thats something we’ve had an issue with the last few years."

"Obviously not the result we wanted, but we’ve had a really good few weeks, and this is a reminder that we’ve got a lot of work to do if we want to keep pushing.

"It's probably not a bad time to have a reminder or a wakeup call."

For McDonell, the Swifts' circle combination of Fawns, Housby and Singleton was a more mobile challenge, and the moving target took a while to adapt to.

"It's a lot different to having a big shooter and then a moving goal attack. I think its a good lesson for us in terms of angles and connection and where the ball is going.

"I think we definitely grew in the game, but I think we just took too long to get into it, and thats not good enough at this level."

"We needed to attack the game a little bit more aggressively, so we need to look at that for next week."

Brandley was also excited to see Lauren Moore play well against her hold side.

"Loz just brings such a great energy, Her first ball, and hard work on the [defensive circle] are phenomenal. She did a really good job today and it was good to see her up against her old club."

For Brandley, there were positives to take out of the game, as the Giants continued to fight.

"I think that we just didn’t give up, and we stuck to what we were trying to achieve for the four quarters, I think it was a super tough game out there and it would have been easy to take our foot off the pedal, but we showed our Giant spirit and just kept pressing right to the end.

"Disappointing result, but I think once we get that start right that will help us at the end of the game."

Brandley was the only mother out on court today, and marked the occasion.

"It's awesome to have my little boy up in the crowd, and I think its so great to see so many mums here today."