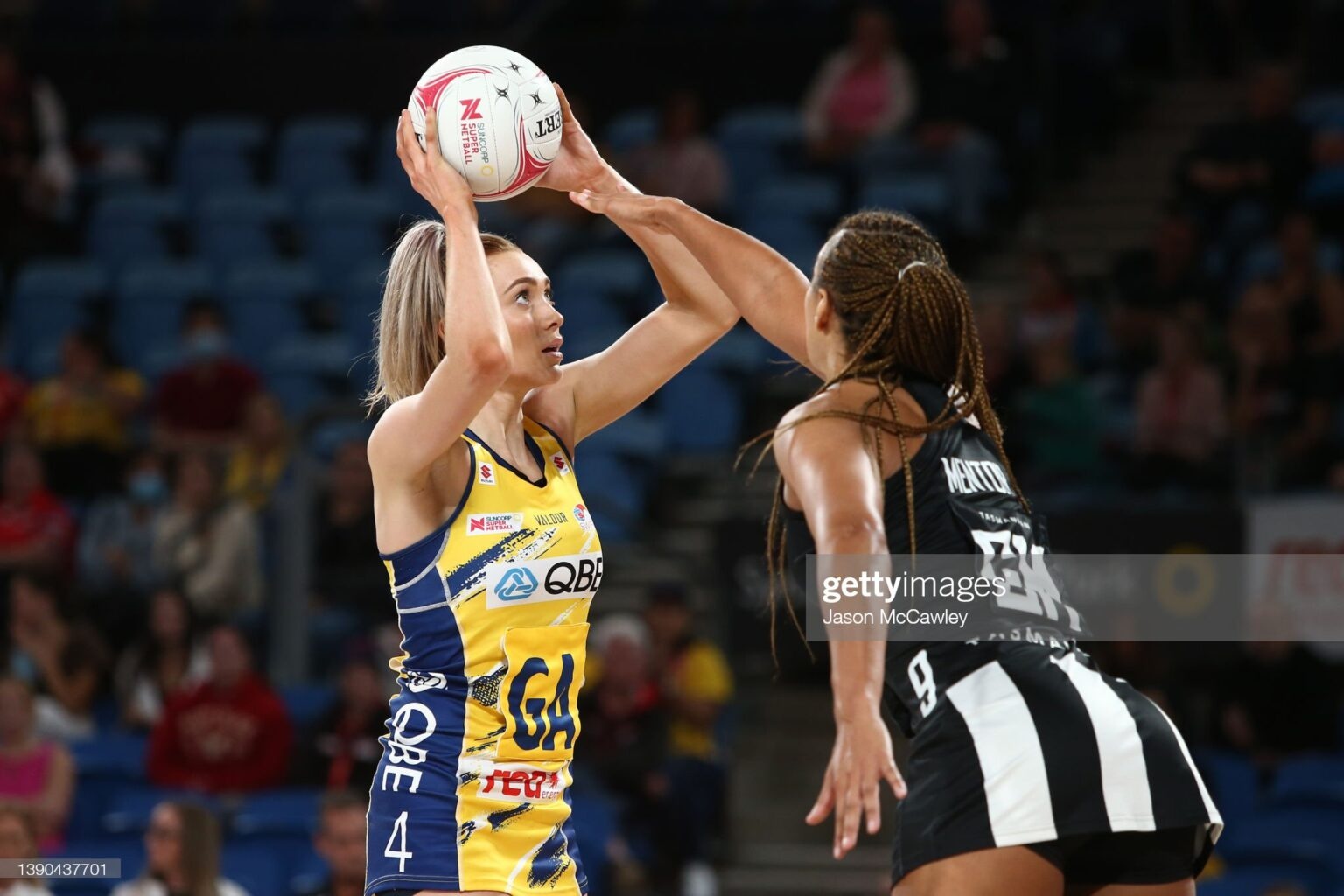 Swifts get first win of the season over still-winless Magpies

The NSW Swifts have a win on the board for the 2022 Suncorp Super Netball season, after beating the Collingwood Magpies by 11 goals.

Swifts get first win of the season over still-winless Magpies

The NSW Swifts have a win on the board for the 2022 Suncorp Super Netball season, after beating the Collingwood Magpies by 11 goals.

The NSW Swifts were enjoying a third consecutive home game to start the season, and the fact the Swifts have been settled showed. Coming up against the Collingwood Magpies, the Swifts settled, and then overpowered the visitors to win 75-64.

The Swifts were welcoming back Paige Hadley from COVID-19, and the midcourt immediately looked different to last week.

"Paige just brings so much leadership, that calm head, and she’s just got that sheer determination," Proud explained.

"I think seeing her back on court was just unreal and then, when Tayla [Fraser] came on as well, I thought she injected those fresh legs and she was brilliant as well, so its good to see we’ve got such versatility through that midcourt."

Despite the Swifts looking settled, it was actually the Magpies who led at quarter time, as Shimona Nelson put together a strong performance at goal shooter. Nelson was dominant, as she kept Sarah Klau at bay early.

The tide started to turn at quarter time, as Briony Akle swung the changes. She brought Teigan O'Shannassy on for her debut to play in goal keeper, pushing Sarah Klau out to goal defence and Maddy Turner to wing defence.

The change brought height to the Swifts' defence, slowing the Magpies' ball movement through the midcourt and into the attacking circle. O'Shannassy's tall frame also disrupted the feeding into Nelson, causing a number of turnovers.

"It was just about getting a bit of variety out there and giving them something different to look at. Kel [Kelly Singleton] did a really nice job to start the game off, and its hard to start a game as well.

"I thought she just had such a cool head, her court craft is brilliant, and it obviously gave Helen a chance to play back in shooter, and then when Helen is out in goal attack, I think she adds so much in that front end, even in defence as well, so it was great to now that we have that versatility, and we don’t use have one combination that will work, we’ve got multiple across the court."

At the other end of the court, Sophie Fawns entered the game, bringing the same energy, accuracy and movement that she showed off in her debut last week.

The changes Akle made set the game on a different path, as the Swifts pulled ahead, leading by seven goals at half time, with Helen Housby knocking down two Super Shots in the final 90 seconds of the quarter to extend the lead.

Housby was proud of the way her young shooting partner was playing.

"t was awesome. She’s not playing like she’s an 18 year old, she’s so excited, she just goes out there with absolutely no fear, and I think you can see that in her shot, and in her movement," Housby said.

"Every time I look back, she’s got a massive ensile on her face. It’s really nice to play with someone with that infectious energy, and I think the only way is up for her."

The Roses star also had praise for the debutant at the opposite end of the court, in O'Shannassy.

"She’s been awesome, she’s been training super hard, and it was unfortunate that she had COVID the first round of the season, but its pretty epic for her to get out on court and get her Swifts number and do it in a win in front of the crowd is pretty cool."

When the Magpies emerged for the third quarter, Shimona Nelson had been switched out of the game, with Sophie Garbin in goal shooter, and Gabby Sinclair in at goal attack. Nelson was sent to the bench, despite having scored 26 of Collingwood's 30 goals to half time.

"Shimmy [Nelson] shot at 26/26 and Sophie [Garbin] shot 19/19," Richardson said. "What we need to do in that second quarter, we lost that second quarter on the back of quite a lot of dropped balls, so I felt that a change needed to be there."

"We got a bit stagnant in our attack end, when we didn’t really set up the gaoler by throwing Sophie and Gabby in there, you’ve now got a goal shooter coming out and connecting, which gives another option in the attack end.

"Even though Shimmy had volume at 26, those three or four balls that were dropped, whether its placement of the pass, or band hands, at the end of the day, the ball is not getting to where its got to get to, so I felt we needed a change.

"We ended up shooting more in the second half than in the first half, so I didn’t think we lost anything by taking Shimmy off, and having Sophie back there."

At the other end of the court, Jacqui Newton swapped in for Geva Mentor, Ash Brazill moved into centre and Molly Jovic to wing defence.

The changes weren't enough to make a difference, as the lead quickly grew to ten goals.

"Jacqui has a bit more coverage on the first ball than Geva," Richardson said.

"Obviously, Geva is a general down in the defence end, but Jacqui has a capacity to win ball, so we just thought with a moving circle, and with goalers coming out on extension, that Jacqui would be able to get in the contest a little bit better than what Geva was doing.

"Geva, at the end of the day, wasn’t winning ball, so we needed to make a change there as well."

Housby again made two Super Shots late in the third quarter, pushing the lead out to 13 goals at the final break. The English Roses star was key for the Swifts, with 43 goals, including a perfect four from four for Super Shots.

The Swifts weren't challenged in the final quarter, growing the lead out to 15 goals before a late barrage of Super Shots from Gabby Sinclair brought the margin back to 11 to finish the match.

For the Magpies, there are positives to take out of the early part of the match, as Richardson explained.

"We’ve struggled in that space over the first couple of rounds, but Gabby Sinclair shot seven from seven, so that was a positive, it was our highest score out of the three games we’ve played, so another positive there, but obviously plenty of 'work-ons'."

For the Swifts, Housby is looking forward to the short week.

"I love it because we won’t have to do as much training. We just go straight from a game to a game to another game.

"Obviously we will get off our legs, and do an ice bath, but I’m excited to get out and play. That’s why we do it, that’s why we do big long preseasons, so for me it's pretty cool."

The Swifts had their first win of the season, and will now turn to Adelaide for a mid-week matchup against the Adelaide Thunderbirds.

The Magpies will look to regroup against the Sunshine Coast Lightning during the week as well.