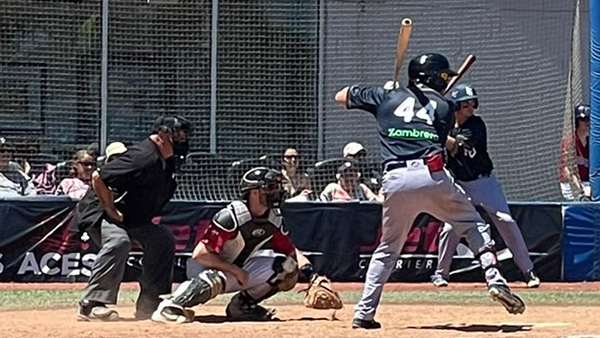 The Adelaide Giants completed an away series win over the Melbourne Aces 10-2, to take the final match of the Melbourne Challenge.

The Adelaide Giants completed an away series win over the Melbourne Aces 10-2, to take the final match of the Melbourne Challenge.

The Adelaide Giants inflicted plenty of offensive damage to its opponents in Game 3 of The Melbourne Challenge, beating the Melbourne Aces 10-2 as the side's young pitching stocks were also on display.

Following the first two games of the three-game series - a2-1 Aces win on Friday nightand a7-1 Giants win on Saturday night- it came down to the decider on Sunday, although the visiting team completed a comfortable victory in the end.

Adelaide shot out of the blocks early as loan player Donald Lutz homered in the first inning, and despite Melbourne tying the scores by the end of the second inning, the visiting team piled on more runs throughout the seven-inning encounter - including a four-run fourth dig.

The Giants trialled six pitchers across the ballgame with the young talent on show, as the offence did the required work also, undeterred by an Aces club that had won back-to-back Claxton Shield titles.

Adelaide's lead-off batter Jack Partington grounded out to start the ballgame but then, Rixon Wingrove blasted a Steven Chambers pitch into centre right field for a stand-up double, giving the visitors a baserunner early.

Melbourne first baseman Jack Barrie collected a Mitch Edwards hit all by himself and took it to first unassisted for the force out - the second out of the inning.

However, Donald Lutz would hit the first home-run of the series, the ball sailing over the right field fence for a two-run shot as the Giants took an early lead against the Aces before Wade McConnon popped up to Jared Cruz at short stop for the final out.

Melbourne's lead-off batter Aiden Willis got on base with a first-pitch single that dropped in front of the centrefielder, advancing to second after Darryl George connected on another first-pitch strike, but was put out via a great gather and throw from third base Liam Bull.

Willis made it to third, running when Jack Barrie had to run to first due to a dropped third strike call, and didn't want to risk going home despite Adelaide pitcher Riley Yeatman throwing a pitch that went by the catcher. Melbourne had runners on the corners when Kyle Perkins earned a walk but neither would score as Cruz grounded into a fielder's choice towards second base.

It was a three-up, three-down top half of the second innings for Adelaide, with Mitch Lightbody striking out swinging before Bull and Max Stagg flew out to left field, and centrefield, respectively.

Melbourne again demonstrated its aggressiveness, Nick Bertucci sending the first pitch from Yeatman into left field for a single. Bertucci would score from first on a double from designated hitter Marcus Graham who found the left field corner, halving Adelaide's lead.

Graham advanced to third as Bronson Neave grounded out to third base for the first out, and would cross home plate and level the scores when Sam Skinner grounded out to first base, unassisted. Willis flew out to end the second inning.

Darcy Barry would ensure he was a lead-off baserunner for the Giants, making it to first safely on a hard-to-handle pickup and subsequent throw from Cruz at short stop. Partington struck out looking before Wingrove earned a walk, however Edwards grounded into a double play to end the top half of the third inning.

The Giants entered a new pitcher at the bottom of the third inning, bringing in Craig Barnett, who got George to strike out looking on three consecutive pitches for the first out. Partington caught a deep fly ball it by Barrie, on the warning track and Barry made it a three-up, three-down dig with Perkins grounding out.

Lutz was the first Adelaide batter to be sent back to the dugout, popping up to George at short stop as McConnon singled into right field shortly after, becoming a baserunner in scoring position when we stole second on a pass ball. He stayed at second, not looking to advance as Lightbody reached first on an error.

McConnon made it to third on a steal and the Giants had runners on the corners, but Lightbody wanted to get into a scoring position too, stealing second during Bull's plate appearance. Bull was able to lift a ball into the gap between centrefield and right field, allowing enough room for McConnon and Lightbody to score, and double Adelaide's lead.

Stagg continued the hits for Adelaide, reaching safely with a single, the side scoring once more in the fourth inning through Bull when Partington got the ball to bounce in front of Bertucci in right field for a single, with Stagg holding up at third base.

It would become a four-run dig for the Giants when Stagg scored after Cruz looked to take a Wingrove hit to second base himself, however, in a close play, the umpire ruled Partington safe and the inning continued but nothing would eventuate further as Edwards lined out to George to end the top of the fourth.

It wasn't quite as eventful for the Aces in the bottom half, as a Giants pitching change, bringing in Jordy Grose, saw the hosts going three-up, three-down.

Adelaide then went three-up, three-down to begin the fifth inning with Chambers claiming his second strikeout of the ballgame before Cruz was involved in the following two plays for the next two outs.

Neave was the first Aces batter out in the fifth inning, and despite Skinner reaching first with a centrefield hit, the next two batters went down in succession.

Bull got things going for the visitors in the sixth inning with a single into left field, before Stagg struck out looking, but Bull would be out at second on a force play, the Aces attempting a double-play although Barry was ruled safe at first. On a wild pitch, Barry went to second, and scored with a Partington double into left field, though had to slide in a close call.

Wingrove earned his second base on balls for the afternoon but neither he nor Partington could add to the scoring tally as Edwards flew out to left field.

The Aces found two runners on base in the bottom half - Perkins reaching on an error and Bertucci singling to centrefield -, however, the Giants, with another pitching change, bringing in Mitch Kennedy, found the required three outs.

The Aces made its first pitching change of the game, bringing Hayden Peoples to the mound however, the Giants loaded the bases with the first three batters up before a Bull sacrifice fly scored a run, pinch-hitter Brody Arriolla.

Even though Stagg struck out looking, with Lightbody and Bull each in scoring positions, the former scored from third on a Barry hit into left field and then the latter scored too after the pitched ball was launched into the backnet becoming a blocked ball, which earnt an extra base, making the score 10-2. Partington flew out to centrefield to end the dig.

The Aces entered its final chance of the afternoon to advance the game, and although Neave reached first with a walk, Skinner, Willis and George each went down in succession via flyouts in the outfield, handing the Giants a huge Game 3 victory.

For the home side, the Aces tallied five hits with Nick Bertucci collecting two - both singles - with Aiden Willis, Sam Skinner and Marcus Graham credited with the others, the latter of the trio bringing in the side's two runs of the contest.

With the ball, Melbourne used two pitchers as starter Steven Chambers went through six innings for 10 hits and eight runs with three strikeouts. Reliever Hayden Peoples finished off the game with one inning on the mound for three hits, two runs and one strikeout.

For the victors, the Giants tallied 14 hits with Darcy Barry leading the way with three across the course of the game, while Jack Partington, Rixon Wingrove and Liam Bull each had two. Bull lead the way with three RBIs while Partington and Donald Lutz had two RBIs each, the latter scoring a two-run home run in the first inning.

With the conclusion of The Melbourne Challenge, Australian Baseball League teams will continue to play exhibition games in the midst of a cancelled 2021/22 ABL season. The Adelaide Giants' next fixture sees the club travel to Brisbane to play the Bandits, while the Melbourne Aces are yet to announce a further series.