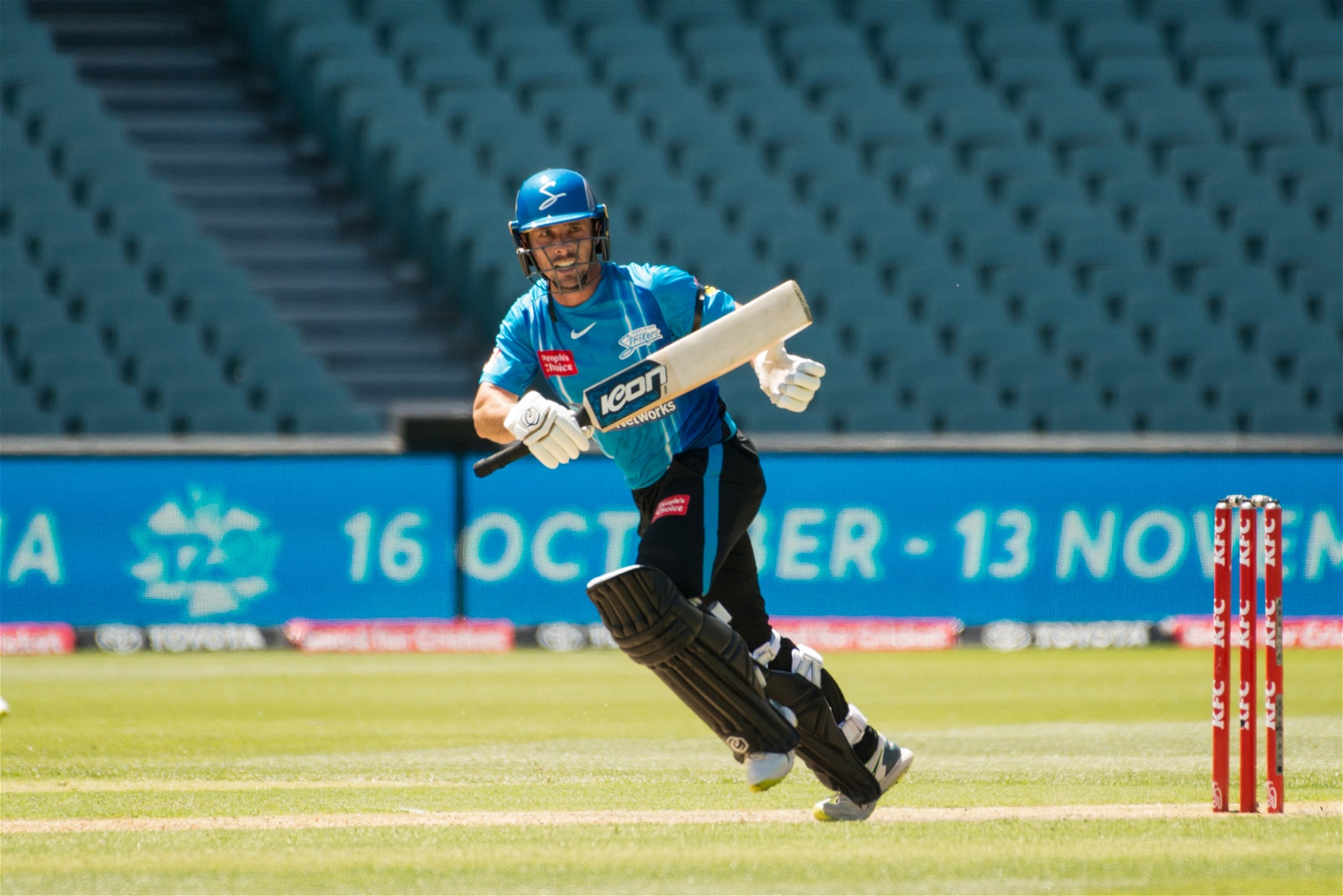 The Adelaide Strikers are finding form at the right time, recording a third consecutive win with a 23 run victory over the Melbourne Stars.

The Adelaide Strikers are finding form at the right time, recording a third consecutive win with a 23 run victory over the Melbourne Stars.

The Adelaide Strikers are peaking at the right time, recording a third consecutive win with a 23 run victory over theMelbourne Stars.

With multiple international stars heading home over the last few days and players returning from Covid-protocols, both the Strikers and Stars have seen some changes to their lineups.

For the Stars, international signing Ahmad Daniyal from Pakistan returned to the squad after the departure of Qais Ahmad and Haris Rauf.

With finals right around the corner, the Stars are eager for every point they can scrounge up so captain Glenn Maxwell elected to chase.

Matt Short, who made 34 against the Perth Scorchers yesterday, continued his strong batting form with another great start including two boundaries and a six in the first two overs.

His opening partner, Matt Renshaw, who returned to the side following his Covid-19 isolation period, was unable to make an impact on the scoreboard, bowled for two runs in the third over.

Short continued sending the Stars' bowlers to the rope, Adam Zampa was sent there twice in one over, while Ian Cockbain settled in at the other end.

Short's innings came to an end in the 30s again, caught and bowled by Clint Hinchliffe for 33.

Jono Wells came in and quickly built a strong partnership with Cockbain, they rotated the strike and found the boundary well to start constructing a reasonable total for the Strikers.

Hinchliffe and keeper Joe Clarke were able to combine to remove Cockbain before he really got going, dismissed for just 17 from 17.

In the final five overs, Wells pushed hard to lift things for the home side, while Jake Weatherald's slow batting continued and he departed for 17, caught on a mistimed slog by Hilton Cartwright.

A 36-ball half-century was an important batting innings from Wells, which helped Adelaide reach a defendable total.

Thomas Kelly was bowled by Ahmed Daniyal, one of his smaller contributions since making his debut earlier this season.

Wells was run out coming back for two off the final ball, and the Strikers finished 6/155.

Speaking post-match about his best contribution in BBL|11, Wells was fairly comfortable with where his role is at.

"It's [the back-bone role] probably my role in the team. I'd like to be big and powerful and smashing balls over the rope, but I've got to do it a bit of a different way I guess.

"Summing up the conditions and the wicket, we knew that sort of score was going to be really competitive."

New recruit Henry Thornton got the first breakthrough for the Strikers, a 148km/h bullet bowling the dangerous captain Maxwell for 16.

Clarke was next to go, an inside edge chopped onto his leg and onto his stumps. The luck was not with the Stars' batter today, heading back to the dugout for just nine runs.

Also returning from isolation, Stoinis was fit to bat, but not bowl, and his contribution nowhere near what the Stars' required in the first half of the chase. He was out for one.

Things only got tougher for the Stars, who lost Beau Webster for eight, caught behind by a very sharp Nielsen dive.

The Strikers had a strong middle period of their bowling innings, keeping the Stars' run rate under six.

Peter Siddle sent Joe Burns packing with a ripper ball that went through off stump. Burns didn't connect with the straight and full delivery and had to go for 25.

Hinchliffe found the middle of the bat and smashed a six over mid-wicket to have the Stars 5/95.

With 15 runs an over required, things got moving in the 17th when Cartwright started swinging at Fawad Ahmed. He sent him into the stands for three sixes and took a total of 22 off the over, making it a tight 39 required from three overs.

The home crowd's nerves were eased as the ball landed safely in the hands of Kelly, Hinchliffe's innings ended by the catch for 15. It was Conway's first wicket for the day.

While Kelly said it was "a bit nerve-racking" on the broadcast, his catch, and one from Short at deep midwicket in the next over, were the key wickets that put Adelaide in the box seat to take the win.

Thornton finished with four wickets, the Short catch ended Cartwright's innings on 49, and then he bowled right through Sam Rainbird's leg stump.

The young gun from New South Wales was named player of the match, but Thornton said post-match that he is just hoping to help the side make finals, so he can get a few more Big Bash games.

Siddle took one wicket to move into the outright lead in the Golden Arm stakes, moving ahead of teammate Rashid Khan.

Hilton Cartwright made 49 runs for the Melbourne Stars in their loss to the Adelaide Strikers. Photo: Supplied

It's been a tough season for the Stars, who finished 23 runs short today. Finals are not technically out of the question, and the team is in better spirits heading into the final week of regular games said Cartwright post-match.

"I can't comment on behalf of them because I didn't go through what they went through, but if I was to say anything I would say we've got more energy in the change room at the moment.

"I think especially over the last 24 hours, coming to Adelaide, knowing how our season's panning out at the moment, I actually felt like there's quite a bit of energy rolling through the change rooms, there was a bit more banter starting to flow about."

They'll need all that team camaraderie and connection going into tomorrow's clash back home at the MCG.

The Melbourne Stars will want to bounce back quickly against the Brisbane Heat tomorrow, while the Adelaide Strikers return to Adelaide Oval on Monday night to host the Sydney Sixers.