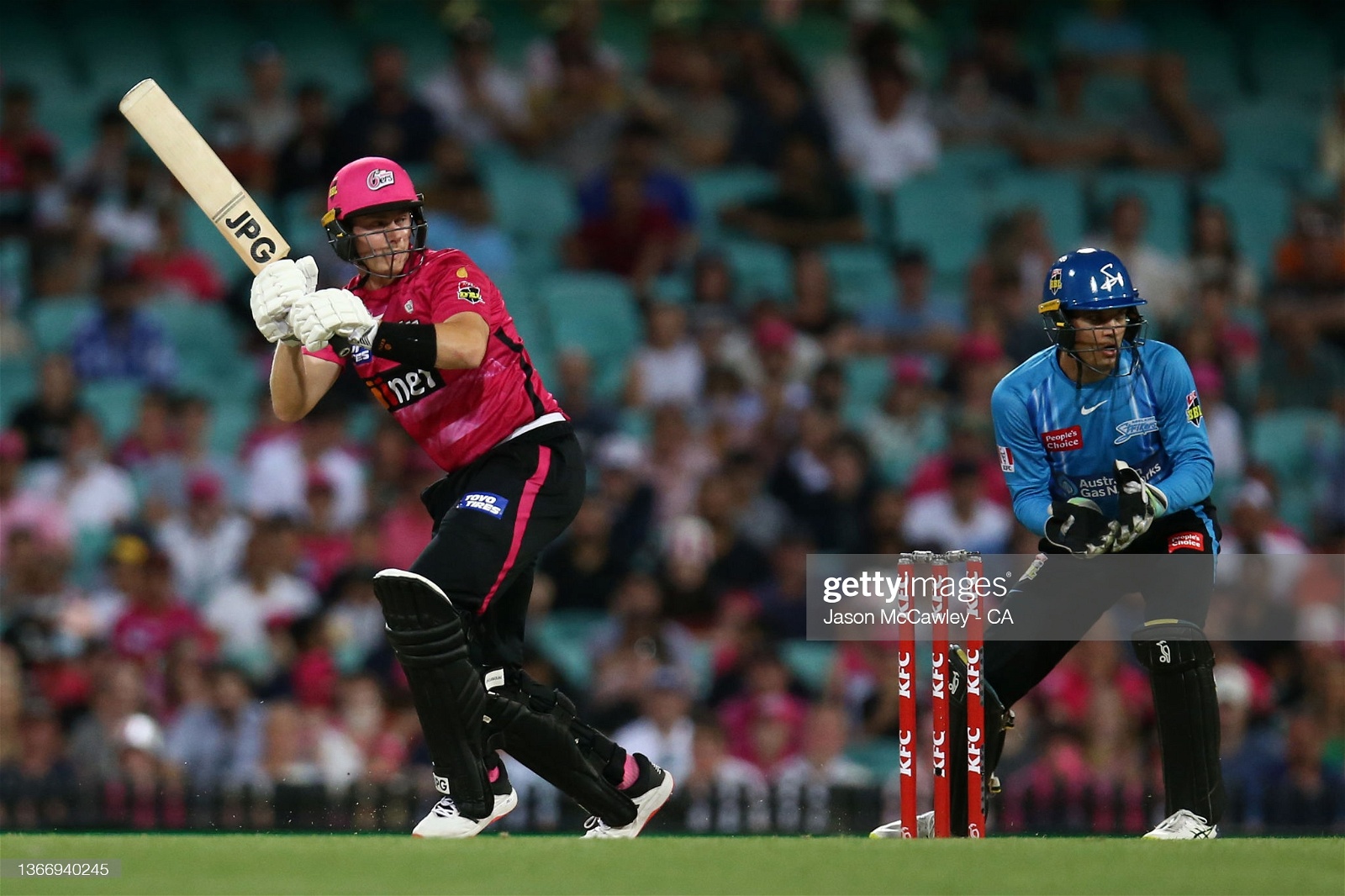 A stunning knock of 98 not out from Hayden Kerr has kept the Sixers' three-peat hopes alive after defeating the Strikers in The Challenger.

A stunning knock of 98 not out from Hayden Kerr has kept the Sixers' three-peat hopes alive after defeating the Strikers in The Challenger.

Hayden Kerr's stunning knock single-handedly kept the Sixers' three-peat hopes alive after defeating the Strikers in the penultimate Big Bash final. It went down to the wire, with a tense final couple of overs to decide the winner.

The Sixers were down on experience heading into The Challenger, with Josh Phillipe and Dan Hughes sidelined. After missing Saturday's Qualifier, Hughes fell short of selection for tonight's clash again, after failing a fitness test hours before the match. Debutant Jake Carder replaced Josh Phillppe who tested positive for COVID-19 earlier in the day.

However, despite their pre-game misfortune, the Sixers found some luck and won the toss, electing to bowl first. The Strikers sought a competitive total to take the side into the decider, but the Powerplay didn't go to plan.

In previous matches, losing wickets in quick succession has been an issue for the Strikers, and tonight it was no different. Alex Carey and Matt Short's opening partnership lasted four balls, with Carey caught by Dan Christian at mid-off after facing two deliveries.

The next over, Short hit a well-timed four off Sean Abbott but joined Carey in the shed the next ball. Again, Christian took the catch, only this time he was at first slip.

Travis Head joined Ian Cockbain at the crease, but this partnership ended in the fourth over as Head was bowled by Abbott for three runs.

At the Powerplay's conclusion, the Strikers made a meagre 34 runs, needing a stable partnership to build a competitive total. It came in the form of Ian Cockbain, repeating last match's heroics, and Jono Wells who combined for 83 runs from 63 deliveries.

The pair took the score to 62 at the drinks break and looked ready to continue building a competitive total and the following over, they met the 50-run milestone for the partnership. They continued on their merry way, barely relying on boundaries, but running between the wickets to build the score.

In the 15th over, the Sixers took the Power Surge. However, two balls in, Abbott took his third wicket, bowling Cockbain for 48 runs, and ending the partnership. Next in was Matt Renshaw, who found the boundary well to make a quick 36 runs from 20 balls before the innings ended.

Wells was the standout batter, knocking 62* from 47 balls, which helped the Strikers to 4/167.

For the Sixers, Abbott once again proved he was one of the competition's premier bowlers, taking 3/27 off four overs. He went for 6.75 runs an over, with only Hayden Kerr having a lower economy rate (5.25). Every other bowler went for over eight runs an over.

THE ADELAIDE STRIKERS BOOK ITS TICKETS TO SYDNEY

SCORCHERS BURN THE SIXERS TO BOOK A SPOT IN THE FINAL

167 is a defendable total, but also an achievable chase for the Sixers, making the second inning a thrilling watch. Opening the batting was Justin Avendano and Hayden Kerr, who had moved up from his usual middle-order position.

The all-rounder escaped a first-ball dismissal as Alex Carey missed a crucial stumping. Fellow opener Justin Avendano wasn't so lucky, departing the crease after getting caught behind for one run off eight balls.

In next, was debutant Jake Carder, who stayed with Kerr until the eighth over, facing 13 deliveries before being dismissed for 10 runs. During this time, Kerr had another near dismissal, mis-timing a shot to an awaiting Matt Renshaw at deep midwicket, who proceeded to drop the catch.

From that moment, Kerr continued to surge his way to a maiden Big Bash 50 in the 11th over.

In his first two overs, Golden Arm recipient Peter Siddle had yet to strike, however, this changed in his third. Siddle committed skipper-on-skipper crime, bowling the perfect yorker to dismiss the Sixers skipper Moises Henriques for 13 from 15.

The Sixers' inability to build a stable partnership continued as Dan Christian was caught at cover for one run. With his partners falling around him, Kerr continued to find the rope and build the total. He was the Sixers' only boundary hitter until Sean Abbott slogged a six to deep mid-wicket in the 16th over.

With two overs remaining, the result could've swung either way. The Sixers required 27 runs from 12 balls. Kerr was on 80 and didn't look like he was slowing down, and Abbott was knocking boundaries with ease. However, the Strikers bowling unit wasn't making it easy to score.

Henry Thornton bowled the penultimate over, going for ones and twos off the first few balls. Additionally, a brilliant piece of fielding from Travis Head saved an almost certain four. His near-perfect over was unravelled by a head-high wide, and six, courtesy of Sean Abbott.

Overall, he conceded 15 runs off the over, meaning the Sixers needed 12 runs to win, in what was looking to be a tense last over.

In the final over, Harry Conway took the crucial wicket of Sean Abbott off the first ball. The Sixers bowler departed for a well-made 41 runs from 20 balls. A boundary was needed to relieve pressure as Ben Dwarshuis was run out for a duck the next ball. Jordan Silk made a single, putting Kerr back on strike, who cleared the boundary for six.

Only four runs separated the Sixers and Strikers' championship contention hopes. The next ball was sent down the ground for two, leaving one ball to get two runs.

However, controversy struck as the Sixers requested a change in batters. Jay Lenton replaced Jordan Silk at the crease after Silk appeared to carry an injured hamstring.

Kerr sealed the match, sending the final ball to midwicket where Jono Wells fumbled it, and the ball subsequently went over the rope. He finished on 98* from 58 balls with 10 fours and two sixes, to secure a well-deserved Man of the Match award.

Despite the pre-game hiccups, the Sixers showed why the side remain in contention for a third-straight title as it comes up against the Scorchers in The Final for the fifth time in the league's history. The two teams have a 2-2 record against each other The Final, with the Sixers coming away victorious in 2021.

The Sixers will travel to Marvel Stadium to play the Scorchers The Final on Friday night.