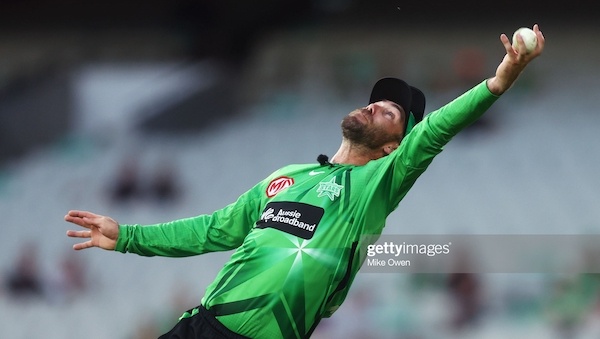 Sluggish yesterday against the Strikers, the Melbourne Stars had renewed energy in an eight wicket smashing of the Brisbane Heat on Sunday.

Sluggish yesterday against the Strikers, the Melbourne Stars had renewed energy in an eight wicket smashing of the Brisbane Heat on Sunday.

After looking down and out against the Strikers yesterday, the Melbourne Stars had renewed energy in an eight wicket smashing of the Brisbane Heat.

It was all on the line for the Stars in their penultimate regular season match, remaining in the hunt required a win against the Heat and favourable results until their final game on Thursday.

And they did exactly that.

Glenn Maxwell led from the front, taking catches and making strong decisions as captain to set his side up for victory, which was then supported by his 37 run innings off his bat.

Brisbane was bolstered by the return of all Covid-19 affected players from isolation, and the addition of Test paceman Michael Neser returning from Australian duties.

The experience was welcomed, but wasn't enough to help the side end a three-match losing streak.

It was a special night for the Heat's Chris Lynn, who became the first male player to achieve the 100 BBL match milestone at just one club.

He smashed a six on the second delivery he faced and looked in fairly good touch.

Stars' captain Glenn Maxwell brought himself on for a bowl and struck, ending Lynn's innings on 28, Nathan Coulter-Nile taking the catch.

Ben Duckett and Lachlan Pfeffer had a bit of luck, finding fielders on one bounce, but it was short-lived as Pfeffer was caught by X-Factor substitute Nick Larkin, off the bowling Maxwell.

Sam Heazlett joined Duckett at the crease, the pair taking nine runs from the 15th over - the most runs in an over since the sixth.

The partnership was broken by one of the more extraordinary catches seen in Big Bash cricket, Maxwell running back took a one-handed, back-handed catch to dismiss Heazlett for nine.

Coulter-Nile was the bowler, and neither he nor Maxwell could quite believe the take.

Duckett continued on to reach his half-century with a four off Adam Zampa's bowling.

He was bowled by the Stars' spinner just four deliveries later, departing for 51 (from 42).

Peirson whacked Coulter-Nile straight for four and the Heat brought up 140 in the 19th over.

The Heat finished their batting innings 6/149.

In his first game back with the Heat, Neser bowled the opening over of the second innings. It was far from his best, bowling two wides and a going for a boundary to go for 10 runs.

Mark Steketee's first over wasn't much better viewing for Heat fans, as Maxwell edged one between slip and Peirson for four, and a second pulled past fine leg.

It was just the start the Stars' were after, with every match must-win to make finals.

Joe Clarke joined in sending James Bazley for a big six, which was dropped by the security guard on the other side of the boundary rope. He controlled one past third man for four the very next ball.

Despite the fast start by the Stars, the Heat persisted with the pace bowling, putting Steketee in for another over that went for three more boundaries.

With the Bash Boost target just 68 runs, the Stars were more than halfway there (48 runs) at the end of the first four-over Powerplay - with 33 of those runs coming off the bat of Englishman Clarke.

Swepson came on as the fielders were pushed out and slowed the chase to singles and twos.

However, the runs continued flowing when Neser came on from the other end.

With one point to their name at the seven over mark, the Stars pressed on to improve their net run rate as much as they could, Clarke sending Swepson to the boundary multiple times an over.

Clarke passed 50 runs for the fifth time this tournament, the first man to get there in BBL|11, highlighting a consistent season from the 25-year-old.

Stars head coach David Hussey was understandably much happier with his side's higher-energy, aggressive contest at the MCG.

Speaking on the broadcast after Melbourne took the Power Surge at the 10 over mark, Hussey said the men in the middle had earned the right to take on the two overs after an exceptional bowling innings and a strong start with the bat.

"They've earned the right to take that surge and enjoy providing a bit of entertainment for this crowd and hopefully win the game pretty early.

The Power Surge was taken immediately at the 10 over mark "just to kill the game early, really," Hussey said.

Maxwell and Clarke did not survive the surge, as the Stars lost two for 20, however, Hilton Cartwright and Marcus Stoinis continued on making runs for the Stars.

It was an absolute smashing in the end, Cartwright (16* off 7) and Stoinis (29* off 10) whacked the Stars to an eight-wicket victory with six overs to spare.

The Heat are back in action tomorrow night, hosting the Scorchers at Marvel Stadium, while the Stars return on Wednesday evening for the final regular match of the season.