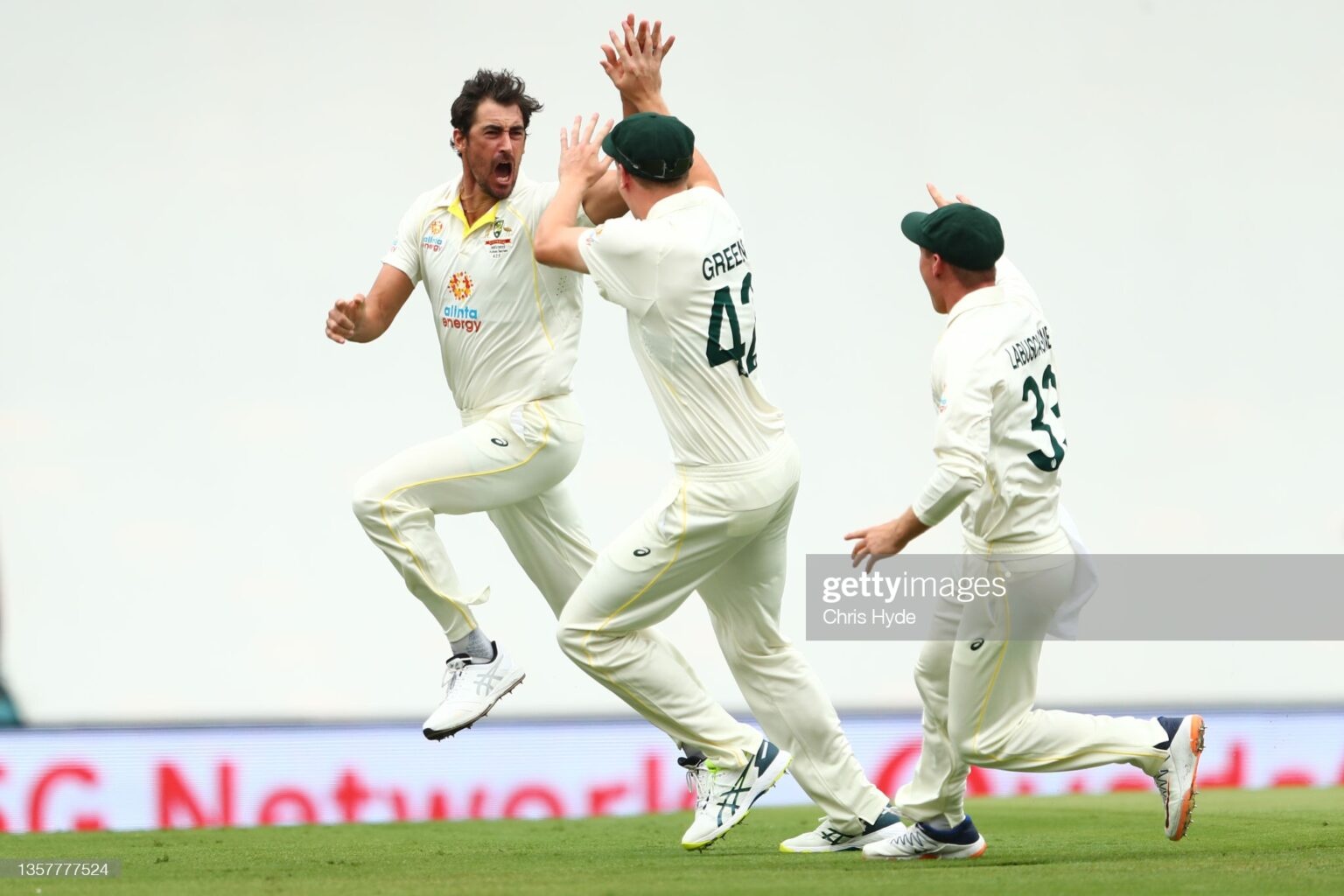 Mitchell Starc is having a great start to the Ashes for Australia, leading the attack well in the first two test matches, as the Aussies are 2-0 up.

Mitchell Starc is having a great start to the Ashes for Australia, leading the attack well in the first two test matches, as the Aussies are 2-0 up.

Justin Langer praised the bowling group of the Australian test cricket team, while reserving a special mention for Mitch Starc in the aftermath of the second Ashes test, where Australia defeated England by 275 runs.

Leading into the Ashes series, there were questions as to whether Mitch Starc was the best bowler for the job, or whether his form merited selection. Those questions were answered within the first ball of the series, as Starc took the wicket of English opener Rory Burns.

Starc, along with Josh Hazlewood, Pat Cummins and Cameron Green made light work of the English side in the First Test, and were primed for a big series.

The Australian fast bowling group was thrown into chaos in the hours before the Adelaide test began, as Pat Cummins was deemed a close contact of a positive Covid-19 case and forced to isolate, ruling him out of the test. Jhye Richardson had already been elevated to the team, with Josh Hazlewood ruled out with a side strain.

Michael Neser, the perennial 12th man of the past few years was added to the team to make his Test debut, stepping in for Cummins.

It meant that Starc went from being a strike bowler to the leader of the attack, leading the debutant Neser, and Richardson, who had been out of test cricket for two years.

Langer told media that Starc had excelled in the match.

"I thought Mitch Starc was almost man of the match last game, his consistency, [there's] been a lot of talk about Mitch Starc the last few years, but he just keeps turning up," Langer said.

"He's an unbelievable athlete, he's incredibly fit. Again, he's another one who's much loved around the team, and his resilience to just keep coming up over and over and over again is remarkable.

"His consistency of length and the way he controlled the tempo of the game last game was a credit to him, particularly with Patty [Cummins] and Josh Hazlewood not playing, he became the leader of the group, and did a fantastic job."

Langer confirmed that Starc was expected to play, despite a niggle that appeared to be troubling him late in the test match.

"I'd be very surprised if he doesn't play," he said.

Langer also noted that with Scott Boland being added to the squad, the Australians don't lack depth of fast bowling.

"After the test match we had, a five-day test match, we are going to wait and see how Josh Hazlewood pulls up, he arrives this afternoon to the squad, and also how Michael Neser and Jhye Richardson pull up, and Mitchell Starc as well," Langer explained.

"It's more precautionary than anything else, that said, he's a terrific bowler, and he's had an awesome domestic couple of years, so if he [Boland] gets the opportunity, like Michael Neser last game, he will certainly deserve that.

"Both Michael and Jhye did a great job in the last test match, so we will wait and see how they pull up.

"We've got back to backs, it's a tough series... five tests pretty much in a row, so we'll just manage our bowlers as best we can, and put our best, most fit and ready to perform group out on the park."

Langer will be comforted knowing that even in the absence of two of his first-choice bowlers, he can field an attack that can take 20 wickets, and win a test match by 275 runs.

"It's nice to have this nursery of bowlers we know can perform in Test cricket," Langer quipped.

England, who are 2-0 down in the series, appears to be at a crossroads. Their selection decisions have not paid off so far, with Rory Burns and Haseeb Hameed struggling to fire with the bat, and Chris Woakes struggling with the ball.

The English are expected to make selection changes ahead of the Boxing Day Test, but those changes have not been confirmed.