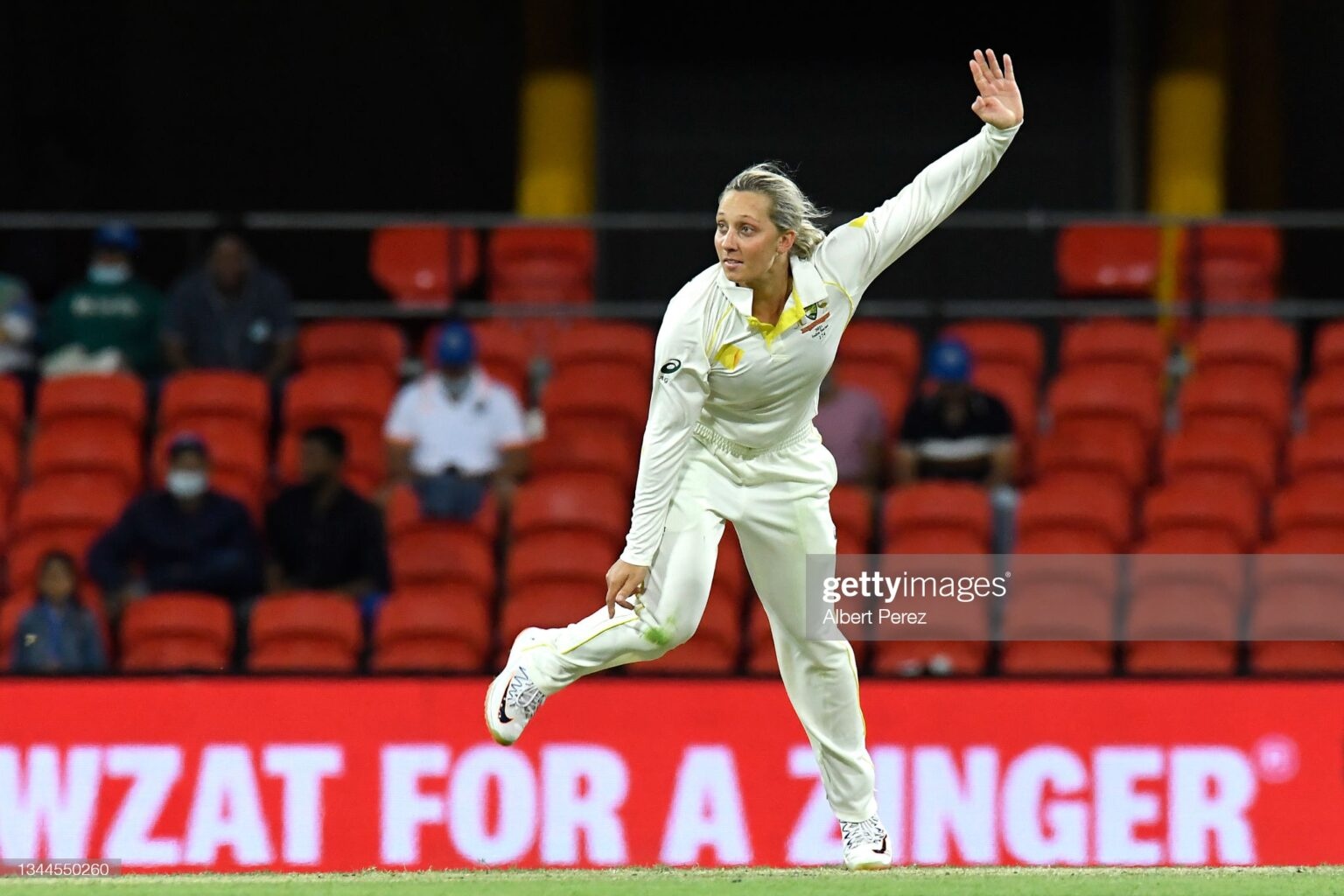 Mitchell Starc and Ash Gardner have taken home the headline awards at the Australian Cricket Awards, but there were a number of deserving winners.

Mitchell Starc and Ash Gardner have taken home the headline awards at the Australian Cricket Awards, but there were a number of deserving winners.

Mitchell Starc capped a five test summer and a big Ashes win, and a successful T20 World Cup campaign by being named the Allan Border Medalist for 2021.Ash Gardner was recognised for her strong performance across international series against India and England to be named the Belinda Clark Medalist.

A stack of award winners were recognised by Cricket Australia, withsome awards being announced in the last few days.

Gardner has been consistent across all formats with the bat and ball, as she has emerged as one of the leading allrounders in world cricket.

The all-rounder has posted 281 runs across ten innings, averaging just over 35 with the bat, including four half-centuries over the past 12 months.

Gardner also took nine wickets, putting her inside the top three run-scorers and the top five wicket-takers during the voting period.

The 24-year-old is having a strong performance in the Ashes Test being played at the moment, scoring 56 from 74 balls in the first innings, and taking 1/27 from nine overs during England's first innings.

Gardner spoke after being named the first First Nations person to be awarded the Medal.

"It's obviously a very big honour to receive the award," Gardner said. "I never would have thought that I'd be a recipient of it, and to be the first-ever First Nations player to win it is also a huge honour.

"I've always spoken about, for young aspiring First Nations kids wanting to play cricket, they need role models. I think in the past, there haven't been those role models for those kids to want to look up to - and you can't be what you can't see - and I think now that there are more First Nations players coming through, it's an absolute honour to be a role model for those kids and hopefully, encourage them to want to play cricket."

Gardner explained that her progress over the past two years had fueled her to her current form.

"I think it's been a mixture of things, obviously I've probably matured quite a bit off the field, which I guess has had an impact on the field as well.

"I feel really comfortable within this side, and I've known what my role has been and I've been really clear in the direction that I need to do when I go out to the middle with the bat or ball in hand."

Gardner also said that being an all-rounder gave her three facets of the game to have an impact, which often helped centre herself.

"That's the beauty of being an allrounder is you have to try and work on all three skills a lot of the time, and sometimes you can get caught up in one.

"Some days, when you have a good day bowling and you're fielding, and you're feeling all on, but not all the time."

Gardner and the rest of the Australian team will be hoping to secure a result in the Ashes Test match tomorrow before the ODI matches next week.

Starc is a first-time winner of the award, and picked up 43 wickets across all three formats of international cricket, 12 more than any other Men's player. Starc averaged 24.4 across those wickets, and also chipped in 241 runs at an average of 26.8.

He has contributed across all three formats, including a key role in the successful T20 World Cup campaign, a strong performance against the West Indies in the ODI series, and a dominant Ashes series.

Starc was humbled to win the award, after a difficult two years for him off the field.

"It's a reflection of the support base that I've had throughout those two years as well," Starc explained.

"There've certainly been times where I didn't play my best cricket, and certainly times over those two years where I probably didn't want to play any cricket, so I'm very thankful for my support networks, in particular Alyssa, my wife, to not only have to play cricket at the highest level, to be there to support me as well, and I can't thank her enough for that."

Starc paid further tribute to the support networks that helped him be in a position to win the award.

"I've got a wife who plays at the highest level and I've got a couple of my closest mates, as I've said, who play international cricket, so I've got a pretty good sounding board in that regard.

"I've obviously got a lot of respect for the opinions in our change room."

Starc talked about the physical preparation that had set him up to play a key role in the Ashes, and in the international series before that.

"It's about doing the work. You do it behind the scenes that no one sees, ad work and put in with the [Strength and Conditioning COaches] and time spent with physios.

"Looking back at m preparation and looking after my body and things I did too, whether it be through quarantine periods or in terms of physical preparations for long summers, there are things that I guess you can look back on and say that they were the right things.

"So in part with that, it's a huge thanks to the support staff there, particularly David Brinkley, and the physios, to keep me on the park for five test matches and let me play five."

Starc is a first-time recipient of the Allan Border Medal, but it wasn't the only award that he won. The two awards are a nice early birthday present for the bowler, who turns 32 tomorrow.

Starc was also recognised for his white-ball performance, taking home One Day International Player of the Year. It was an exciting award for him, as his wife, Alyssa Healy also won the award, making it three in a row for her.

Healy's continued recognition comes off the back of strong performances behind the stumps, as the Australians, at one point, had reeled off 26 wins in a row in the format before losing to India over the summer.

Healy finished ahead of stars Rachael Haynes and Megan Schutt, after performing strongly with both the bat and the wicket keeping gloves.

Starc finished ahead of Matthew Wade, Adam Zampa and Alex Carey (tied for third), who all played key roles for Australia in the series against the West Indies.

The award continues a golden period for Head, who was awarded Domestic Cricketer of the Year and finished third in the Allan Border Medal.

Head was named the Miller/Compton Medal for Player of the Series and was twice named Player of the Match during the Ashes series.

Head led all run-scorers with 357 runs at an average of 59.50, and alongside Usman Khawaja, was the only player to register multiple centuries in the series.

Head finished ahead of Scott Boland and Mitch Starc in the voting for Test Player of the Year, reflecting the strong series that the Australian fast bowlers had.

Beth Mooney was crowned T20 International Player of the Year ahead of Tahlia McGrath and Gardner. Mooney stacked up six T20 matches in 2021, amassing 160 runs at an average of 40, with a strike rate of 116.

Mooney is also renowned for her fielding, including her daring slips work, which has also been on show during the Ashes Test.

Although not relevant for voting purposes, Mooney was recognised for her T20 performances as she led the Perth Scorchers to a victorious WBBL campaign as well.

Mooney is also currently playing in the Test match against England, playing with a surgically repaired jaw that was broken less than two weeks ago.

His performance in the final, which earned him Player of the Match honours was a snapshot of his impact across the tournament.

Marsh hit 77 not out, as the Australians chased down 173 with more than an over to spare, including a six from his first ball.

After he launched his first delivery 20 rows behind deep square leg, he punished the next two to the boundary, setting up an innings that would prove championship-winning.

Marsh's T20 World Cup campaign was so highly regarded he finished second in the Allan Border Medal voting, just one vote behind Starc.

Zoe Cooke of the ACT Meteors has been named the Community Champion Award winner, for her work supporting women's cricket in the ACT. Cooke plays a key role in mentoring and supporting pathway and elite athletes.

Cooke is also known for her work supporting the Grizzly Bear Adoption Program for the World Wildlife Foundation, Breast Cancer Awareness Month and the One Foot Forward Challenge for the Black Dog Institute.