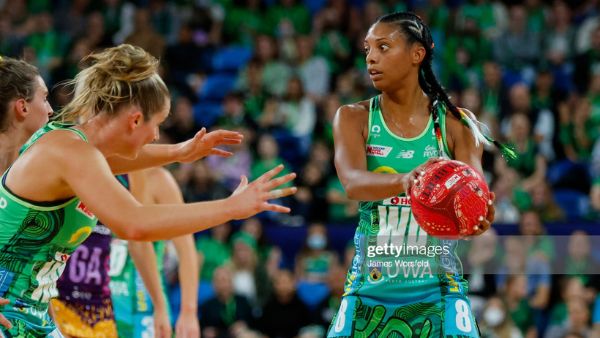 Stacey Francis-Bayman has been a key member of the Fever since she joined the club back in 2017 and on the weekend, she’ll play in her 100th game against the Thunderbirds.

Stacey Francis-Bayman has been a key member of the Fever since she joined the club back in 2017 and on the weekend, she’ll play in her 100th game against the Thunderbirds.

Stacey Francis-Bayman has been a key member of the West Coast Fever since she joined the club back in 2017 and on the weekend, she’ll play in her 100th national level game against the Thunderbirds.

What makes the milestone even more special for Francis-Bayman is that out of her 100 national appearances, 91 have been in the green dress while nine of her 100 international caps came from her time at the Canterbury Tactix in the ANZ Championship from 2011-2012.

While Francis-Bayman hasn’t gotten to the ultimate success yet, one of her highlights has been hosting the 2018 Super Netball Grand Final in Perth when the Fever took on the Sunshine Coast Lightning.

“Over the years, I find different things that I've learned about myself on courtand I think my like latest cheesy answer to this question is that I don't think I've had that highlight yet. I'm hoping to finish this year with an SSN Premiership and then to go on to bigger and better things with the Roses, fingers crossed.”

Over the season, Francis-Bayman has learnt to stop and smell the roses and soak up as much of her career to date as possible and that will include having her milestone game in front of the Green Army this weekend.

“I didn't know that necessarily 100 games was going to be possible. it's all dependent on whether you have the opportunity to get out there on court and to own a position.

“I feel like this season has been another roller coaster to be able to have been involved in every game so far this year is incredible and for it to culminate in 100 games.

"I think when you have been playing netball for as long as I have, I’ve certainly been trying to stop and to take a moment and recognise you know, the fantastic things that I have achieved so far and just to sit in those as opposed to being so forward focused and goal driven.

“So, I will absolutely relish every single second of being able to walk out in front of a home crowd this weekend. In the last round game of 2022 season.”

25 YEARS OF THE ADELAIDE THUNDERBIRDS: ERIN BELL ON OPPORTUNITIES AND PREMIERSHIPS

While being a key player of the West Coast Fever line-up, there’s still a lot for Francis-Bayman to learn, with the English Rose making the move from generally a circle defender to out in wing defence.

“I think well the past couple of seasons. I've obviously been on the wing defence a little bit more than I have in the circle.

“Your job is over very quickly if you don't so a very good job and so I think this season I've worked really hard on my footwork,my agility and my angles and I feel like that pays dividends in terms of being able to be a player that is able to like to play an isolating role and shut down my opposition.

“Something that I've also been working really hard on which probably hasn't necessarily come completely to fruition yet is being able to get some more ball in hand off my own play and within the unit around us.

“I think it's pretty cool to have been playing for so long but also finding ways to challenge myself and improve in any position in any way that I'm able to get on the court and contribute. I absolutely throw myself at that challenge and equally, to be able to support my teammates on the sideline if that's the role that I'm meant to play is a privilege as well"

When it comes to the legacy that Francis-Bayman wants to leave on the game, it’s not just about her achievements on the netball court but all the work she’s done off the court as well.

“I think what I've come to realise is I have a really great story, I have had an incredible journey and I think I have real confidence and ownership around the person that I am and what I stand for.

“So I've been very mindful over the past couple of seasons to really step into that advocacy space, you know, to push and being proud of being a member of the LGBTQ+ community, having like incredible pride and ownership over my mixed race background and diversity.

“I think it's been it's been part of the journey and a nice by-product that I think has come about with netball becoming bigger and more commercial that I wouldn't I would never have thought about 10 years ago.”

The West Coast Fever will face the Adelaide Thunderbirds at RAC Arena on Sunday afternoon.