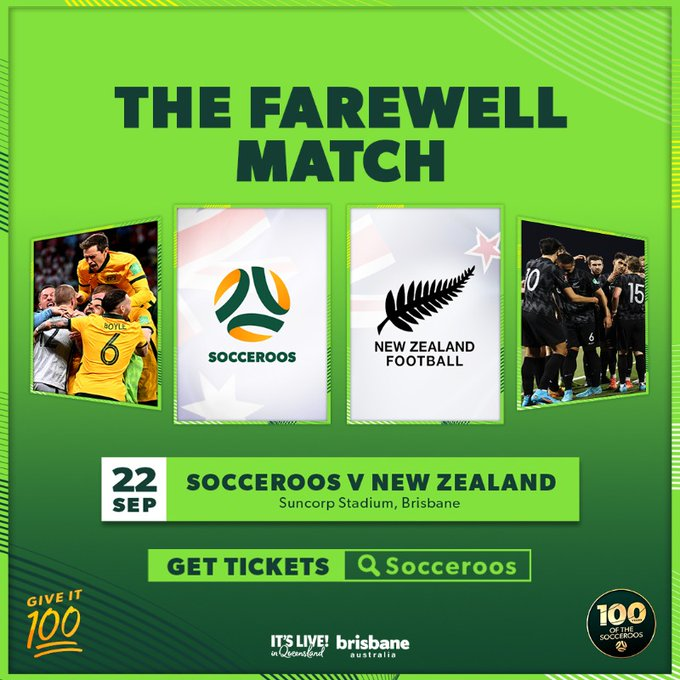 Graham Arnold today named a 31-man squad for the upcoming fixtures against New Zealand, with some shock inclusions and exclusions.

Graham Arnold today named a 31-man squad for the upcoming fixtures against New Zealand, with some shock inclusions and exclusions.

It was in Dunedin, New Zealand, where the first-ever 'A' international match for Australia occurred when the Socceroos played New Zealand in 1912. A year later, both sides faced each other again for the Socceroo's first game on home soil.

Whilst the Socceroos will head to Qatar for the World Cup, The All Whites fell at the last hurdle. They will not travel to the Middle East.

Graham Arnold has held the door ajar for some players to take a late run at securing a spot in the World Cup squad. Central Coast Mariners forward Jason Cummings has been selected, alongside 17-year-old teammate Garang Kuol. One surprise was that Garang's older brother, VfB Stuttgart striker Alou Kuol, was not selected.

Keanu Baccus, Cameron Devlin, Ryan Strain and Tyrese Francois will also join the Socceroos' squad for the first time. All four players were a part of the Olyroos squad in the most recent Olympics.

Graham Arnold can't wait to get back into camp. The Aussie coach couldn't hide his excitement at the sheer number of youngsters breaking through at the top level worldwide.

"This camp is the last opportunity we will have to work with the squad ahead of November's FIFA World Cup Qatar 2022™ tournament. All players are competing for a spot in the final squad, which will be announced in early November."

"This camp provides us with a unique opportunity to bring in some new players who can push for selection ahead of the FIFA World Cup™."

Elsewhere, veteran goalkeeper Mitch Langerak has come out of international retirement to be a part of this squad. An opportunity to play in a World Cup is too big to pass up.

"I am humbled and honoured to be given the opportunity to represent the Socceroos again. It's been a difficult few years for all of us. When I made the decision to retire, we were in the middle of strict lockdowns in Japan. I was facing the prospect of spending months away from my wife and young children.

"So, I had to make the hard call to step away from international football for my family. I am grateful for another opportunity. It was tough watching the team from afar, and I was so happy for everyone when we qualified for the FIFA World Cup™," he said.

There was no place for Tom Rogic in the squad. The former Celtic midfielder has only just signed a deal with new club West Bromwich Albion. Rogic is not believed to be match fit.

With the centenary celebrations being a big part of this friendly series, Football Australia convinced arguably Australia's best tournament coach, Guus Hiddink, to return to the touchline in Brisbane.

On the day of the fixture, Football Australia will also announce the list of players selected for the Socceroos' 'Team of the Century'.

The Socceroos take on the All Whites from 7.30 pm in Brisbane before facing the NZMNT just a couple of days later in Auckland at 12.30 pm on Sunday.