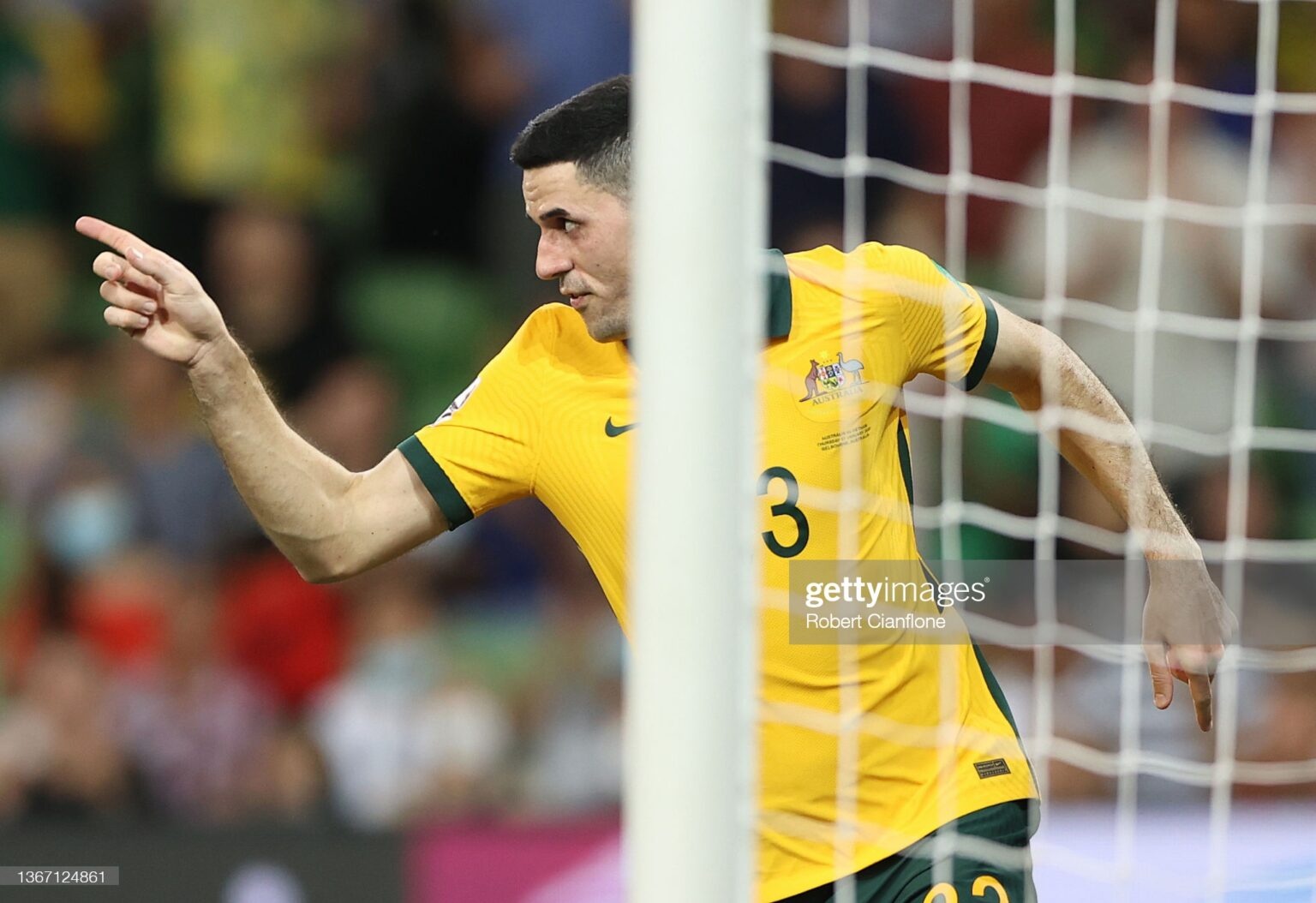 The Socceroos were able to overcome poor weather, a coach with Covid-19 and a physical opposition to overcome Vietnam 4-0 in Melbourne.

The Socceroos were able to overcome poor weather, a coach with Covid-19 and a physical opposition to overcome Vietnam 4-0 in Melbourne.

A 4-0 win over Vietnam has put the Socceroos in pole position for World Cup qualification on a wet night in Melbourne.

Despite missing coach Graham Arnold, who is in isolation after testing positive for Covid-19, the Socceroos were ready to play when they arrived at the ground.

The Socceroos started the night with a clear show of intent, putting the ball in the back of the Vietnamese net within 20 seconds.

Tom Rogic had a clean strike from the top of the penalty area, but Jackson Irvine was adjudged offside and having interfered with the keeper, so the goal was disallowed by VAR.

The Socceroos continued to pepper the Vietnamese goal, while the Vietnamese played a physical style of defence that is sure to leave some bruising on Aaron Mooy and Rogic.

Matthew Leckie was electric down the right-wing, using his pace and physicality to penetrate into the deep third repeatedly.

It was a Leckie probe and a Rogic cross that combined to finally open the scoring. Rogic found an unmarked Jamie MacLaren, who was able to head down into the bottom right corner past the keeper.

MacLaren's goal brought a sense of relief to the Socceroos play, as they now had the lead. But the lead wasn't enough, and the Australians kept the foot down.

A vicious counterattack in added time in the first half saw the Socceroos take the ball from end to end so fast the broadcast couldn't keep up, and by the time it did. Rogic had planted the ball in the back of the net to double the advantage.

The play had started when Rogic took a quick free-kick and sprinted down the field to push the pace. It ended with a calm finish past the keeper that showed all the class of the Celtic midfielder.

DEBORAH-ANN DE LA HARPE: IN THE FORM OF HER LIFE

The heavens opened in the second half, and the Vietnamese defence became like wet paper, as the Socceroos continued to attack, but were unable to find the goal.

The Vietnamese side found a counterattack, and peppered the Australian goal, looking every chance of scoring before Mat Ryan showed off his ability between the posts.

The Socceroos continued to show off their counterattacking skills, as the substitutes came on and injected pace and energy into the midfield.

Craig Goodwin, and then Riley McGree showed their value as substitutes, as they found the back of the net in the 72nd and 76th minute respectively, moments after each of them came on.

The Socceroos continued to attack all the way to the end of the match, as Marco Tilio threatened to join Goodwin and McGree in scoring his first international goal.

Tilio looked good in his short cameo in his international debut, continuing his strong form for Melbourne Victory recently.

Goodwin spoke to the broadcast after the game about the emotions of his first score.

"Very rewarding, kind of lost for words. For me personally, it was a great moment, but there's a lot of emotion that goes into it for me," Goodwin said on the broadcast after the game.

"It's very rewarding for me and for my family."

Goodwin paid tribute to the opposition but was happy with the team performance on the night.

"All credit to Vietnam, the second half they came out and had some chances.

But we came out and played well and we took our chances."

Stand-in Socceroos coach Rene Meulensteen also spoke to the broadcast after the game, about his view of the team's performance.

"I can't be more pleased with the energy. We knew it was going to be challenged because that's what international football is about.

The Socceroos will play Oman in Oman on Wednesday 2 February as they continue the path to qualification for the World Cup in Qatar later in the year.