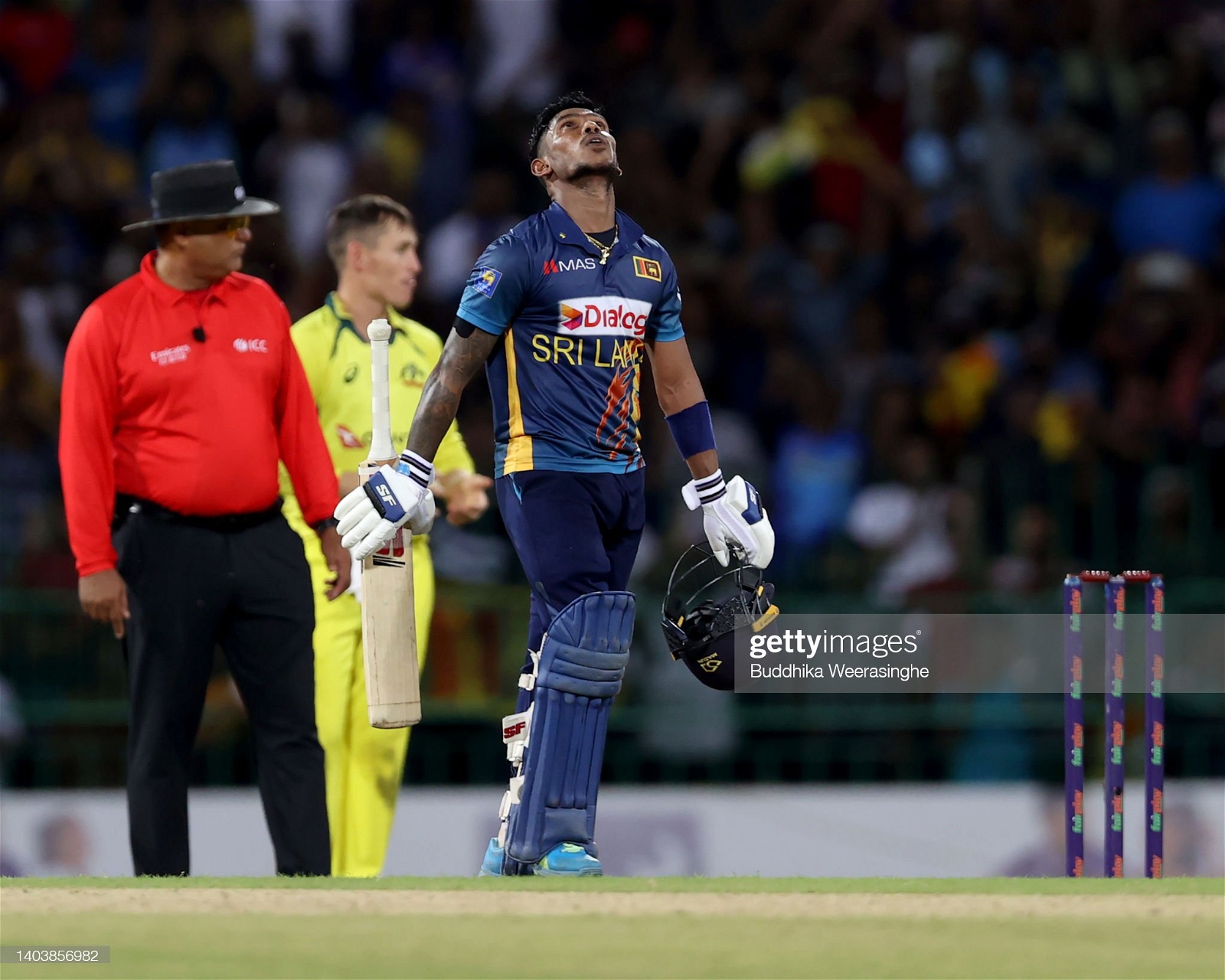 Injuries aplenty as Pathum Nissanka gets Sri Lanka the win

An injury riddled Australian team was not able to get past Sri Lanka in Colombo thanks to a wonderful century by Pathum Nissanka to get the hosts an easy chasing victory.

Injuries aplenty as Pathum Nissanka gets Sri Lanka the win

An injury riddled Australian team was not able to get past Sri Lanka in Colombo thanks to a wonderful century by Pathum Nissanka to get the hosts an easy chasing victory.

After losing the second ODI of the series the Aussies needed to bounce back and claim a win after moving back to Colombo. It wasn't to be though with the bowlers just not able to make breakthroughs in the middle overs.

Australia were going in yet another player down with Steve Smith pulling up sore after the last match. His injury now pushes the list of those on the sidelines to 7 with a couple of those already on planes home to Australia.

Smith will likely be rested for the rest of the series while he prepares for the Test matches while it's expected Mitch Starc will be back for the fourth match. Worryingly during this match Glenn Maxwell also pulled up slightly sore with a hamstring, hopefully, all is well on that front.

But let's move on to the action, Aaron Finch won the toss once again but this time he decided to have a bat first. It didn't pay off that well though with David Warner getting a top edge out to fine leg when he was on only nine.

Importantly Aaron Finch looked good through his innings pushing the ball around for plenty of ones as twos. In fact, only 30 of his 62 runs came in boundaries, an awfully low amount for the Aussie skipper.

Australia got into a little bit of trouble through the middle overs, their slow scoring and consistent wicket loss meant there was plenty of pressure on Finch as he watched wickets fall at the other end.

Finch eventually did go a couple of overs after Marnus Labuschange to one of the greatest slips catches you will ever see. Australia were then in a precarious position at 4/121 from 27 overs, needing the South Australians to turn the innings around.

The two South Australians in Alex Carey and Travis Head would need to perform well, and perform well they did. Head struggled early against the spin while Carey got the broom out to essentially sweep every ball.

It was a combination that worked perfectly with Carey able to get boundaries from spin and Head saving himself for an onslaught against the quicks.

The onslaught from Head did begin at about the 40th over but Carey wasn't to join him after he wasn't given out LBW to a good length ball. Not even a review could save him, but the wicket did bring Glenn Maxwell to the crease who was ready to bring some fireworks.

Head took 17 from his first 30 balls but then went bang hitting 53 from his next 35 alongside Maxwell who took 33 from 18 to set up what should have been a match-winning score. Cameron Green came in late and launched a six to finish with 15 runs of his own.

Australia posted 6/291 from their 50 overs, on a pitch that was spinning it looked like a solid total but the win wasn't theirs to take.

Australia were going into the bowling innings well under strength playing only four full-time bowlers. It would be up to a combination of Glenn Maxwell and Marnus Labuchange to bowl the remaining 10 overs of the innings.

Sri Lanka started well with the bat as they have done in every match of this ODI series. Dickwella brought the aggression at the top of the order that he's known for while Nissanka pushed the ball around working himself in. The first wicket came when Maxwell got the arm ball into the stumps of Dickwella who was trying to cut through point.

Australia had to wait a long time for another wicket to fall, in fact, it was almost 40 overs until the next one fell. The pair of Nissanka and the in-form Kusal Mendis did nothing crazy but they just did enough to keep up with the run rate.

The pair pushed the bowlers around the park taking six or seven an over with the occasional boundary. It wasn't the most entertaining cricket but that was all that was needed. Jhye Richardson was the only bowler that managed to get away going for less than six an over.

The Sri Lankan pair pushes the score past 100 and then past 200 but the physical toll was huge. By the 35th over both players were experiencing severe cramps. It got to the point where Mendis had enough and had to come off retired hurt after his 87 from 85 balls.

His coming off the field didn't matter though with Nissanka and Dhananjaya de Silva increasing the run rate and hitting the part-time spin of Maxwell and Labuschange all around the ground. By the time de Silva fell only 37 were needed from 6.4 overs.

A couple of more wickets fell with Richardson bowling a particularly good 48th over, but by then it was too late. Nissanka couldn't quite finish the innings off, he was gone for 137 from 147 but that was more than enough.

Sri Lanka won by six wickets to take a 2-1 lead into the fourth match of the series which will begin on Tuesday night Aussie time. The chase was also the largest on this ground by Sri Lanka.

But at the end of the day, we have to celebrate Pathum Nissanka for scoring his maiden ODI century and getting his Island nation home. Going forward Australia needs to focus on full-time bowlers or at least pick their best side. The good news is Mitch Starc should be back for the next match.