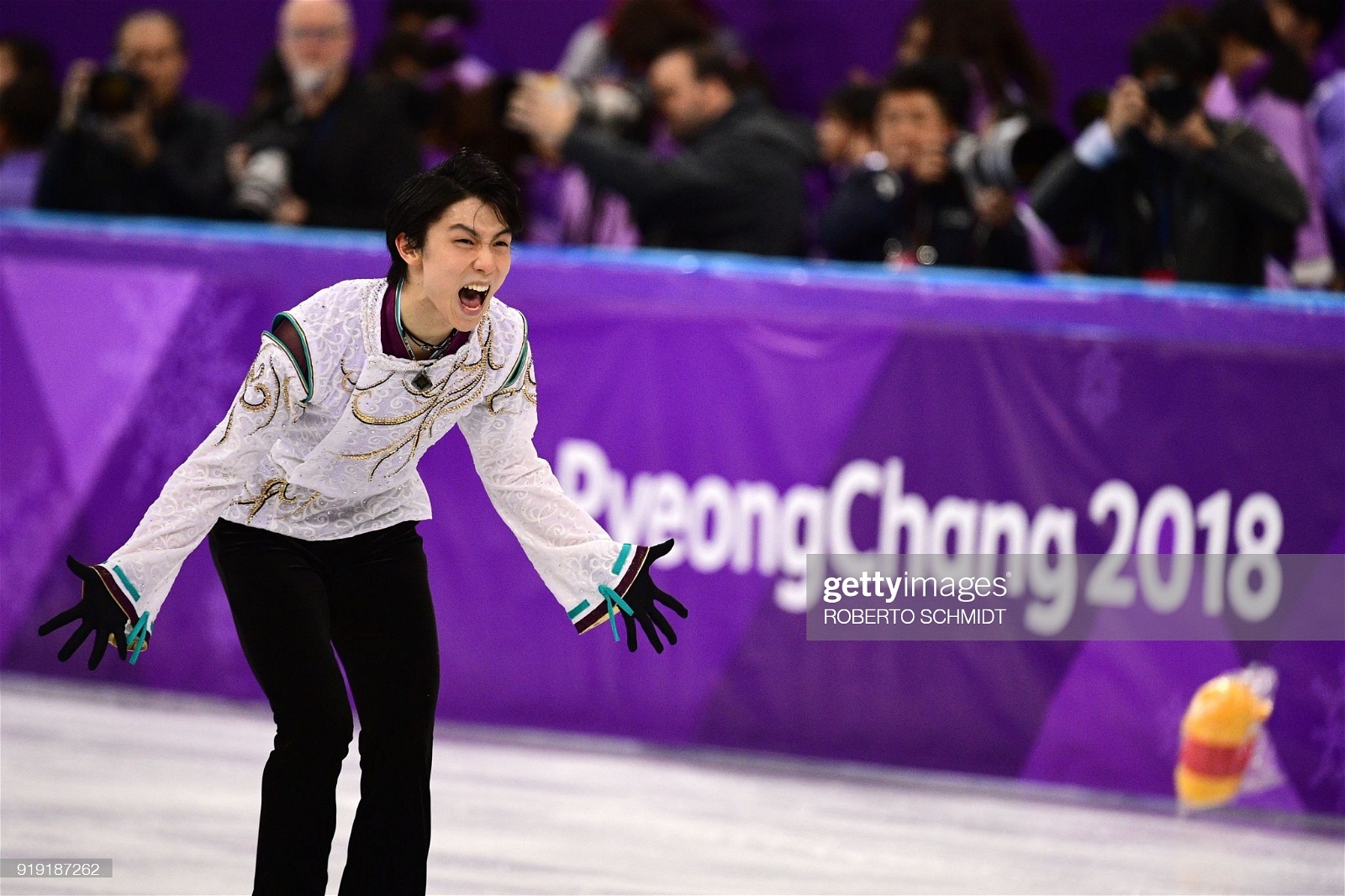 From Yuzuru Hanyu's second gold medal in 2018, to the Miracle on Ice in 1980 the writers at Edge of the Crowd go through their top Winter Olympics moments.

From Yuzuru Hanyu's second gold medal in 2018, to the Miracle on Ice in 1980 the writers at Edge of the Crowd go through their top Winter Olympics moments.

From Yuzuru Hanyu's second gold medal in 2018, to the Miracle on Ice in 1980 the writers atEdge of the Crowdgo through their top Winter Olympics moments.

Most skaters would be satisfied with one Olympic title but not Yuzuru Hanyu. Ever since he was young the Japanese skater has been talking about winning two consecutive Olympic golds, even though the last time a male skater won back-to-back Olympic titles was when American Dick Button did so in 1948/1952.

Hanyu was dissatisfied with his performances at Sochi in 2014; for him it was not enough to win just because he made the least mistakes in an event full of errors.

Going into the 2017-18 season, he seemed a sure bet to win his second Olympic gold. He was the world record holder in the short program, free skate and combined total scores.

And then he injured his ankle. Hanyu withdrew from the rest of his competitions, and it was uncertain if he would even recover in time for the Olympics.

At Pyeongchang, he performed a flawless short program, and a couple of shaky landings in the free skate was not enough to push him off the top spot.

Hanyu is now aiming to make history once again becoming the first skater to land the quadruple axel, and maybe win a third Olympic gold along the way.

When we're talking about the Summer Olympics, particularly in the pool, we often need reminding that an Australian Olympic silver medal is nothing to scoff at. That's not the case at the Winter Olympics with Aussie medals few and far between.

Graham started with a ninth-place run in the first run of qualifying, with the top 10 finish sparing him from having a second qualifying run.

In the 20-person final the Australian finished second in the field, scoring 81.39 points and when the field was cut to 12 he scored 80.01 to sit in fourth ahead of the Super Final.

It was a long wait at the bottom of the hill for Graham and for Australians at home, hoping the Gosford born Australian would come home with a medal.

Graham's run scored 82.57 to sit in first with three athletes remaining. After American Casey Andringa's run, it was confirmed that he would take home at least one and after Kingsbury's final run it was going to be either silver or bronze for the Aussie and it was the superior air score that kept Graham ahead of Daichi Hara to win silver.

The now 27-year-old Graham heads to his third Olympics in Beijing with Australian's hoping his return to competition after breaking his collarbone earlier in the season will be a successful one medal or not.

The cute as heck cartoon mascots from Sochi 2014

While their names were not very imaginative like most other countries, the way they became the mascots was quite original.

A call-out for character designs was made, and over 24,000 submissions were received.

A range of characters created by various artists were selected from the massive pool and put forward on a series of television events calledTalismaniya.

In the final episode, which was live, the Russian public could place their votes for their favourite.

Leopard, designed by Vadim Pak, scored 28 per cent of the votes; Polar Bear, designed by Oleg Serdechniy, was second with 18 per cent; and Hare, designed by Silviya Petrova, was third with 16 per cent.

A jury decided Ray of Light and Snowflake would be the Paralympic Games mascots.

The pair invented the sports of ice sledge hockey and wheelchair curling, and became great friends.

Although I was only nine when Lydia Lassila won gold in Vancouver back in 2010, it wasn’t until years later watching her documentaryThe Will to Flythat I truly recognised how brilliant that moment was.

While the moment in itself was brilliant when Lassila landed a back/lay-full-full to claim her first-ever gold medal and become Australia’s fifth Winter Olympic Champion. It was the journey that it took for her to get there that made it even more special.

Four years prior, in 2006 a water jump accident almost put an end to her 2006 campaign and although she was able to go to the Olympic Games in Torino in 2006, her knee gave way putting an end to her Olympic campaign.

After the setbacks to see Lassila finally get that gold medal four years later in Vancouver was something super special to see and that's why it goes down as one of my favourite Winter Olympic Moments.

Vancouver 2010 is the first Winter Olympics I remember watching and I remember it for one specific reason: Torah Bright winning gold in the women’s halfpipe.

At the Opening Ceremony, Bright was Australia’s flag bearer, she qualified first for the final and, despite her two concussions and eighth World Cup ranking leading into the Games, she had the pressure of a nation on her.

And at first, it appeared she might have crumbled. Bright crashed in her opening run in the Final, scoring just 5.9, and had to go first with her second run.

She’d twice attempted a backside 540 McTwist during the competition and bombed out, but in her final run Bright nailed it. Landing the trick in the pipe earned her a total score of 45.0, which survived as the highest score for the night.

Bright’s gold was Australia’s first on the snow, after success on ice in prior Olympics. She also contributed to the country's best medal haul alongside Lydia Lassila (gold - aerials) and Dale Begg-Smith (silver - moguls).

ASCENDING OLYMPUS – EIGHT DAYS TO GO UNTIL BEIJING 2022 KICKS OFF

American snowboarder Shaun White claimed his first gold medal in the halfpipe discipline at his debut Winter Olympic Games at Torino 2006, at just the age of 19. He completed the feat once again at Vancouver in 2010, defending his gold medal from four years prior.

A competitive athlete in the highest order, White wasn’t able to repeat his efforts in Sochi 2014, leaving the Games without a medal, unable to complete a hattrick. He did however, win gold in the event at PyeongChang 2018 - his third gold medal, and the USA 100th Winter Olympics medal overall - with a record time of 97.75.

Steven Bradbury won the Semi-Final of the short track 1000m speed skating in a time of 1:29.189. It was enough to book a place in the final, but it was almost a second and a half slower than the slowest finisher in the other final.

It set the stage for Bradbury to come in as a major underdog for the final.

And as the final played out, it was going to plan. Bradbury found himself out of the action with two turns to go, metres behind the frontrunners, who were all jostling for position.

As they came round the final bend, the leaders were jostling too hard, and slipped out, taking each other out in almost comical fashion.

Bradbury swept through to take the gold, the look of disbelief clear on his face. The first gold medal for Australia at the Winter Olympics had come from the most unlikely scenario.

It was a moment that has lived in Australia’s collective sporting memory since, a moment of shock, and of joy. It has become a verb in Australia, to “do a Bradbury”, to pull a victory out of nowhere.

A moment in time that is memorable for all the wrong reasons, the Nancy Kerrigan and Tonya Harding incident is brought up every four years alongside Torvill and Dean when figure skating is brought up.

However, making her return just weeks after the attack at US Nationals at the 1994 Winter Olympics in Lillehammer, Kerrigan produced two incredible skates to win her second Olympic medal, going one better than her first Olympics appearance two years earlier in Albertville.

Leading after the short program, Kerrigan's closest rival, Ukrainian Oksana Baiul was the only athlete capable of beating then 24-year-old Kerrigan and it was going to be a tall order with Kerrigan skating a beautiful free skate.

Baiul did just that, winning Ukraine's first Olympic gold medallist in any sport.

The drama didn't end with the competition with Kerrigan's irritation visible on the podium as she received her silver medal.

It was a made for movie moment coupled with Tonya Harding's broken lace incident in the free skate and in 2017 director Craig Gillespie did just that with the black comedyI, Tonya.

Jamaica, you have a bobsled team!

They may not have a medal yet, but the Men’s Jamaican bobsleigh team hold the title for one of the most iconic moments in the Winter Olympic Games’ history.

The two-man team placed 31st, while the four-man team earned a ‘DNF’ result. The quartet crashed during their third run, leaving them unable to compete in the final run. Of the event.

Events in these games inspired the 1993 Disney movie ‘Cool Runnings,’ which has since gone on to be an iconic, memorable sports movies.

It is also important to note, Jamaica entered their first women’s bobsleigh team in PyeongChang 2018.

For a country without ice or snow, Jamaica has certainly left their mark on the Winter Olympic Games.

The USA men’s ice hockey team produced one of the greatest results of the 1980 Winter Olympics in Lake Placid in New York, upsetting the Soviet Union- four-time defending gold medal team - in the semi-final of the tournament. The USA team, who had gone through the tournament undefeated, was primarily made up of amateurs while its opposition had international experience.

The USA was trailing 2-3 after the second period, but ended up winning the game 4-3 as the team’s goalie Jim Craig made some stunning late saves, even as the Soviet Union was coming hard and shooting from everywhere across the rink, trying to find a score.

The nature of the game, given the rivalry and the political tension between the two nations at the time, forced the close contest where both sides battled with strength, but ultimately, the USA prevailed, leading to commentator Al Michaels' call of “Do you believe in miracles?”.

The Americans ended up winning gold at the Games after beating Finland 4-2 in its final game while the Soviet Union settled for bronze, beating Sweden 13-1.