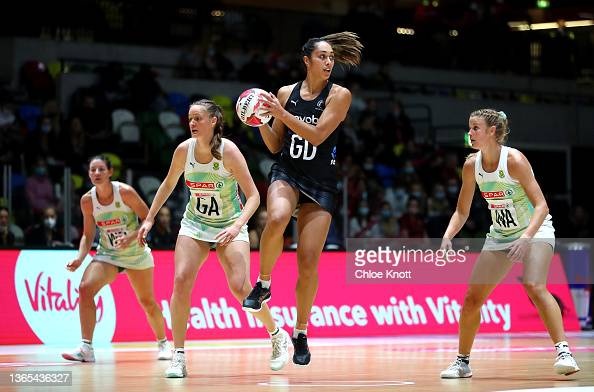 Silver Ferns get first win of the Quad Series

The Silver Ferns get their first win of the 2022 Quad Series, comfortably beating the South African Proteas. The teams will play again tomorrow.

Silver Ferns get first win of the Quad Series

The Silver Ferns get their first win of the 2022 Quad Series, comfortably beating the South African Proteas. The teams will play again tomorrow.

The Quad Series’ two winless teams met for the first time today. Even after their loss to the Australian Diamonds and English Roses, the Ferns are still the favourites in this match-up.  A win would be historic for the South African Proteas, only beating the Silver Ferns once in 1995.

The last time South Africa and New Zealand played was over two years ago, at the 2020 Netball Nations Cup. Both teams look very different now, losing some of their star players since. These veterans have been clearly missed in the Quad Series, with the teams consisting of several less experienced players.

Karaka started the match off with an early intercept, leading to Nweke putting the first point on the board. The second point was a battle, with four turnovers before New Zealand were able to sink the ball.

Halfway through the first quarter, South Africa made their first change, swapping Venter into goal attack and putting Burger in at goal shooter. Still, the attack side was still facing issues, with Fitzpatrick and Karaka capitalising against their mistakes.

In the Proteas' previous games, the attacking side of the mid-court were putting the work in. Msomi and Griesel were the top players in the tournament for feeds, with a large percentage of the feeds leading to an attempt. Their efforts were unfortunately limited due to the Fern's defence, which is something to work on for the Commonwealth Games.

In the final 15 seconds of the quarter, Nweke was able to score, solidifying the Fern’s lead 15 - 9. The quarter saw some scrappy play by both teams, something both coaches wanted to be sorted out for the second quarter.

Metuarau replaced Wilson at goal attack midway through the second quarter. A partnership between Nweke and Metuarau is something that Taurua has clearly been working on in the lead up to the Commonwealth Games. The second-quarter score was similar to the first, 16-10, despite the efforts of the Protea’s defence.

Mila Reuelu-Buchanan made her debut in the third quarter for the Silver Ferns. Reuelu-Buchanan was part of the 2017 U21 World Cup winning team alongside silver Ferns teammates Kelly Jury, Tiana Metuarau and Maia Wilson.

ROSES CONTINUE TO BE THE THORN IN THE SILVER FERNS’ SIDE

By the fourth quarter, the Ferns lead had continued to increase, now 43-28. The Proteas are yet to win a quarter in the series, with their biggest deficit 11 points in their second quarter against the Roses.

Winning a quarter would be a big confidence booster for the Proteas after their performance in the Quad Series. They came out strong against a tiring Ferns in the fourth quarter, winning it 16 - 11.

In her first full game since her return, Phoenix Karaka was awarded Player of the Match. She had the first gains of the match (6) and two deflections. As Dame Noeline Taurua explained in the post-match interview, the team “turned over some good ball” in defence and worked together well.

The Silver Ferns and Proteas will play again tomorrow at 6:30 AEDT in the Quad Series third-place decider.